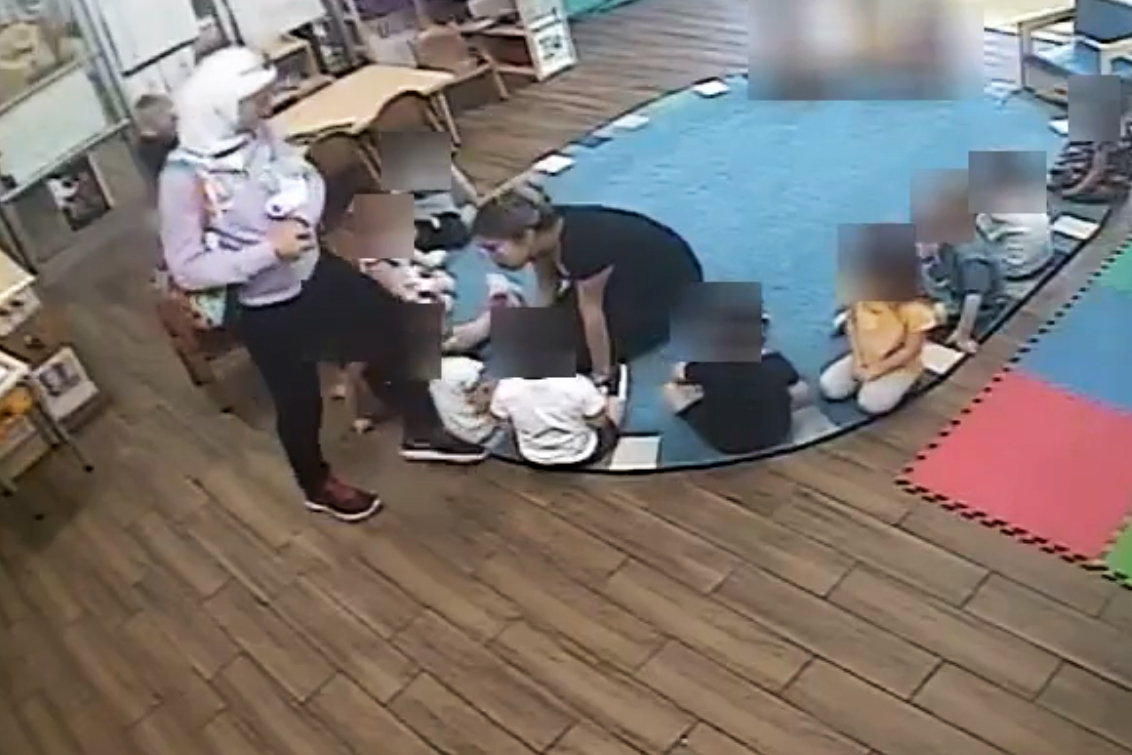 Two preschool teachers in Georgia were arrested this week for alleged child cruelty that was captured on a classroom livestream, police said.

Zeina Alostwani, 40, and Soriana Briceno, former teachers at the Parker-Chase Preschool in Roswell, were arrested and charged Monday with first-degree child cruelty, according to statement from Roswell police.

The alleged physical contact between the teachers and students, ages 2 and 3, occurred on Thursday and was seen by a parent monitoring the livestream, police said.

“That parent reported logging onto the camera system and seeing concerning physical contact between Alostwani and Briceno against several children in the classroom,” police said.

The video, which is slightly more than one-minute long, was provided to NBC News on Wednesday by police.

It shows several children sitting around a circular rug. The footage appears to capture one teacher step on a child’s hand for several seconds and then knee a second child in the back.

It also appears to show a second teacher who is on all fours, get extremely close to a child’s face and poke the child’s forehead with a finger. The child who was poked is the same child who only moments earlier was kneed in the back by the first teacher.

It was not clear Wednesday afternoon if either Alostwani or Briceno had retained attorneys. They could not be immediately reached for comment. Their relatives were also not available.

A statement from the company that oversees the preschool, Endeavor Schools, said the teachers on the video have been dismissed.

“We were shocked and disappointed to learn that … teachers in the Parker-Chase Pre-Primary B classroom used inappropriate disciplinary actions with children,” the statement said. “The teachers in question were immediately removed from the classroom and have been dismissed. We reported this matter to our licensing agency and Children’s Protective Services and are cooperating fully with the authorities, who have informed us that criminal charges are being pursued. While we are extremely grateful that the children are well, we take this matter seriously, and our investigation is ongoing. We expect our staff to adhere to the highest standards of care, and any failure to do so will not be tolerated.”

NBC affiliate WXIA of Atlanta reported Gloria Barghi, a mother of one of the preschoolers, said intuition prompted her to look in on the classroom from an app on her phone.

“I pulled up the app. I picked it up right when the lead teacher was assaulting the first victim.”

Barghi and her husband, Brant Duncan, immediately raced to the preschool, checked on their son, demanded to see the entire video of what they’d just seen live, the news outlet reported.