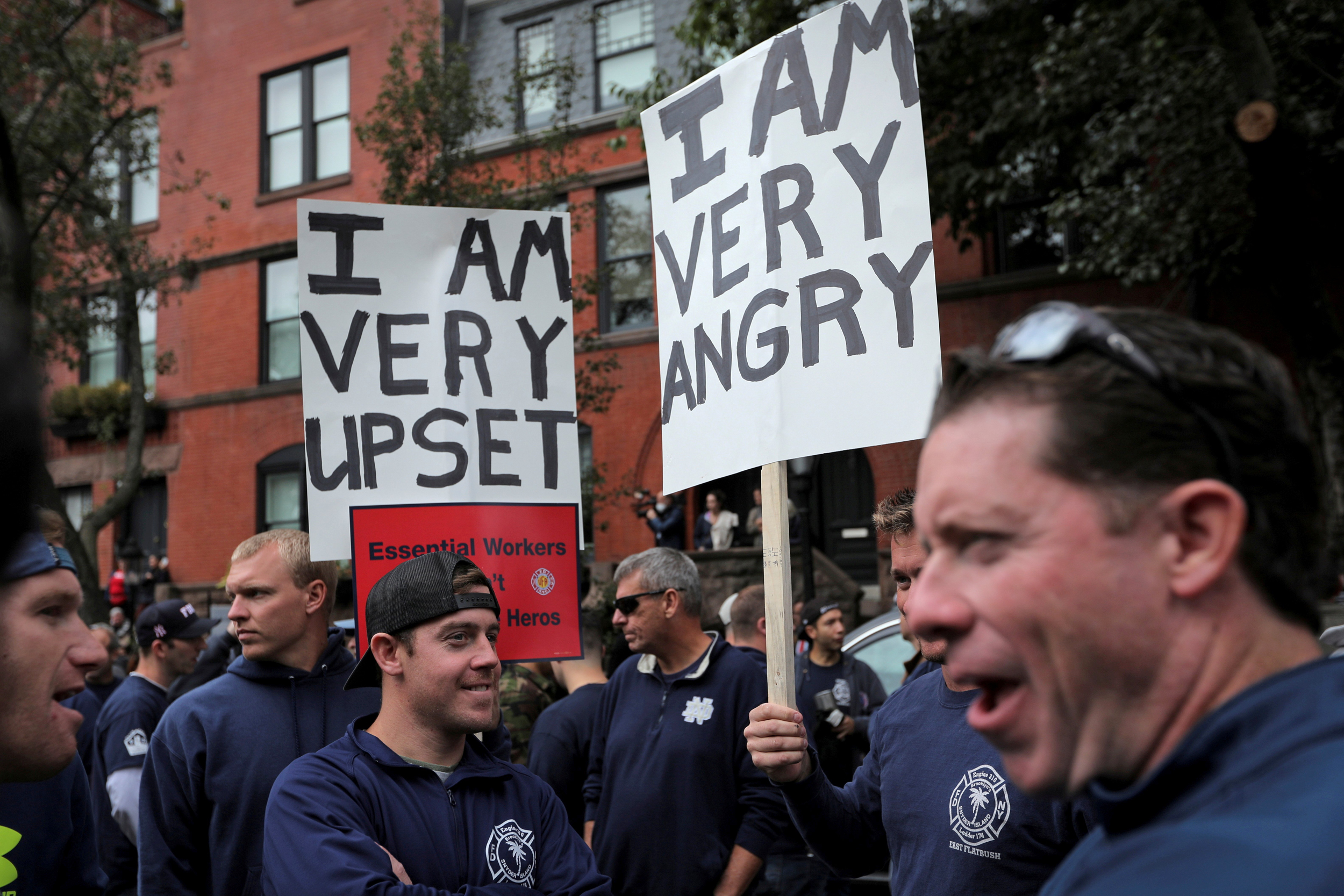 More than 2,000 New York City firefighters have taken medical leave in the past week as unvaccinated municipal workers face the start of sanctions Monday.

Frank Dwyer, deputy commissioner of the New York City Fire Department, said by email that the number of firefighters on medical leave was “very unusual.” The department employs roughly 11,000 firefighters.

Some first responders in the U.S. have been relatively resistant to employers’ Covid-19 vaccination mandates, with some saying they would rather lose their jobs than lose their sense of freedom over having to be inoculated.

Fire Commissioner Daniel A. Nigro suggested in a statement Sunday that firefighters who participated in the apparent sickout were neglecting their oaths, which commit them to “faithfully discharge the duties” of their jobs. Those who do not meet the vaccination requirement have been threatened with unpaid leave starting Monday.

“Irresponsible bogus sick leave by some of our members is creating a danger for New Yorkers and their fellow Firefighters,” Nigro said. “They need to return to work or risk the consequences of their actions.”

Nigro, however, refuted news reports and politicians’ claims that the staffing challenge has forced the department to close a number of firehouses. U.S. Rep. Nicole Malliotakis, R-New York, said in a statement Saturday that 26 city fire stations have closed.

“The department has not closed any firehouses,” Nigro said.

The department said fire companies — groups of firefighters composed of specialized teams — open and close regularly but might face more closures than usual. The FDNY was prepared to shut down 20 percent of them while deploying private emergency medical response services to help out, it said.

Malliotakis said New Yorkers were being left without a safety net as the city and its firefighters stand off over the mandate.

“God forbid there is a major fire, or a severe car accident, or if a crime takes place, or even worse,” she said as she pointed out a firehouse she said was temporarily without a ladder company because of staffing shortages.

Andrew Ansbro, president of the Uniformed Firefighters Association, blamed city officials and suggested the vaccination requirement could have been staggered among groups of firefighters to avoid staffing shortages.

“My members have not been given the proper opportunity to be informed by the department or the city what’s going to happen to them,” he said.

Ansbro acknowledged the increase in sick days taken by firefighters but said many could be attributed to firefighters getting vaccinated and experiencing flu-like symptoms afterward.

In an information page on Covid-19 vaccines, the U.S. Centers for Disease Control and Prevention does not use the term “flu-like” to describe symptoms or effects. It does say, “Side effects can affect your ability to do daily activities, but they should go away in a few days.”

The New York Police Department did not immediately respond to a question about the number of officers who have taken medical leave in the last week.

The union that represents rank-and-file officers, the Police Benevolent Association, said it has filed a lawsuit challenging the vaccine mandate.

Mayor Bill de Blasio expressed some optimism about the situation Saturday, tweeting that 91 percent of city employees had so far been vaccinated. The deadline for many workers to get at least one dose was Friday.

The NYPD reported that 84 percent of its employees, civilian and sworn, were vaccinated. The fire department’s figure was 80 percent, according to NBC New York.