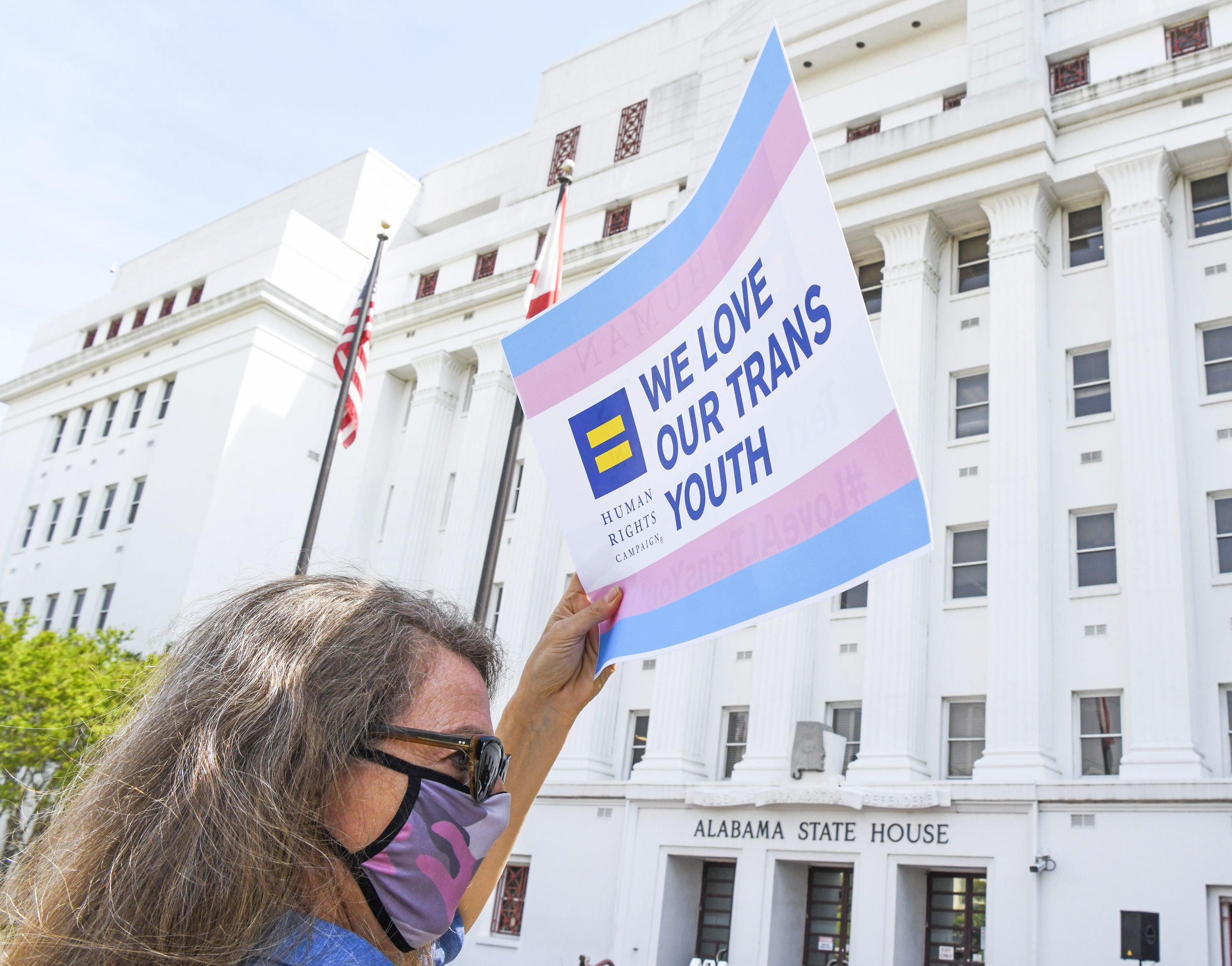 The Alabama Legislature passed two bills Thursday that are a mash-up of similar bills in other states that target LGBTQ classroom discussion and transgender youth.

On the last day of the legislative session, the Alabama Senate passed what LGBTQ advocates have described as a combined “bathroom bill” and “Don’t Say Gay” bill. The bill, HB 322, would bar transgender students from using sex-segregated school facilities that align with their gender identity, similar to a contentious measure that was passed in North Carolina in 2017 and later partially repealed after a number of corporations threatened to pull their business out of the state.

Just before passing the bill, the Senate added an amendment that prohibits classroom discussion of sexual orientation and gender identity in grades K-5 — adopting language used in a bill recently signed by Florida Gov. Ron DeSantis that critics have dubbed the “Don’t Say Gay” bill.

A few hours later, the Alabama House passed SB 184, a bill that would make it a felony for parents and medical professionals to provide gender-affirming medical care, such as puberty blockers, hormones and surgery, to people 18 and under in the state.

SB 184 has been approved by both chambers and now heads to the desk of Gov. Kay Ivey. The House will have to approve the amended version of HB 322 before sending it to the governor. Ivey, a Republican, hasn’t said whether she will sign either of the bills, but she signed a measure last year that bars transgender girls and women from playing on female school sports teams.

Republican Rep. Scott Stadthagen, the sponsor of the bathroom bill, said the bill is meant to protect girls.

“It’s a problem that was brought to my attention the last fall,” he told a Senate committee on Tuesday. “The bill is short and sweet. It says whatever your original birth certificate states as your gender, that is the bathroom you use in K-12 schools.”

Alabama resident Vanessa Tate Finney, the mother of a 13-year-old transgender boy, told the committee that there’s no evidence to support Stadthagen’s claim, and that the bill was targeting trans youth for the sake of politics.

A 2018 study from the Williams Institute at UCLA School of Law found no proof that letting transgender people use the public facilities that align with their gender identity increases safety risks.

The bill is among the first bathroom bills passed by a state legislature since North Carolina partially repealed HB 2 in 2017.

Alabama may also become one of just a few states to restrict gender-affirming medical care if Ivey signs that bill.

During debate on the health care bill, its sponsor, Rep. Shay Shelnutt, a Republican, compared gender-affirming medical care to vaping and getting a tattoo, saying that minors should be barred from engaging in activities that might harm or alter their bodies. He said the state has a “responsibility” to protect children.

Rep. Neil Rafferty, a Democrat and the only LGBTQ representative in the state, said the health care bill is “undermining family rights,” which Republicans often champion.

Only two other states — Arkansas and Tennessee — have similar laws on the books, though a judge blocked Arkansas’ law in July. As of March, 13 states, including Alabama, were considering bills that would bar gender-affirming care for trans youth, which could jeopardize care for an estimated 42,950 transgender youth, according to the Williams Institute.

Should Ivey sign the transition care bill, it will face legal challenges. The American Civil Liberties Union, the ACLU of Alabama, Lambda Legal, the Transgender Law Center and the California-based firm Cooley LLP announced Thursday — hours before the bill passed — that they plan to sue the state.

“If Alabama lawmakers insist on passing this cruel, dangerous, and unconstitutional legislation into law, the state will immediately have a lawsuit to deal with,” Sruti Swaminathan, staff attorney for Lambda Legal,” said, according to a news release. “The Alabama Legislature and Governor Kay Ivey need to consider the time and resources they will invest, not to mention the stain of discrimination that often means lost opportunity and investment, and ask themselves if targeting the health care of children is truly worth it because we are prepared to make that investment in order to protect transgender youth, their families, and their doctors in Alabama.”

Another group of civil rights organizations, including the Southern Poverty Law Center, the National Center for Lesbian Rights, GLBTQ Legal Advocates & Defenders and the Human Rights Campaign also announced that they plan to challenge the bill, if Ivey signs it, on behalf of two medical care providers and multiple families who would be harmed by it.

“The passage of this bill means that families who love Alabama and call it home will have to move away to ensure their children receive the basic medical care they need,” Dr. Morissa Ladinsky, one of the providers who would be represented in the suit, said, according to a news release. “The parents demonized by SB 184 are kind, loving, and supportive. They come from every corner of Alabama. This bill puts doctors like me in the untenable position of choosing between ignoring the medical needs of our patients or risking being sent to prison.”

Ladinsky, an associate professor of pediatrics at the University of Alabama at Birmingham and a co-lead of UAB Pediatrics’ gender health team, told NBC News last month that the bill could affect about 150 of her patients, both those in Alabama and those who come from Mississippi, the Florida Panhandle, Georgia and Tennessee.

Her team told emergency rooms across the state to be “on high alert” should the bill progress, because she expects suicide attempts by trans youths to increase. She pointed to Arkansas, where the Legislature overrode Gov. Asa Hutchison’s veto of a bill to ban gender-affirming care for minors last year.

In the week after the veto override, Ladinsky said five youths who had been receiving gender-affirming care at the Arkansas Children’s Hospital in Little Rock showed up in the hospital’s emergency department after they attempted suicide.

“This is not hypothetical,” she said. “Just look at Arkansas.”

The legislation appears to be having a more widespread impact on the mental health of LGBTQ youth, generally, as well. A poll released in January by The Trevor Project, an LGBTQ youth suicide prevention and crisis intervention group, and Morning Consult found that 85 percent of transgender and nonbinary youth and and two-thirds of all LGBTQ youth say recent debates about state laws restricting the rights of transgender people have negatively affected their mental health.