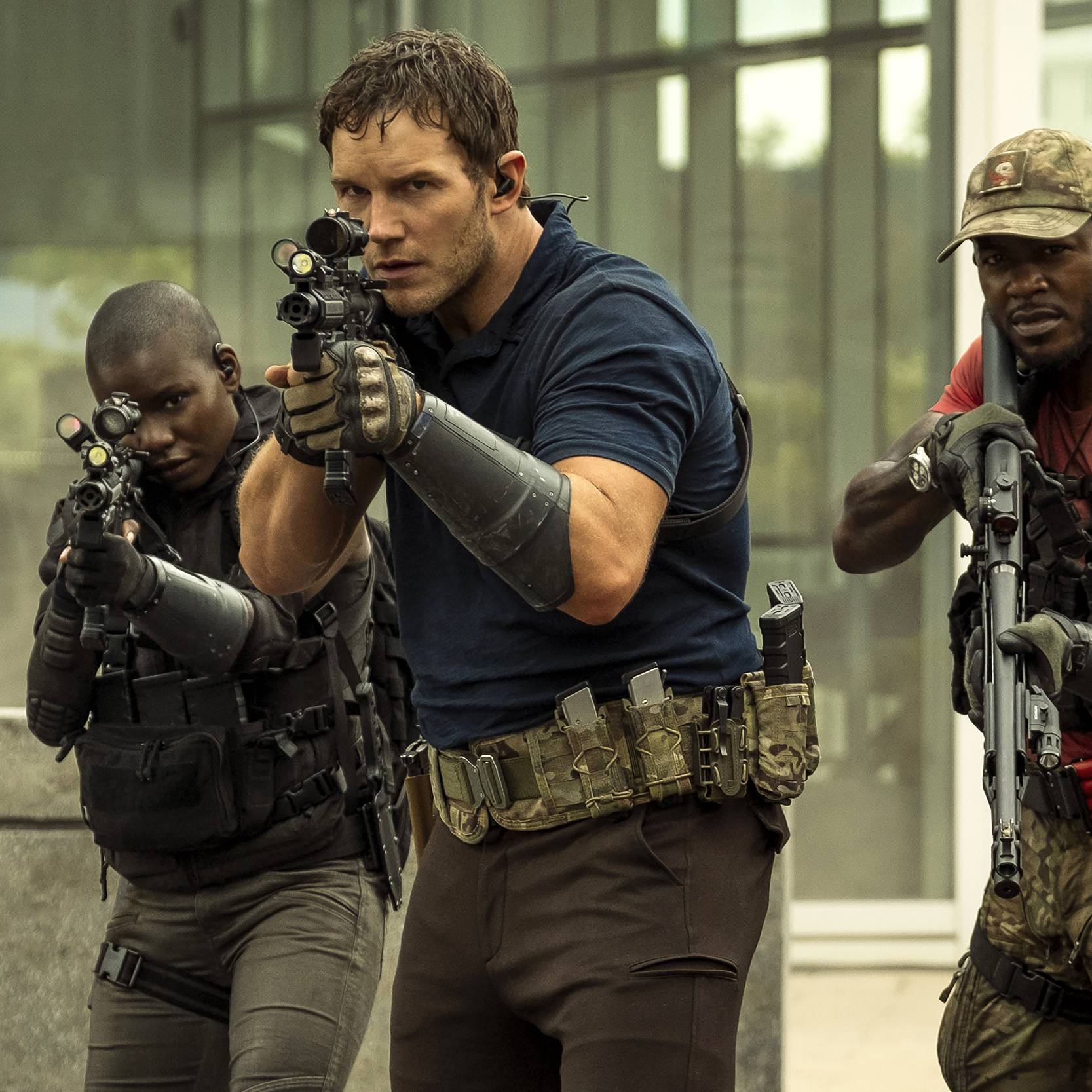 Originally intended for theaters, “The Tomorrow War” — which premieres on Amazon on Friday — was a casualty of the pandemic-induced shutdown. Conceived as a holiday blockbuster release (it even opens with a scene at a holiday party that references “It’s A Wonderful Life”), it was shunted down the schedule to midsummer of 2021 before falling off the theatrical calendar completely. (Amazon Studios eventually announced that it had acquired the film for a streaming release in April.)

Not that this is a bad thing: The film itself is a tired, derivative, pro-military-and-guns wannabe sci-fi film that will remind audiences of better, older sci-fi action adventure films also on streaming (which they can flip to for free at any time). Had it landed in theaters, it’s hard to imagine it would’ve been more than also-ran at best — the last gasp of a certain kind of would-be blockbuster that glorifies the military-industrial complex, whose job as propaganda recruitment for young impressionable men has been mostly usurped by videos games in the last two decades.

The movie’s best hope for attracting paying theatergoers was that it starred one of the Hollywood Chrises, a group of four light brunette, male 30-something actors named Chris — Pine, Evans, Pratt and Hemsworth — whose existence as A-listers despite a tendency to play the same roles repeatedly had become a meme of sorts. Of those four, it starred the most openly Christian right-wing Chris of the group, Pratt, who also acted as an executive producer on the film.

The concept behind “The Tomorrow War” is a mishmash of other, better films that once brought audiences into the theaters in droves before the arrival of streaming. Earth has been invaded by aliens, à la “Independence Day.” Said invasion is actually occurring in 2051, so the children of the next generation who haven’t been born yet have been sent back via wormhole in search of help with a last stand, à la “Terminator.” The army then sends tactical units through this wormhole into an unknown future on the other side, à la “Stargate.” In that future, the human race is nearly dead, and any new, old-timey recruit who doesn’t have muscles on top of their muscles is quickly reduced to cannon fodder for the scorpion-esque invaders — it’s shades of “Starship Troopers” and “Mars Attacks,” but without the parody humor.

Somebody in the future states they are glad Will Smith did not live to see this. Too bad that, in the present, he did.

Pratt plays Dan Forester, an ex-military retiree who has become a biology teacher. (He has long batches of dialogue where he narrates everyday actions in scientific terms — you know, as smart people do.) He, like many people, becomes part of the worldwide draft, in which anyone who is no longer alive by 2051 is thrown into the future and their endless war. (The movie’s commitment to keeping time paradoxes to a minimum is commendable.) Of course, the moment he whips off his shirt post-draft, Pratt suddenly goes from bumbling scientific smart guy to magical badass who can command a team of random civilians with the strength of his perfect beard stubble.

After this, the movie feels like it just keeps checking off boxes from other movies you barely remember: Oscar-winner J.K. Simmons shows up as Pratt’s paranoid, conspiracy-minded, ex-military father, who ends up being one of the film’s other heroes. There are generals who, naturally, take credit for stuff done by actual heroes. The solution to the forever war is enthusiastically burbled by a 14-year-old who, upon realizing the fate of human race rests of his small shoulders, announces “Hand me a laptop!”

Oh, and of course, there’s climate change as the sneaky last-minute villain you totally knew was coming.

“The Tomorrow War” may not have been made with a streaming release in mind, but that it wound up there is probably the appropriate outcome. Netflix had already been quietly stepping into the business of making these once reliable box office generators, and even has a few pro-military action type films — including “Extraction” starring another Hollywood Chris (Hemsworth).

Pratt’s film is probably slightly less likely to make waves than “Extraction,” both because of its quality and because it’s on Amazon — which mostly still treats its trillion-dollar cash cow like a flea market with a movie room attached. Still, fans of Amazon’s action series (like “Tom Clancy’s Jack Ryan,” from another sitcom-turned-action guy) will probably find “Tomorrow War” a fun way to spend a couple of hours on a holiday weekend in the air conditioning, without having to mask up, pay for movie tickets or leave the house.