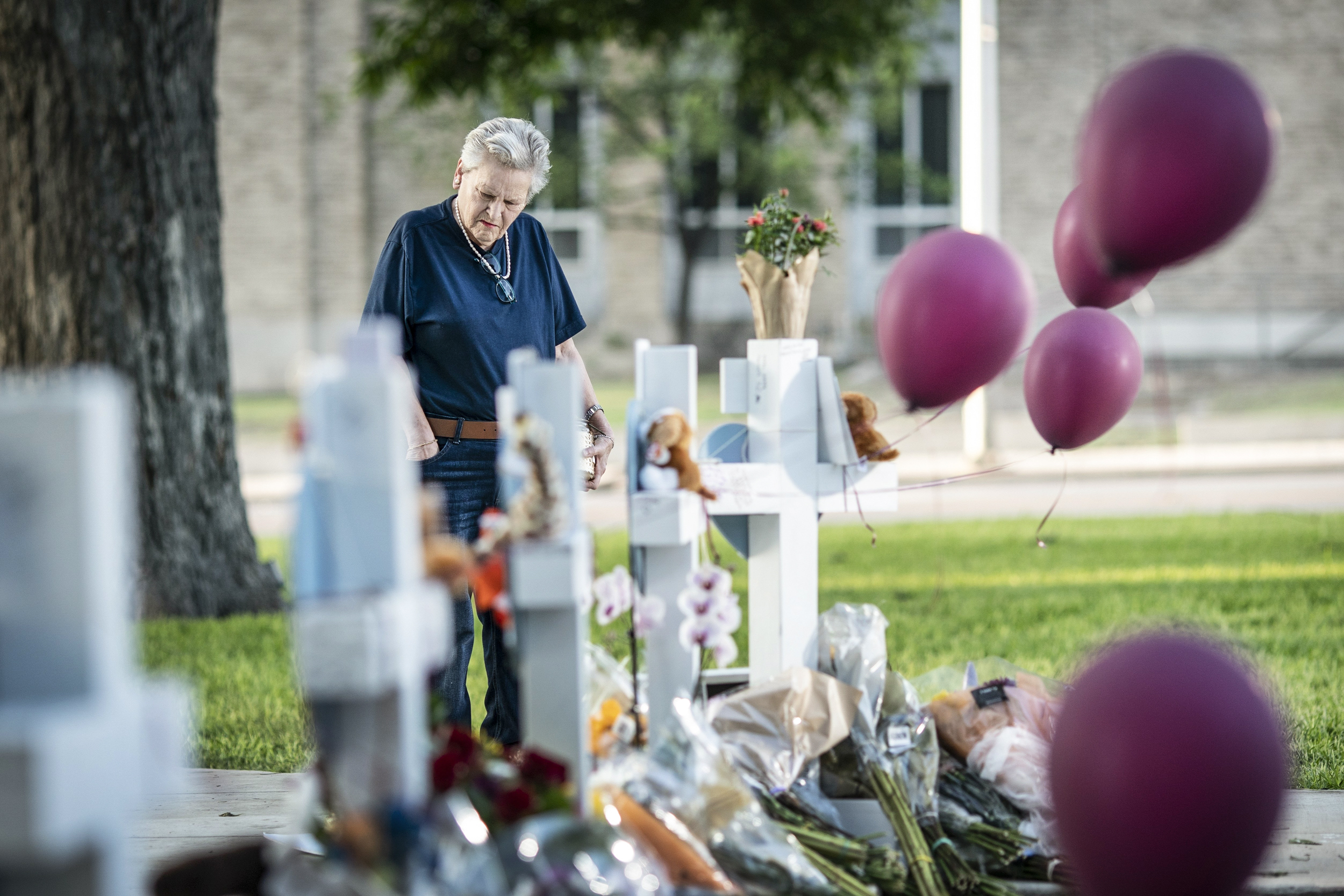 UVALDE, Texas — The afternoon heat eased as the darkness arrived. The sorrow persisted.

Distraught families remained in Uvalde’s town square well after midnight and into the early morning Thursday.

In the evening, some stood in front of white wooden crosses with light blue hearts, one for each of the loved ones killed in the shooting Tuesday at Robb Elementary School.

Later, with almost all of the TV cameras and reporters gone, they relaxed more in one another’s company, sharing some laughs as they avoided in-ground water sprinklers swishing across the grass, soaking them and the memorials. At their behest, a maintenance worker arrived to shut off the water.

Profound despair manifested itself in reddened faces, weary and tearful eyes, the soft sobs of adults and the haunting cries of children.

Roses of various colors — red, white, yellow with red tips, pink — and bouquets of other flowers were piled at the foot of each cross, tokens from family, friends, residents and out-of-towners. The pile grew as the light disappeared from the day.

There were candles, some with religious symbols such as the Virgin of Guadalupe, balloons and stuffed toys.

A basketball, a Baby Yoda doll and a bag of Flipz snacks were left, some of the small attempts to conjure a picture of the qualities and traits of the 19 children and two teachers who were killed. People wrote tributes on the hearts and crosses.

“It’s like the whole community, we’re in a trance,” said a Uvalde mental health worker who did not feel comfortable sharing her name.

Another Uvalde resident, who is also not being identified for privacy reasons, said the community came out to support him when his son and a friend were killed in a car accident nine years ago.

He wanted to give back some of the same support.

“I feel their pain,” he said. He knew about 10 of the children who were killed and their families, and was friends with Irma Garcia, one of the slain teachers, and her husband, Joe, who collapsed and died Thursday.

Those who knew Joe Garcia said he died of heartbreak.

“We suffer every day,” the friend said. “We live praying the rosary every day asking for God to heal our hearts and our minds.”

Suzanne Gamboa is a national reporter for NBC Latino and NBCNews.com