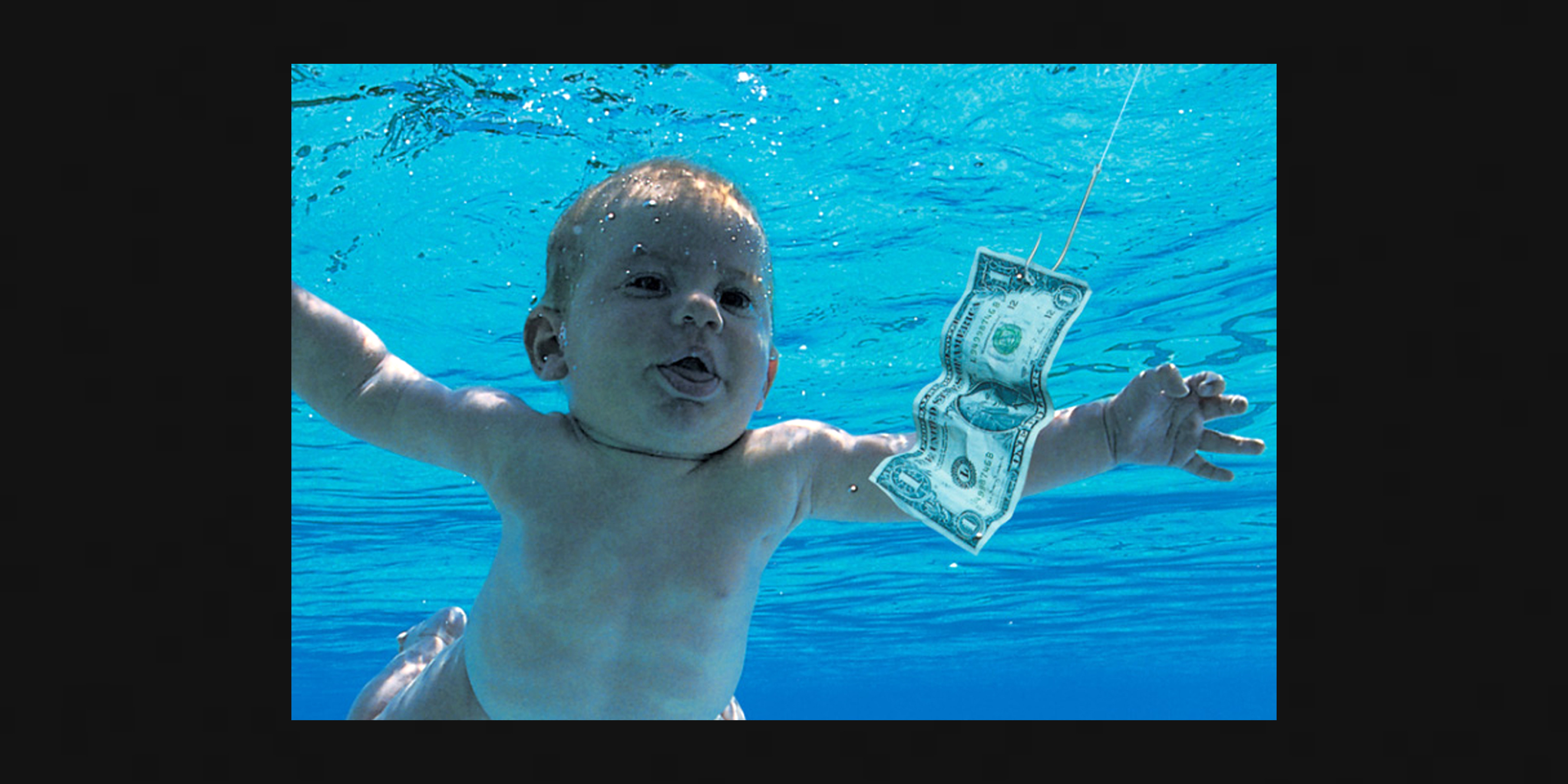 Never mind the lawsuit against Nirvana.

A case filed Tuesday alleges that the grunge rock band engaged in commerial child pornography when it used a photo of a naked baby on the cover of its iconic album “Nevermind” in 1991. The group went on to sell some 30 million copies of the record, meaning that a large percentage of the population could be at risk for possessing an image of child sex abuse by owning the album, if the suit succeeds.

Fortunately for Nirvana fans, it likely will not.

Nirvana most likely wouldn’t be liable for the picture on their cover, but readers googling this photo to see it for themselves do so at their own peril.

When Spencer Elden was four months old, he was dunked in a swimming pool as part of a photo shoot for the album. The cover ended up featuring him and his clearly visible penis underwater as he appeared to chase a dollar bill dangling at the end of a fishing line. Elden, now 30, claims this means Nirvana knowingly produced, possessed and advertised commercial child pornography with his image, and they knowingly received value in exchange for doing so. The plaintiff is seeking monetary damages authorized by the federal criminal law prohibiting, and defining, child pornography.

But child pornography doesn’t describe just any picture with naked minors. It means any visual depiction of “sexually explicit conduct,” where the production involves the use of a minor engaging in such conduct. And that conduct is defined as involving sex acts or simulation, as well as “lascivious exhibition” of the genitals.

Courts recognize that the term “lascivious exhibition” is difficult to define. It requires an image-by-image assessment using a test developed by a California federal court in 1986, which considers several factors, most of which appear to weigh against a finding of child pornography on the album cover.

First is the question of whether “the focal point of the visual depiction” is on the child’s genitalia. While it certainly is visible on the album cover, there are also a lot of other things on the cover, as described in the complaint: a hook, a dollar bill, the face of the swimming baby. Even the underwater setting could be described as a focal point.

The next factor also weighs against the plaintiff: whether the “setting of the visual depiction is sexually suggestive.” In other words, whether it’s a place or pose generally associated with sexual activity. The location — a swimming pool — is not traditionally associated with sex, the way a bordello or even a bedroom might be.

Elden alleges he was depicted swimming after a dollar bill, which suggests baby prostitution. But if the photo itself isn’t sexually suggestive, it can’t suggest that the consequence of getting the dollar bill is in exchange for sex.

Courts also consider whether the subject is in an unnatural pose or inappropriate attire for the age of the child. If a baby immersed in a pool is an “unnatural” pose, what about a baby in a bathtub? If so, that would not bode well for all the parents who snap a pic of their baby during bath time.

The fourth factor is whether the child is nude or clothed, and here there’s no question the baby on the album cover is nude. But does full nudity, in this context, make it any more sexually suggestive than if he were wearing clothing? Indeed, there’s an argument to be made that certain kinds of mature, sexualized clothing might be more sexually suggestive than full nudity.

The fifth factor might be the plaintiff’s strongest argument, but it’s still not a slam dunk. The plaintiff might argue that swimming in the nude after a dollar bill suggests a willingness to engage in sexual activity — namely, prostitution. Still, if an adult male was depicted nude and swimming after a dollar bill, would it categorically imply prostitution? Probably not, especially when the adult was not positioned in a sexually suggestive manner.

Finally, the court will consider “whether the visual depiction is intended or designed to elicit a sexual response in the viewer.”This can be the trickiest factor. It speaks of the intent behind the photo, but it’s really measured by the response of the viewer. Is it enough if any viewer has a sexual response? Or must it be a universal response? As if this weren’t complicated enough, the federal appeals court for California acknowledges that no one of these factors is conclusive.

Here’s an example of how hard it can be to define child pornography: In 2017, the Texas Supreme Court considered a digital photo of an existing photograph of a three-year-old girl wearing no underwear under her dress, sitting on a bench. That court concluded the photo depicted the “lewd exhibition” of a child’s genitals, for a conviction of possession of child pornography.

The defendant had zoomed in on his photo of the photo, and cropped it to show a close-up of the girl’s genitals. Gross. According to the court, once he cropped the image, the girl’s genital area became the “focal point,” and was intended and designed by the defendant — not Mapplethorpe, apparently — to elicit a sexual response in the viewer (himself).

What this case suggests is that if someone pulled up the Nirvana album cover on their iPhone, zoomed in on the baby’s genitalia, and cropped it, that person could create and possess child pornography — even if the original photo is not child pornography. According to this court, there is potential child pornography within any lawful photo of a child playing in the bathtub. That means Nirvana most likely wouldn’t be liable for the picture on their cover, but readers googling this photo to see it for themselves do so at their own peril — especially if it’s cropped somewhere online.