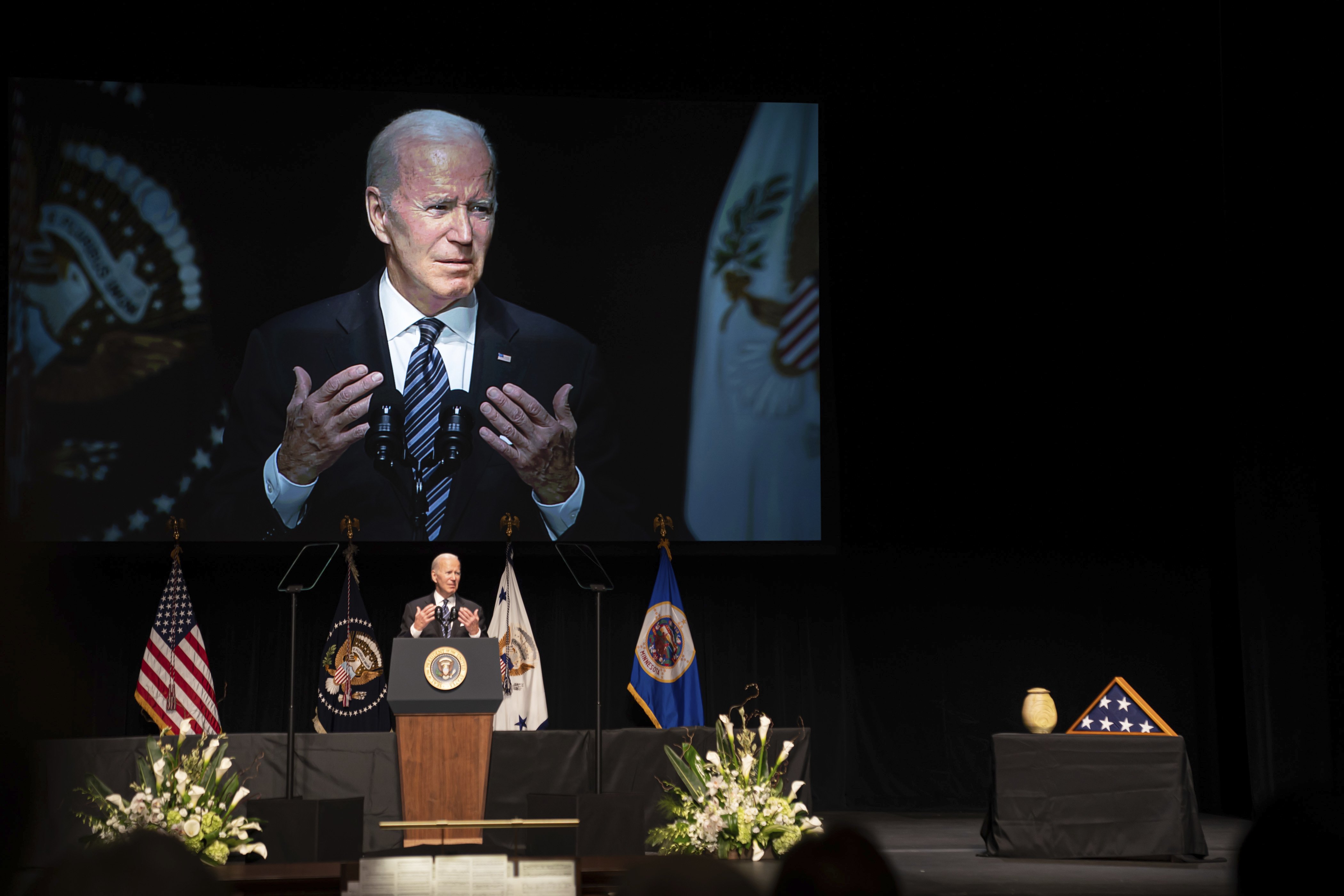 MINNEAPOLIS — President Joe Biden saluted his “friend of five decades” Walter Mondale on Sunday, traveling to the University of Minnesota to remember the former vice president and Democratic Party elder whose memorial service was delayed for a year due to the pandemic.

Mondale died in April 2021 at age 93. He is credited with transforming the office of the vice presidency — which Biden himself held for eight years under President Barack Obama — expanding its responsibilities and making himself a key adviser to President Jimmy Carter.

Mondale “was a giant in American political history,” Biden said of Mondale, known to friends as “Fritz.” He added that Mondale was one of the “toughest, smartest men I’ve ever worked with” both as Senate colleagues and as a mentor when Biden was Obama’s No. 2 and then later as president.

Biden emphasized Mondale’s empathy, recalling his own promise during the 2020 presidential campaign to unite the country. That’s something the president has strayed from a bit in recent weeks, as he seeks to draw a starker contrast between his administration and congressional Republicans who have opposed it on nearly every major issue.

“It was Fritz who lit the way.” Biden said. “Everybody is to be treated with dignity. Everybody.”

Biden added of Mondale: “He united people sharing the light, the same hopes — even when we disagreed, he thought that was important.”

“It’s up to each of us to reflect that light that Fritz was all about.”

The invitation-only, 90-minute service Sunday inside a stately campus auditorium featured plentiful organ music. Biden, who received a standing ovation, said he spoke with Mondale’s family beforehand and “got emotional” himself.

Democratic Sen. Tina Smith called Mondale a “bona fide political celebrity” who still dedicated time to races large and small back in their home state. Minnesota civil rights icon Josie Johnson spoke of what a good listener Mondale was and how he championed inclusiveness.

Democratic Sen. Amy Klobuchar described once being an intern who climbed under chairs and a table to carry out a furniture inventory when Mondale was vice president.

“That was my first job in Washington. And, thanks to Walter Mondale, this was my second,” Klobuchar said of being a senator, noting that Mondale encouraged her to run and taught “the pundits in Washington how to say my name.”

Democratic Gov. Tim Walz said Minnesota may be better known as Mondale’s home state than its moniker “The Land of 10,000 Lakes,” and praised Mondale’s intellect, humility, humor and optimism.

“He embodied a sense of joy. He lived his life every single day,” Walz said. “At 91, he was still fishing for walleye. Unlike me, he was catching some.”

A booklet given to attendees for the “afternoon of remembrance and reflection” quoted from Mondale’s 2010 book, “The Good Fight”: “I believe that the values of the American people — our fundamental decency, our sense of justice and fairness, our love of freedom — are the country’s greatest assets, and that steering by their lodestar is the only true course forward.”

Its back cover showed Mondale’s face next to the slogan, “We told the truth. We obeyed the law. We kept the peace,” which Klobuchar described as being memorialized after the then-vice president said them at the end of the Carter administration.

Mondale was a graduate of the University of Minnesota and its law school, which has a building named after him. During Sunday’s remembrance, Biden wiped his eyes as a performance of “Tomorrow” from the musical “Annie” played, and the service closed with the university’s marching band, which sent people away with the “Minnesota Rouser” fight song.

Mondale followed a trail blazed by his political mentor, Hubert H. Humphrey, serving as Minnesota attorney general before replacing Humphrey in the Senate. He was Carter’s vice president from 1977 to 1981.

Mondale also lost one of the most lopsided presidential elections ever, to Ronald Reagan in 1984. He carried only Minnesota and the District of Columbia after bluntly telling voters to expect a tax increase if he won. But he made history in that race by picking Rep. Geraldine Ferraro, of New York, as his running mate, becoming the first major-party nominee to put a woman on the ticket.

Mondale remained an important Democratic voice for decades afterward, and went on to serve as ambassador to Japan under President Bill Clinton. In 2002, at 74, he was drafted to run for the Senate again after Sen. Paul Wellstone was killed in a plane crash shortly before the election. Mondale lost the abbreviated race to Republican Norm Coleman.