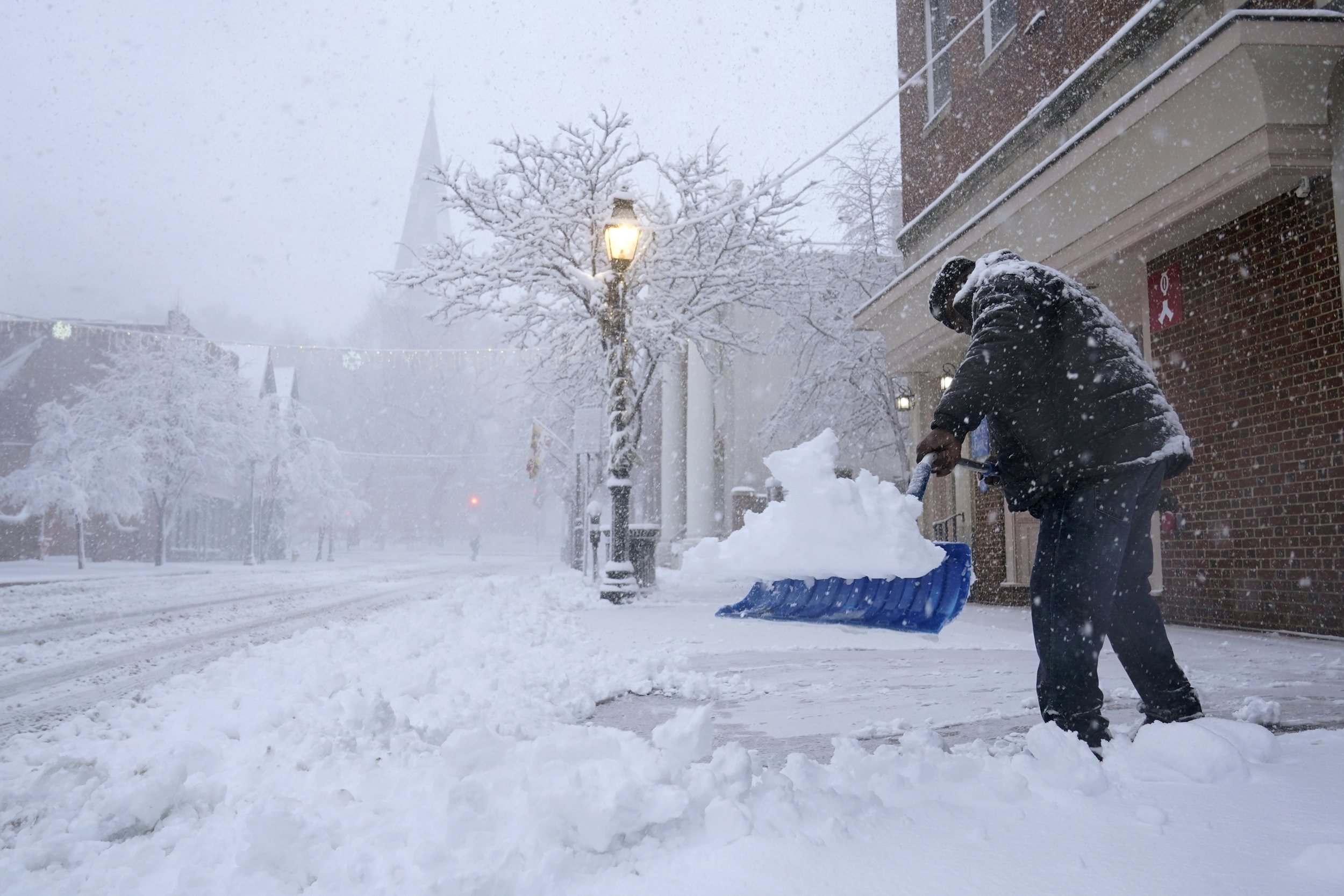 The biggest snowstorm for the Mid-Atlantic since 2019 will kick off the first full week of the New Year, where up to a foot of snow was possible across portions of Virginia, Maryland, Delaware and southern New Jersey.

On Monday morning, 29 million people were under winter alerts stretching from northern Georgia up through Cape Cod.

Overnight Sunday into Monday, accumulating snow was reported across portions of northern Alabama, northern Georgia, much of Tennessee and as far south as the Florida Panhandle.

By daybreak Monday, thundersnow had already been reported in Alabama, Tennessee, North Carolina, Virginia and Maryland.

Hundreds of thousands of customers lost power on Monday, including more than 344,000 in Virginia and 166,000 in North Carolina, according to PowerOutage.us, which aggregates data from utilities across the U.S.

Through the first half of the day on Monday, the snow was expected to be heavy at times, as heavy as 1 to 4 inches per hour, leading to quick accumulations on the roadways during the morning rush hour.

As the storm heads out to sea, it will clip Cape Cod with snow but at this time Boston is not expected to see any snow from this system.

A general swath of 3 to 6 inches of snow was likely from southern Virginia up through eastern Long Island. The heaviest totals of 6 to 12 inches was expected to be in a zone stretching from central Virginia (Fredericksburg area) up through southern New Jersey (Atlantic City).

A game of miles.

The highest uncertainty in snow totals was forecast to be across portions of southern Pennsylvania, central/northern New Jersey and New York City. This is where the sharp cut-off to the snow is expected to occur by midday on Monday. Where this tight snow gradient lands will determine how much snow Philadelphia and New York City get.

In other words, a distance of just 20 miles could mean the difference between accumulating snow and a dusting.

In addition to intense snowfall rates at times, wind gusts were forecast to be as high as 40 mph across parts of the Mid-Atlantic, especially southern New Jersey, which could lead to blizzard conditions and power outages.

Heaviest snow this morning through 12 p.m. If Washington can pick up more than 6 inches, it will have more snow this season than Chicago (6″) and Denver (5.9″) have seen so far.

Heaviest snow from 9 a.m. to 12 p.m. With Philadelphia on the northern edge of the storm, there is high uncertainty in their forecast.

Light to moderate snow from 12 p.m.- 3 p.m. With New York City also on the northern edge of the storm, high uncertainty remains how much the Big Apple will see.

Heaviest snow 11 a.m.- 4 p.m. combined with wind gusts up to 40 mph could lead to blizzard conditions.

This dynamic storm system has a severe thunderstorm side, too.

The southern side of the Mid-Atlantic snowstorm was producing severe thunderstorms Monday morning across the eastern Carolinas.

Monday morning featured a tornado watch for cities like Myrtle Beach and Cape Hatteras, where severe thunderstorms capable of damaging winds and isolated tornadoes charged through the eastern Carolinas. Flash flooding was also a concern.

To add more shock to the biggest snowstorm in years, the snow came on the heels of spring-like warmth over the weekend.

After highs Sunday soared into the 70s across the Southeast and 60s across the Mid-Atlantic and Northeast, highs on Monday will be 20-30 degrees colder.

These sharply colder temperatures could cause wet roadways to freeze Monday night into Tuesday morning, leading to icing concerns on roadways.