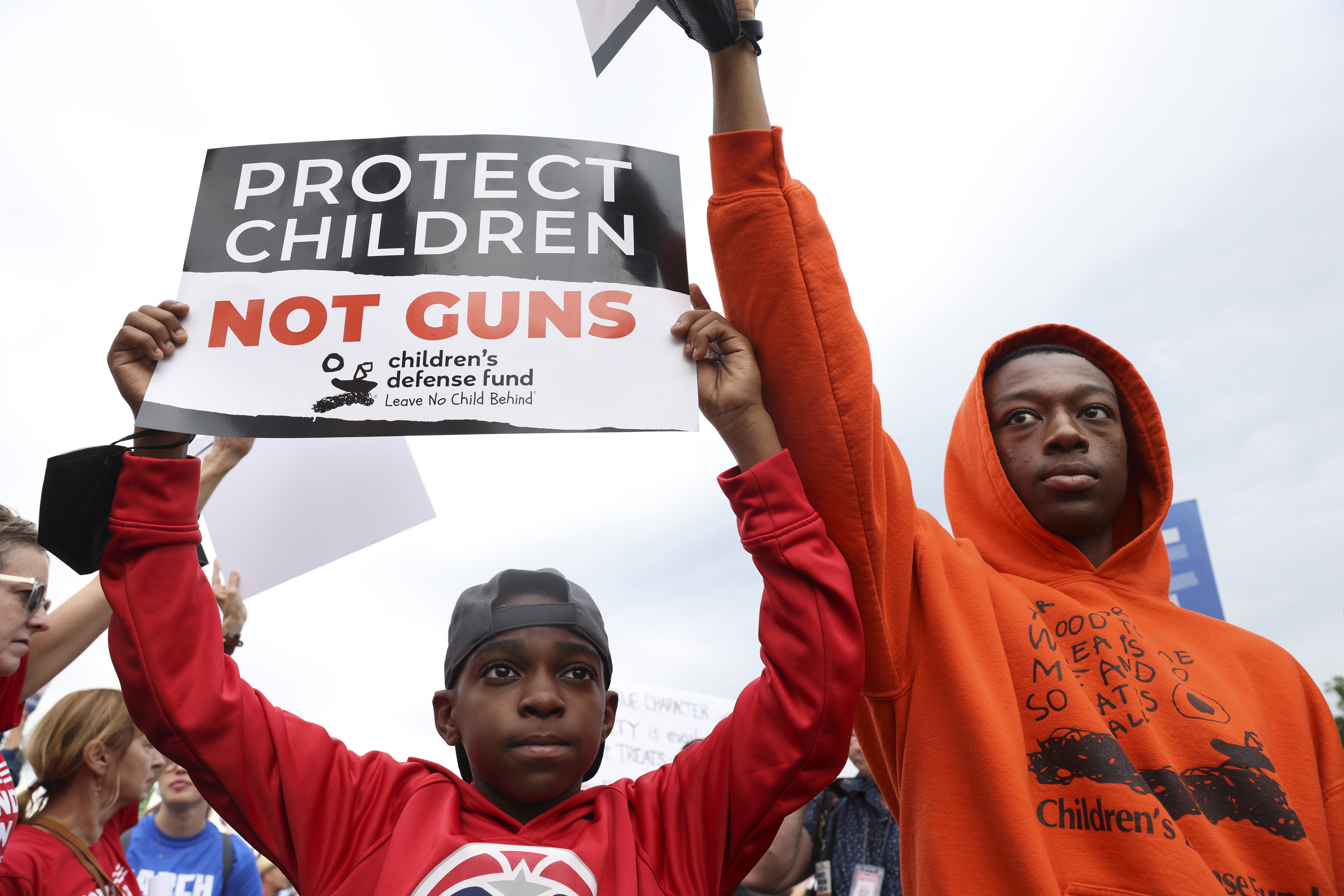 WASHINGTON — Senators working toward a landmark gun deal in the wake of the Uvalde, Texas, elementary school shooting have emphasized the need to boost funds for campus security. But the prospect of more police officers in schools is making some Black parents feel less safe.

“Uvalde shows that having law enforcement didn’t make a difference,” said Chinwe Kpaduwa, a Maryland mother of two boys. “There were 19 of them there. And they stood out for an hour while the kids were gunned down.“

Kpaduwa said she traveled to Washington, D.C., for last weekend’s March for Our Lives rally against gun violence after three episodes involving weapons at her children’s schools. Though neither of her children was in immediate danger, she said, the incidents rattled her, particularly given the shooting in Texas and an earlier one in Buffalo, New York, which targeted Black people.

Kpaduwa said that although there are school safety officers at her children’s schools, it doesn’t make her feel less worried.

In interviews with NBC News, other Black parents echoed similar concerns. And research supports their worries: A 2021 study from SUNY Albany and Rand Corporation found that while school resource officers can be linked to a decrease in certain types of violence, they do not prevent school shootings or gun-related incidents.

The study also found that officers “intensify the use of suspensions, expulsions, police referrals, and arrests of students,” and that Black students were more than twice as likely as white students to face disciplinary action.

In some of the most prominent mass shootings of the last decade — including the one in Parkland, Florida, that lead to the March For Our Lives movement — the presence of police or other security could not prevent the attacks.

Ashley Simpo, 38, who lives in the Bedford-Stuyvesant area of Brooklyn, New York, and has a 10-year-old son, said she has seen no evidence that police have created a safer community in her neighborhood, much less in schools.

“They provide a false sense of security for people who are not a target to police,” she said. “And they don’t actually prevent any chaos in my community.”

Simpo said that, a few months ago, a teenager was shot outside a high school in her neighborhood that has a heavy police presence. She said the case has not yet been solved.

“But I don’t think white people see that,” she added. So they find it comforting, she said, to know that their children’s schools have more armed security or more police presence in the wake of gun violence.

Some parents also worry that having more police in schools will expose their children to even more danger. Shane Paul Neil, whose 9-year-old son and 15-year-old daughter attend schools in Montclair, New Jersey, said that a day after the shooting in Uvalde, his town councilman announced that there would be an increased police presence at local schools. In a viral tweet, Neil remarked, “I now have two potential threats to be concerned over.”

Neil said many parents in his children’s school district were not receptive to the idea of having more police in schools, but for different reasons. White parents did not want more guns in schools, he said. Black parents, meanwhile, feared police interactions, particularly involving law enforcement and Black or brown students, could increase violence rather than curb it.

According to a recent report by the American Civil Liberties Union, which reviewed school arrests and referrals to law enforcement data, “schools with police reported 3.5 times as many arrests as schools without police.” As a result, disabled students and students of color “are most frequently criminalized.”

Angelina Ruiz, 25, a juvenile probation officer in Texas, said she has witnessed how more police presence in schools leads to the criminalization of students for minor issues that could and should have been addressed collectively by school administrators, parents or guardians and other support staff.

“I’ve came to this conclusion after speaking with youth and their families and the amount of referrals we are receiving for incidents that could have been dealt with by school officials,” she said.

As for the Senate framework, Ruiz said, the proposed measures are “a step in the right direction,” but more needs to be done. Other than more funding for school security, the latest version of the deal includes support for states’ red flag laws, expanded background checks for people ages 18 to 21 and funding for mental health.

It does not include a ban on assault weapons.

The parents NBC News spoke to felt that the Senate proposal could go further, including a ban on assault weapons.

Simpo said she believes the bipartisan framework made public thus far is intended to pacify people to avoid protests and riots. Raising the age to buy assault weapons would mean little, she said, because it would still allow people to “have weapons of war in their hands.”

Kpaduwa, the Maryland mom, said she would favor an assault weapons ban, a federal red flag law and raising the purchasing age from 18 to 21.

“There’s a lot of different things that lead to this point,” he said. “I think banning assault rifles is a very important step.”