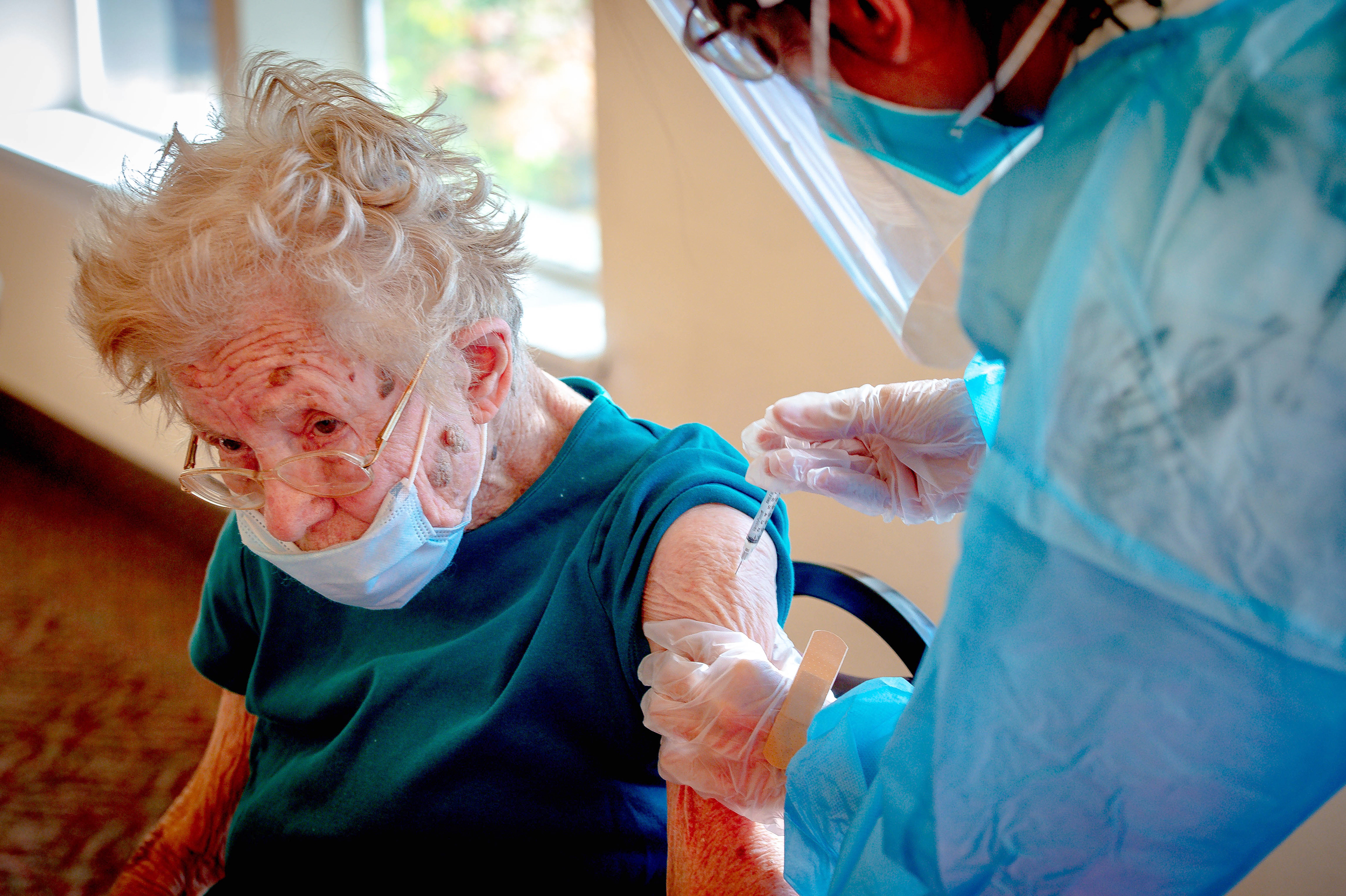 Advisers to the Centers for Disease Control and Prevention voted Thursday to recommend that certain at-risk groups of people should receive a third dose of the Pfizer-BioNTech vaccine for added protection against Covid-19.

All people ages 65 and up and those in long-term care facilities who were initially vaccinated with the Pfizer vaccine should receive a booster dose. People ages 50 to 64 with underlying medical conditions should also get a booster dose. The additional shots would be administered at least six months after people complete their initial vaccination series.

The advisers stopped short of a full endorsement for other groups of at-risk individuals, instead recommending that they may choose to get the booster shot if they feel they need it, in consultation with their physician. Those individuals include people ages 18 to 49 with underlying health conditions. The committee voted against recommending a booster for people ages 18 to 64 who have a high risk of being exposed to the virus at work, including health care workers and teachers.

The Advisory Committee on Immunization Practices’ recommendations partially mirrored the Food and Drug Administration’s emergency use authorization granted for the third Pfizer dose Wednesday. The committee’s votes will now go to CDC Director Dr. Rochelle Walensky for final signoff. If Walensky endorses the committee’s recommendations, shots can begin being administered immediately. The recommendations will apply only to people who have received the two-dose Pfizer vaccines.

At least 27 million people who are 65 or older will be eligible for a booster dose.

Committee members and the CDC stressed that these are interim recommendations that will be updated as more data come in.

The committee members expressed significant concern about a booster shot for younger people due to lack of evidence about safety and waning protection against severe disease.

The votes come after several weeks of confusing messaging about a vaccine booster, which was set off when the Biden administration announced in August that it was planning to begin giving an extra shot to all Americans eight months after they had been fully vaccinated, starting the week of Sept. 20.

However, an advisory group to the FDA rejected that broad recommendation last week, narrowing the group of people eligible to those 65 and older and those at high risk of severe illness. The timing of the booster shot also changed, from eight months after the second dose to six months.

Who gets a booster?

Evidence was strongest for a booster dose in people ages 65 and older, the CDC’s Dr. Sara Oliver said. Vaccine effectiveness against infection and severe disease has waned in this group.

The committee also supported a booster dose for people 18 and older in long-term care facilities, as well as people ages 50 to 64 with underlying medical conditions. Younger people, ages 18 to 49, with underlying conditions may choose to get a booster. Those conditions will likely be similar to the ones listed in the initial vaccine rollout, such as cancer, diabetes, pregnancy, obesity and heart conditions.

However, there is less evidence of waning immunity for people with underlying medical conditions, Oliver said.

Committee members struck a skeptical tone about the booster shot during public discussions Wednesday and Thursday, stressing that the biggest issue remains vaccinating the unvaccinated.

In a presentation Wednesday, Oliver summarized what’s known about the Pfizer booster shot. She noted that the safety of the extra shot, and the effect it appears to have on enhancing protection against the virus, are “reassuring,” but added that a number of questions remain.

One question that was revisited several times: What is the goal of a booster shot? Is it to prevent all infections, or is it to prevent hospitalizations and death?

Preventing all infections — which would occur if the vaccines induced what’s known as sterilizing immunity — is not feasible, said committee member Dr. Sarah Long, a professor of pediatrics at Drexel University College of Medicine in Philadelphia.

Dr. Kiepp Talbot, an associate professor of medicine at Vanderbilt University in Nashville, Tennessee, agreed. “One of the things that we need to begin to understand is that we will likely prevent hospitalizations and deaths, and hopefully symptomatic lower respiratory tract infections, but it is unlikely that we will prevent everything,” she said.

It’s also unclear what level of antibodies are needed to maintain protection. Although there has been much focus on waning antibody levels in people who received the Pfizer vaccine, Long noted that the “key question” is not whether the levels wane, but “what is the minimum you have to have to have protection?”

That remains unknown. Pfizer scientist Dr. Bill Gruber, who presented  Wednesday, said that the company has yet to identify so-called correlates of protection — cutoff levels of surrogate measurements like antibodies or T-cells that would indicate when someone needs a booster.

“It’s going to be very challenging” to define these cutoffs,  he said. “It’s clear that protection is multifactorial,” meaning that antibody levels are not the only aspect of it.

On safety, committee members noted, only a small number of people — 306 — were included in the U.S. analysis, none of whom were under 18 years old. “Based on those numbers, we would be unable to determine the risk of rare side effects such as myocarditis after a booster dose,” Oliver said, referring to a type of heart inflammation.

Additional safety data from Israel, where more than 2.8 million people have been given a third dose, was also presented Wednesday. There, only one case of myocarditis has been reported to date. But younger people there — for whom the risk is higher — have just started getting their third shot, so it may not reflect the full scope of cases.

Megan Wallace, a CDC epidemiologist, said in a presentation Thursday that the risk of myocarditis after a third shot is unknown, though the risk is likely greater for younger people, particularly men.

The benefit of a booster is expected to be greatest for adults ages 65 and up, though the third shot is estimated to also help prevent hospitalization and infection in younger people, Wallace said.

Another top concern for committee members was the FDA authorization only applies to the Pfizer vaccine, and those who were initially vaccinated with it.

That leaves out, for the moment, vast swaths of fully vaccinated people in the U.S. who received the Moderna or the Johnson & Johnson vaccines initially.

Moderna has submitted its application to the FDA for its booster dose and could receive authorization within weeks. Johnson & Johnson has provided data to the agency on booster dose effectiveness and safety, but declined to say when it would formally apply for emergency use authorization.

“That’s going to leave half of people immunized being told that they’re at risk now of waning immunity and hospitalization and unable to get a booster dose. That’s a big public health panic,” Long said.