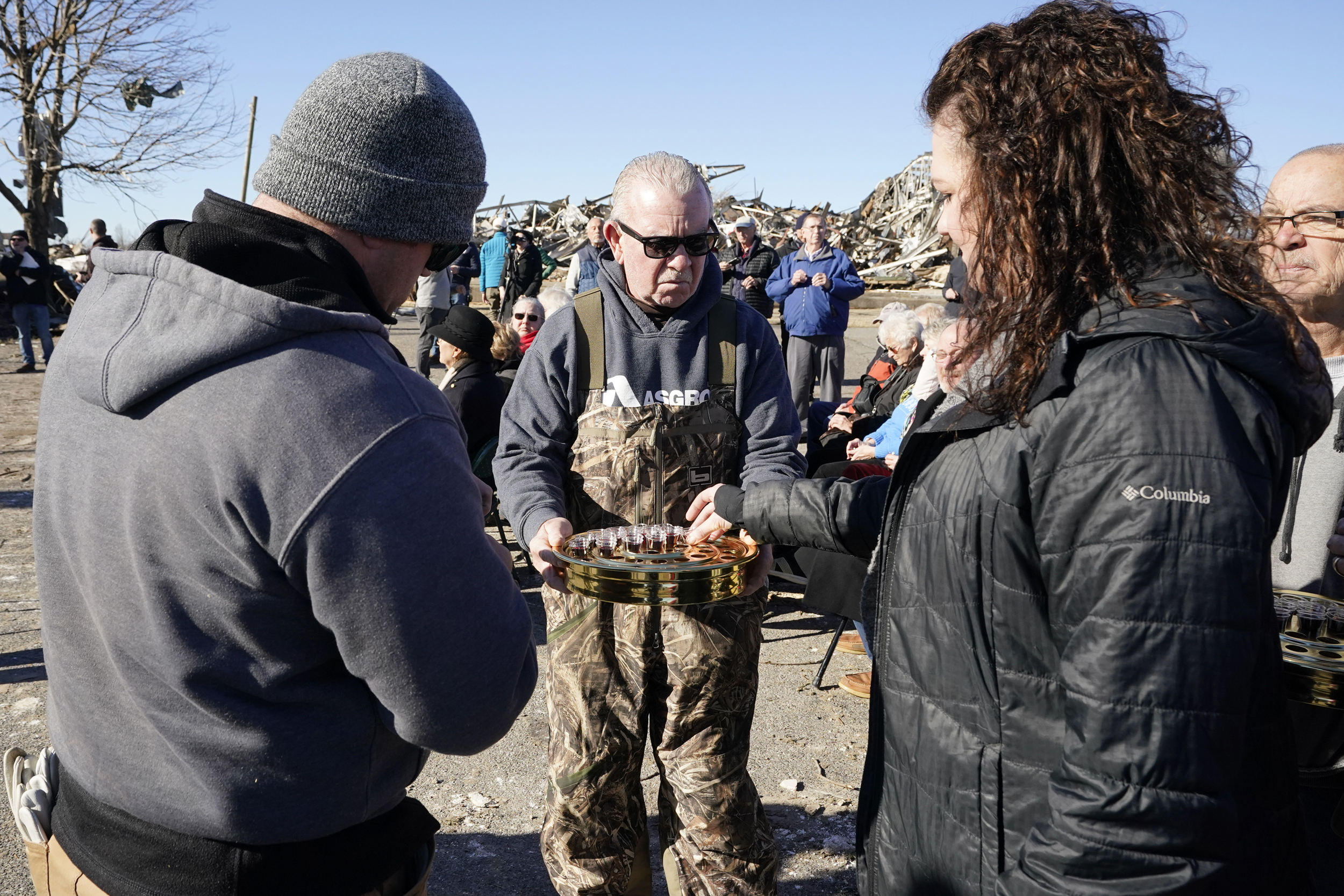 The pews were replaced by folding chairs.

The lights were powered by generators and the glow of cellphones.

Although their churches were mostly destroyed by a tornado this month that decimated their city, and rubble remained strewn around them, dozens of worshippers from two churches in Mayfield, Kentucky, gathered Friday during a Christmas Eve service.

The congregants said goodbye to their churches and vowed to rebuild.

“We were saying farewell to these buildings. Our ministries will live in other locations,” Pastor Milton West, senior minister at the First Christian Church, told NBC News on Saturday. “We believe that the church is not the building, the church is the people that worship there.”

About 150 congregants from the church, and the First Presbyterian Church, gathered at First Christian’s parking lot during a 45-minute Christmas Eve service, West said.

“We had a service of closure. After the communion, we thanked God for the memory of every pastor, every deacon and elder that had served. For every Sunday school teacher, every nursery worker. … We gave thanks to them, with a promise that we will go forward and continue to serve.”

First Christian documented the service on its Facebook page. Photos showed the church’s heavily damaged roof. Bricks and debris scattered on a staircase leading to its entrance. West said the service was emotional and many congregants held hands throughout its entirety. Other photos showed two congregants hugging, one of whom was shedding tears.

The city of Mayfield was one of the hardest hit locations in Kentucky. Tornadoes tore through the region late on Dec. 10 and early the following day.

The police station, city hall and courthouse were all badly damaged.

About 110 people were inside the Mayfield Consumer Products factory when a tornado hit. At least eight workers died, Kentucky officials have said. The company has come under heavy scrutiny after multiple workers told NBC News that as the twister was bearing down on the city, their supervisors warned they could be fired if they tried to flee.

As of last week, the total of storm-related casualties in five states was 90, including 76 in Kentucky.

The White House has approved Kentucky’s state of emergency and ordered federal assistance to supplement state and local response efforts due to the emergency conditions resulting from severe storms, straight-line winds, flooding and tornadoes.

Ben Garrott, who was baptized at the Presbyterian church where his parents wed in 1946, and his wife, Joyce, hadn’t been to church much in the past two years because of the coronavirus pandemic.

But they both felt they needed to be there Friday, he told The Courier-Journal newspaper in Louisville.

“You look at it and see all these memories just come back: church camps, youth group meetings, special services,” Garrott said. “Just, everything.”

Although most of First Christian Church was damaged beyond repair, West on Saturday chose to highlight what the faithful see as Divine Intervention: The church’s communion table, which he believed dated back to 1906 when the church opened, went relatively unscathed.

The table, West said, is made of wood, has a glass encasing and a carving of The Last Supper. A cross that sat atop, West said, also wasn’t damaged.

“It’s the most important relic our church has. It’s what we gather around every Sunday to celebrate communion,” West said. “We think that’s miraculous. We really do.”

Beth Scarbrough, a fourth-generation member of First Christian, named in rapid succession the family milestones celebrated at the church: her wedding, the weddings of her grandparents, parents and sister, and the baptisms of all her children.

Despite the heartbreak, Scarbrough told the Courier-Journal that congregants are propping each other up and remain strong.

“What we valued most — our communion table and a piece of stained glass that says ‘First Christian Church’ — survived,” she said. “We can build again. And that’s what we’re going to do. We’re a family. We stick together. And we’re helping each other along.”

Worshippers and residents alike are coming to grips with the reality their city is forever changed, West said. However, he said, the devastation the community has seen offers residents a chance to ignore their religious, political and social differences.

“We can remain in despair, or we can choose to stand up, reach out … and fight back,” West said. “This is an opportunity to put those differences aside, and come together for the common good … let’s restore and reclaim, and renew and rebuild our town of Mayfield, Kentucky. That’s what it’s all about.”