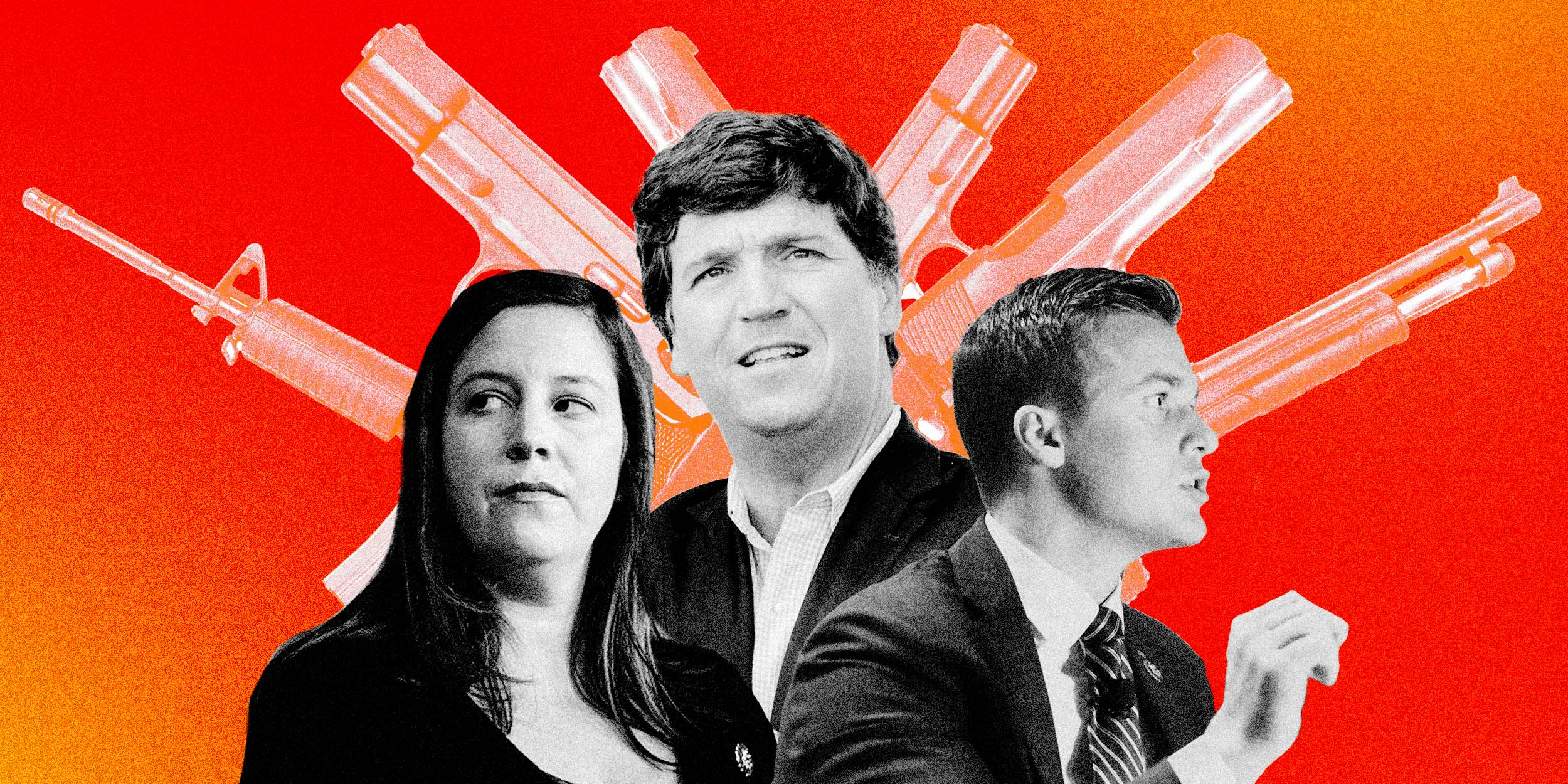 There’s no mystery as to what enabled Tuesday’s mass shooting at an elementary school in Uvalde, Texas.

America’s violent and obsessive gun culture seems to radiate primarily from white, conservative paranoia about ethnic replacement. Today, those fears have been ratcheted up, the product of a yearslong propaganda campaign by Republican politicians and media provocateurs who have suggested people need unfettered access to all kinds of guns in order to stave off threats from an oppressive government.

Texas Republicans are trying to make their state the epicenter of the white, Christian theocracy conservatives want to establish nationwide. And part of that, if you let them tell it, means allowing people to easily acquire guns.

Those threats are frequently embodied by nonwhite people gaining rights or status. Many conservatives are claiming that so-called threat — and thus, the fight for their livelihood — is here now.

This, I believe, at least partially explains the rapid increase in gun sales over the past few years.

Don’t believe me? Let’s take a look back.

According to polling from earlier this year, a majority of Republicans think the deadly Jan. 6, 2021 riot at the U.S. Capitol, an effort to keep then-President Donald Trump in office despite losing the election to Joe Biden, was meant to “protect democracy.” Participants purportedly sought to fight against “fraudulent” (read: Black) voters who conservatives claimed were stealing the election — and the country — from them.

And other people central to conservative politics have floated or endorsed violent ideas, as well. That includes figures like gun-toting Rep. Madison Cawthorn of North Carolina, who warned about “bloodshed” if future elections play out as 2020 did. It also includes Ginni Thomas, Supreme Court Justice Clarence Thomas’ wife, who reportedly texted then-Trump White House chief of staff Mark Meadows to promote a conspiracy theory that falsely claimed Biden’s “crime family” was going to be imprisoned in Guantanamo Bay.

But the violent, wartime rhetoric doesn’t stop there in the GOP.

Republicans frequently denounce immigration as an “invasion” of people coming to take over the country and alter the American way of life. Right-wing figures like Fox News host Tucker Carlson seem to work in tandem with Republican lawmakers like Rep. Elise Stefanik of New York to push the racist “replacement” theory that claims immigrants are part of a Democratic plot.

In an ad campaign last year, Stefanik said Democrats seeking citizenship for undocumented immigrants who have been living in the country for years is “their most aggressive move yet: a PERMANENT ELECTION INSURRECTION.”

The GOP’s response to this is literally a militaristic one: Conservative figures have suggested authorizing wartime powers to fend off incoming migrants, as though they’re part of an invading army.

And we have an idea of where this type of language leads. Less than two weeks ago, a shooter opened fire at a grocery store in a predominantly Black neighborhood in Buffalo, New York, killing 10 people. The suspect allegedly invoked the “replacement” theory as his reason doing so.

Republicans have even framed the Affordable Care Act, which made health care more accessible to many nonwhite people, as an authoritarian takeover. The racist opposition to so-called Obamacare is well-documented, as is the history of violence meant to intimidate its backers. Nonetheless, there are still GOP lawmakers seeking to repeal it on the premise that accessible health care amounts to a socialist takeover.

Within all three of these areas, you’ll find conservatives cheering on violence, or threatening to commit violence, essentially in the name of upholding white, Christian, conservative rule.

So, how were 19 children and two teachers gunned down in Uvalde on Tuesday? It’s because Texas Republicans are trying to make their state the epicenter of the white, Christian theocracy conservatives want to establish nationwide. And part of that, if you let them tell it, means allowing people to easily acquire guns.

That’s why Texas Gov. Greg Abbott signed a law last year that made it easier for Tuesday’s shooter to acquire his weapon. And that’s why the Supreme Court, despite the massacre in Buffalo last week, appears poised to issue a ruling making it easier to carry concealed guns in New York.

Because Republicans see guns as vital tools in their right-wing vision. And they won’t let anyone — not dead children in Texas, or dead shoppers in Buffalo — rid them of that belief.