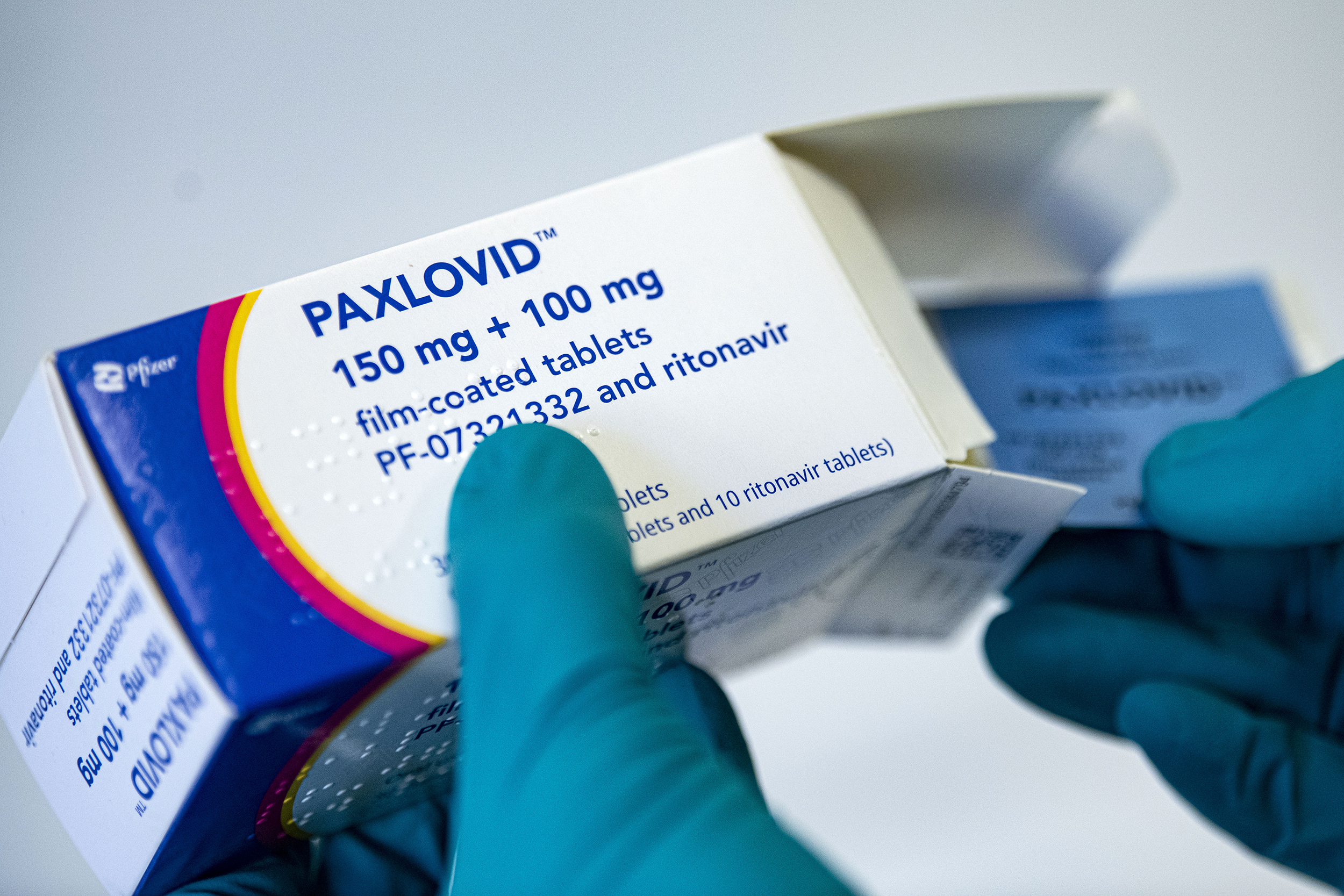 Pfizer’s antiviral pills are highly effective at keeping people with Covid out of the hospital, but there are growing reports that, in rare cases, patients treated for the coronavirus with Paxlovid can experience a second round of the disease shortly after recovering.

Infectious disease experts stress that cases of apparent viral rebound, when someone gets better and then soon gets sick again, following Covid treatment are not cause for alarm. However, there are increasing calls for federal agencies to provide greater clarity and guidance about how patients and health care providers should respond.

With mostly just anecdotal reports coming out, questions remain as to whether people whose Covid symptoms return shortly after they take Paxlovid are contagious and should keep isolating to avoid passing the virus to others.

For those who do experience a second round of symptoms, the sudden shift can also leave them anxious about whether they should seek further treatment.

Michael Henry, 31, a vaccinated and boosted software engineer in Philadelphia, first got sick with Covid on April 4, suffering from chills and a fever.

Henry, who has medical conditions that raise his risk of severe disease, got a Paxlovid prescription from an urgent care center the next day. Within 48 hours, he was feeling “totally fine.” But then, one week after his last dose, he got sick once again, with milder cold-like symptoms, and remained sick for about five days.

“I was kind of shocked,” Henry said of testing positive once more.

“There’s no guidance on what to do. Should I be isolating?” he recalled. “How do I keep my family safe?”

Full coverage of the coronavirus pandemic

He called his doctor, Philadelphia’s Covid information line and a health insurance nurse looking for clarity. “Everyone I talked to gave me different answers.”

Paxlovid has been prescribed since December, when the Food and Drug Administration granted emergency authorization for people at high risk of severe Covid. The five-day course of prescription pills reduced the risk of hospitalization or death by 88 percent in a clinical trial. The federal government, which fully covers the treatment, has shipped to the states over 1.7 million courses since Paxlovid was green-lit. On Monday, the White House said it will double the number of locations where Paxlovid is available, since many of the doses have gone unused.

“There’s still so much we don’t know about Covid-19 and the best way to treat it,” said Dr. H. Clifford Lane, deputy director for clinical research and special projects at the National Institute for Allergy and Infectious Diseases. “These anecdotes give us reason to re-examine duration of therapy, approaches to therapy, other laboratory tests we might use to predict who could benefit from longer courses of treatment.”

On Tuesday, Dr. Michael Charness, chief of staff at the VA Boston Healthcare System, posted a pre-print detailing the case of a fully vaccinated and boosted 71-year-old man who recently saw his virus rebound after he took Paxlovid. The case study is under review by a medical journal.

Charness’ patient, who has intermittent asthma, started Paxlovid the day his Covid symptoms began. Two days later, he began a symptom-free week — only to get sick once again for about four days.

Genetic sequences of his virus indicated it did not develop resistance to the two medications in Paxlovid, nor was he re-infected. Tests for other respiratory viruses revealed that the coronavirus was the sole pathogen ailing him.

No evidence has yet emerged that anyone experiencing post-Paxlovid viral rebound had virus that had developed resistance to the treatment, Pfizer and other experts report. Nevertheless, the possibility is a concern.

“If someone has a case of post-Paxlovid SARS-CoV-2 relapse versus reinfection, it’s important that this be flagged to public health authorities,” said infectious disease specialist Dr. Céline Gounder, an editor at large for public health at Kaiser Health News. “The virus should be sequenced so we can learn if it’s mutated and developed resistance to Paxlovid.”

Pfizer spokesperson Kit Longley said the company is continuing “to monitor data from our ongoing clinical studies of Paxlovid, as well as real-world evidence” related to cases of post-Paxlovid relapse.

People who experience such a rebound, Longley said, can relay their experience to Pfizer’s portal for reporting Paxlovid-related adverse events.

Scientific documentation about post-Paxlovid relapse has actually been available since last fall. Pfizer’s application to the FDA for emergency use authorization of Paxlovid stated that in the placebo-controlled clinical trial — which included 2,246 participants — “several subjects appeared to have a rebound in SARS-CoV-2 RNA levels around Day 10 or Day 14” after beginning treatment.

In a statement, Pfizer spokesperson Longley said that in Paxlovid’s clinical trial, the rare cases of the coronavirus rebounding soon after participants completed treatment occurred at a similar rate among those who received a placebo.

“We did not see an association between the observed viral load increase and subsequent severe disease,” Longley said. “Although it is too early to determine the cause, this suggests the observed increase in viral load is unlikely to be related to Paxlovid.”

However, in an April 25 blog post in NEJM Journal Watch, Dr. Paul Sax, an infectious disease specialist at Harvard Medical School, called upon Pfizer to release more data on these rebound cases, including information on how the participants’ health fared.

Charness speculated that when people start Paxlovid during the first day or two following Covid-19 symptoms, the early suppression of the coronavirus might compromise the immune system’s response to the infection.

Dr. Timothy Brewer, a professor of medicine and epidemiology at the University of California, Los Angeles further theorized that the body may sometimes harbor coronavirus in locations that Paxlovid has a hard time accessing, such as beyond the blood-brain barrier. After stopping the drug, the small stores of virus could eventually cause a rebound.

Some people, Brewer also suggested, might not absorb Paxlovid as effectively as others, leaving them with an insufficient amount of drug to wipe out the virus. A longer course of treatment might be needed, he suggested.

Because Paxlovid is not yet fully approved by FDA, doctors are not permitted to use their discretion to prescribe it for longer periods.

Some health care providers do, however, believe the emergency use authorization permits them to prescribe a second Paxlovid course to people experiencing relapse.

“I really don’t think that five days of Paxlovid is going to be enough for certain subgroups of immunocompromised people,” he said.

“Should recurrent cases isolate again? Does the EUA allow for repeat treatment and how does the NIH treatment guidelines committee consider use in those at high risk for recurrence like those immune compromised?,” Klausner asked.

FDA spokesperson Chanapa Tantibanchachai said that the agency “is evaluating the reports of viral load rebound after completing Paxlovid treatment and will share recommendations if appropriate.”

CDC spokesperson Scott Pauley declined to comment on calls for the agency to clarify isolation guidelines for rebound cases.

Health care providers stress that Paxlovid hasn’t necessarily failed people whose Covid-19 symptoms return following treatment; it still may have saved them from hospitalization and death.

Dr. Leonard Joffe, 79, a retired ophthalmologist and pancreatic cancer survivor living with his wife in Tucson, Arizona, said that his recent experience with a second Covid-19 spell directly on the heels of Paxlovid treatment wasn’t so terrible.

“It was more of a nuisance than anything, because I had to wear a mask in my own home,” Joffe said. “My wife and I sat on opposite ends of the table, like Putin and other people.”