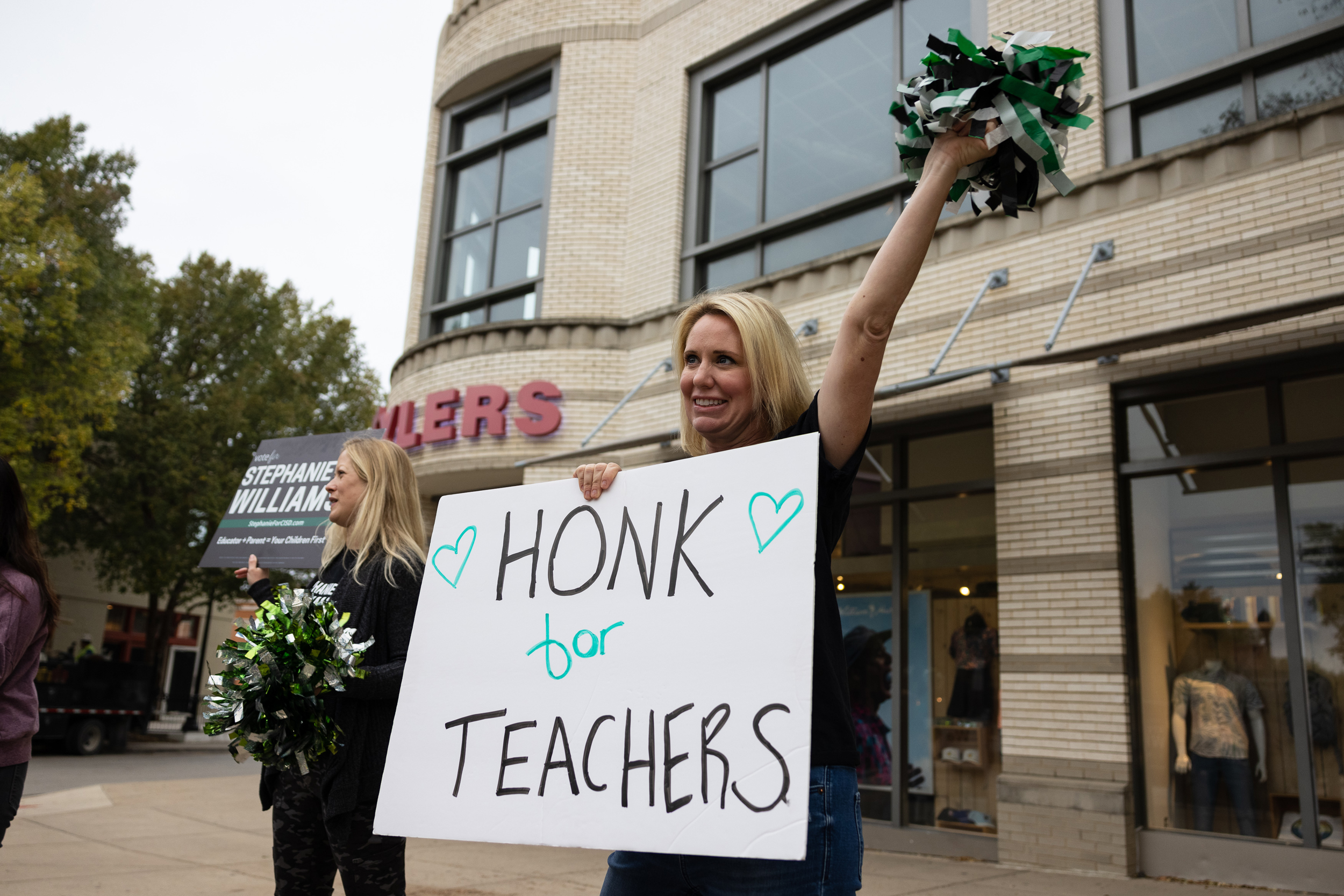 In Southlake, Texas, where parents have been feuding for more than a year over a school district’s proposal to address racism, candidates supported by a conservative political action committee won majority control of the school board Tuesday, clearing the way for the board to officially kill the polarizing diversity plan.

A special election to replace a board member of the Carroll Independent School District who resigned this summer definitively shifted the balance of power to opponents of the proposed Cultural Competence Action Plan. Voters in the affluent suburb northwest of Dallas delivered a landslide victory Tuesday to Andrew Yeager, who campaigned against the district’s plan for new diversity training programs and changes to the curriculum.

Yeager, a regional ad sales executive for NBCUniversal-owned TV stations, won about 66 percent of the more than 7,300 ballots cast during early voting. His opponent, Stephanie Williams, a former teacher who supported the diversity plan, received 34 percent — a gap too large to be closed with votes cast on Election Day. (NBC News is part of NBCUniversal.)

Yeager didn’t respond to a message requesting an interview.

The victory caps a yearlong campaign by Southlake Families PAC, a group formed by local Republican Party leaders in response to the district’s diversity efforts. The PAC, which describes itself as “unapologetically rooted in Judeo-Christian values,” raised $250,000 and poured much of it into local elections.

In May, two other candidates backed by Southlake Families PAC won seats on the Carroll school board in a bitter election that foreshadowed the nationwide fight over how to address issues of race, gender and sexuality in schools.

In the months since, conservative parents and activists have worked to replicate Southlake Families PAC’s success in nonpartisan school board races across the country — from Douglas County, Colorado, to Guilford, Connecticut. New groups have emerged nationwide backing candidates opposed to history lessons, library books and school programs centered on racism, LGBTQ rights and other issues that conservatives have misbranded under the umbrella of “critical race theory,” an academic study of how racism is embedded in modern institutions.

The election Tuesday made Southlake one of the first places in the country where candidates running on an anti-critical race theory platform have flipped control of a school board. After Yeager is sworn in, trustees aligned with Southlake Families PAC will hold a 4-3 majority on the Carroll school board, giving the group power to shape the district’s policies.

PAC members also have spoken out against mental health services in schools and fought to get books about racism and LGBTQ issues removed from Carroll classrooms and school libraries.

Last month, the district drew national attention after an administrator was recorded advising teachers that if they have a book about the Holocaust in the classroom, they should also offer students access to a book from an “opposing” perspective. The district’s superintendent later apologized and walked back those instructions.

Southlake Families PAC leaders did not respond to messages requesting an interview.

Williams, a mother of four, including two current Carroll students, said she was heartbroken and disappointed by the outcome.

“This was about protecting students,” Willams said. “And it was about making sure our school system was inclusive and safe, and provided all students the opportunity to be their best. And I’m concerned about not only not addressing the needs of those kids, but perhaps even going backward.”

The fight in Southlake dates back three years, long before opposing critical race theory became a talking point among Republican politicians. In October 2018, a video of white Carroll high school students chanting the N-word went viral. In the aftermath, school leaders hosted listening sessions with students and parents and appointed a committee of 63 community volunteers to come up with a plan to make Carroll more welcoming for students from diverse backgrounds.

The result of the school diversity committee’s work, a 34-page document called the Cultural Competence Action Plan, was released in August 2020. It called for mandatory cultural sensitivity training for all students and teachers, a formal process to report and track incidents of racist bullying and changes to the code of conduct to hold students accountable for acts of discrimination.

In the midst of the pandemic, a heated presidential election and a broader national reckoning over racism following the May 2020 murder of George Floyd by a white police officer in Minneapolis, the plan was met with swift and fierce opposition.

For months, conservative parents packed school board meetings, decrying aspects of the proposal that they said would have created “diversity police” and amounted to “reverse racism” against white children. Opponents took particular issue with a district proposal to track incidents of microaggressions — subtle, indirect and sometimes unintentional incidents of discrimination.

The plan has been on hold since December, after a parent’s lawsuit, filed with financial support from Southlake Families PAC, led a judge to issue a temporary restraining order blocking the district from taking any action on the proposal. Many Southlake residents viewed Tuesday’s election as the final decision on whether the school board would ever revisit the diversity plan.

Throughout the campaign, Yeager, a father of three, warned that the proposal — and a list of additional demands published by a student activist group — would ruin Carroll’s “tradition of excellence.” The majority-white but quickly diversifying school system is one of the top performing districts in Texas.

“If these demands were implemented, this would no longer be an excellent school district,” Yeager said at a candidate forum last month. “This would be a school district that would be placing equity over excellence.”

Yeager and board members supported by Southlake Families PAC have argued that the only change needed to crack down on discriminatory bullying at Carroll is an improved process for reporting and investigating student harassment complaints — something the district began working on this summer.

Angela Jones, a Black Southlake resident and mother of four, said “just doling out punishment” won’t be enough. Having served on the district diversity committee, Jones said she believes all students would benefit from new educational programs to help students understand why it’s wrong to pick on classmates based on their race, religion or sexual orientation.

Jones said she was disappointed by the election results, but she’s not giving up.

“Unfortunately, it’s going to take outside forces to make change,” Jones said. “Southlake had opportunities to do it on its own, but the community decided not to do that.”