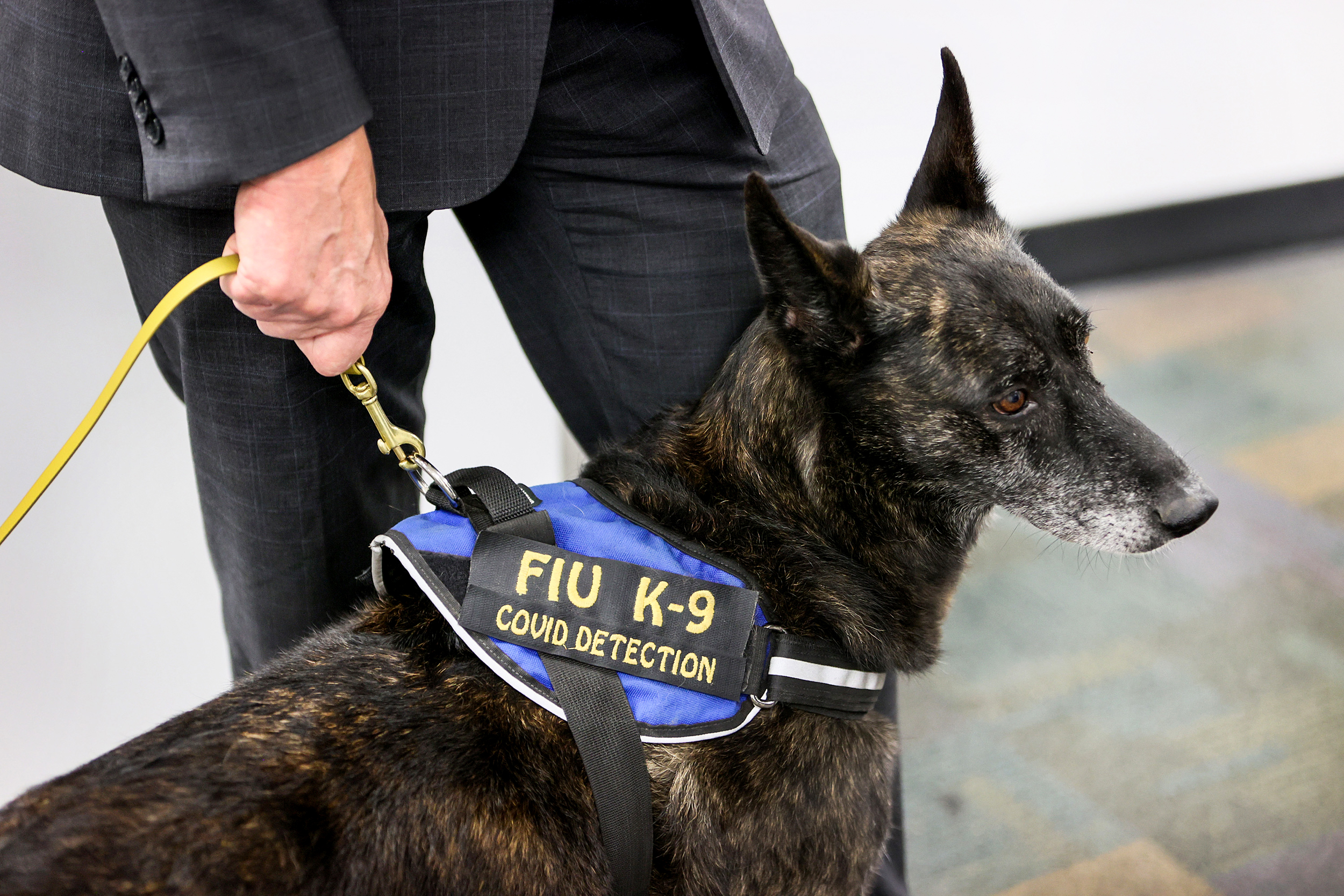 Questions about whether dogs can sniff out Covid — and how well — have intrigued researchers since early in the pandemic.

A study published Wednesday in the journal Plos One offers further evidence that dogs can indeed be trained to detect Covid. The dogs tested in the research accurately identified 97 percent of positive cases after sniffing human sweat samples. That made them more sensitive than some rapid antigen tests.

The samples were collected at community centers in Paris from a mix of symptomatic and asymptomatic cases, as well as healthy people without Covid. The researchers found the dogs to be especially good at detecting asymptomatic infections, with a sensitivity nearing 100 percent.

Previous studies have also highlighted this canine skill: Researchers in Florida last year found that that dogs could predict positive Covid tests with 73 to 93 percent accuracy after a month of training. In a U.K. study, dogs accurately pinpointed 82 to 94 percent of positive cases.

The new study was conducted in early 2021, so the dogs were identifying the original coronavirus. Dominique Grandjean, one of the study’s authors and a professor at the Alfort National Veterinary School in France, said he’s now examining how well dogs pick up on variants.

Grandjean said his findings suggest that dogs might be useful for detecting Covid in airports, nursing homes, schools, or sporting events. Already, dogs have helped sniff out Covid at airports in Saudi Arabia, Finland and the United Arab Emirates.

Dogs “only need a few molecules” to identify a positive case, Grandjean said.

But Dr. Cynthia Otto, director of the Penn Vet Working Dog Center at the University of Pennsylvania, said it’s difficult to train dogs to detect Covid in the real world.

“The ideal — and I would consider it the Holy Grail — is that the dog is just standing there, a person walks by, and they say, ‘Yes, no, yes, no, yes, no,'” Otto said. “That eventually could be done, but making sure it’s done with all the proper controls and quality assurances and safety — it’s a big step. I haven’t seen anyone who has proposed how to make that transition in a way that’s scientific and safe.”

For the new study, researchers trained five dogs by rewarding them with toys for detecting a positive Covid sample.

The dogs then sniffed 335 sweat samples, 109 of which were positive on PCR lab tests. Each sample was placed in a tiny box behind a cone, with the cones lined up in rows of 10. If a dog thought it detected a positive case, it would sit down.

Grandjean estimated that it took just 15 seconds for the dogs to analyze 20 Covid samples. When it came to categorizing negative samples — known as specificity in testing — the dogs were slightly less accurate. They identified 91 percent of the Covid-free samples correctly, meaning they gave some false positives.

Both Grandjean and Otto also said that dogs have demonstrated an ability to detect infections earlier in the course of a person’s illness than PCR tests. In many cases, Grandjean hypothesized, someone who tests negative on a PCR but positive according to a dog’s assessment will likely test positive on a PCR two days later.

Otto said dogs might therefore be a useful prescreening tool to flag potential cases that could later be confirmed in a lab.

‘Don’t try this at home’

Before the pandemic, Grandjean was studying whether dogs could sniff out colon cancer. In 2020, he switched his focus to Covid. His research involves labradors, German shepherds and Belgian shepherds, and he previously found that dogs can detect Covid from sniffing a person’s mask.

Part of the reason dogs can do that, Grandjean said, is that they have an organ in their noses called the Jacobson’s organ, which helps them identify smells that seem odorless to humans. That’s how dogs can pick up on coronavirus proteins.

Grandjean said any breed could detect Covid if it enjoys playing and doesn’t have a shortened snout. Other animals, like cats, have similarly strong senses of smell, he added, but dogs are easier to train.

However, the training process is highly technical, Otto said. Outside odors can interfere, and it’s not always easy to tell if dogs are searching for the right scent. Dogs are taught using positive reinforcement; similar strategies are used to train them to find termites or sniff out drugs. But of course, not all dogs like the same rewards, Otto said.

“For some dogs, a ball might be the absolute best thing in the world, where another dog might think that a tug toy or a squeaky rabbit is the best thing,” she said. Other dogs, meanwhile, just “get really bored with it.”

What’s more, Otto added, a dog’s ability to detect Covid in a sweat sample or piece of clothing doesn’t necessarily mean it will be able to do so when facing a real person.

“That’s one of the big challenges — to have the dog learn to translate from a sample to an entire human being, which is a much more complex odor,” she said.

For anyone hoping to train their own pet to sniff out Covid, Otto had some advice: “Don’t try this at home.”