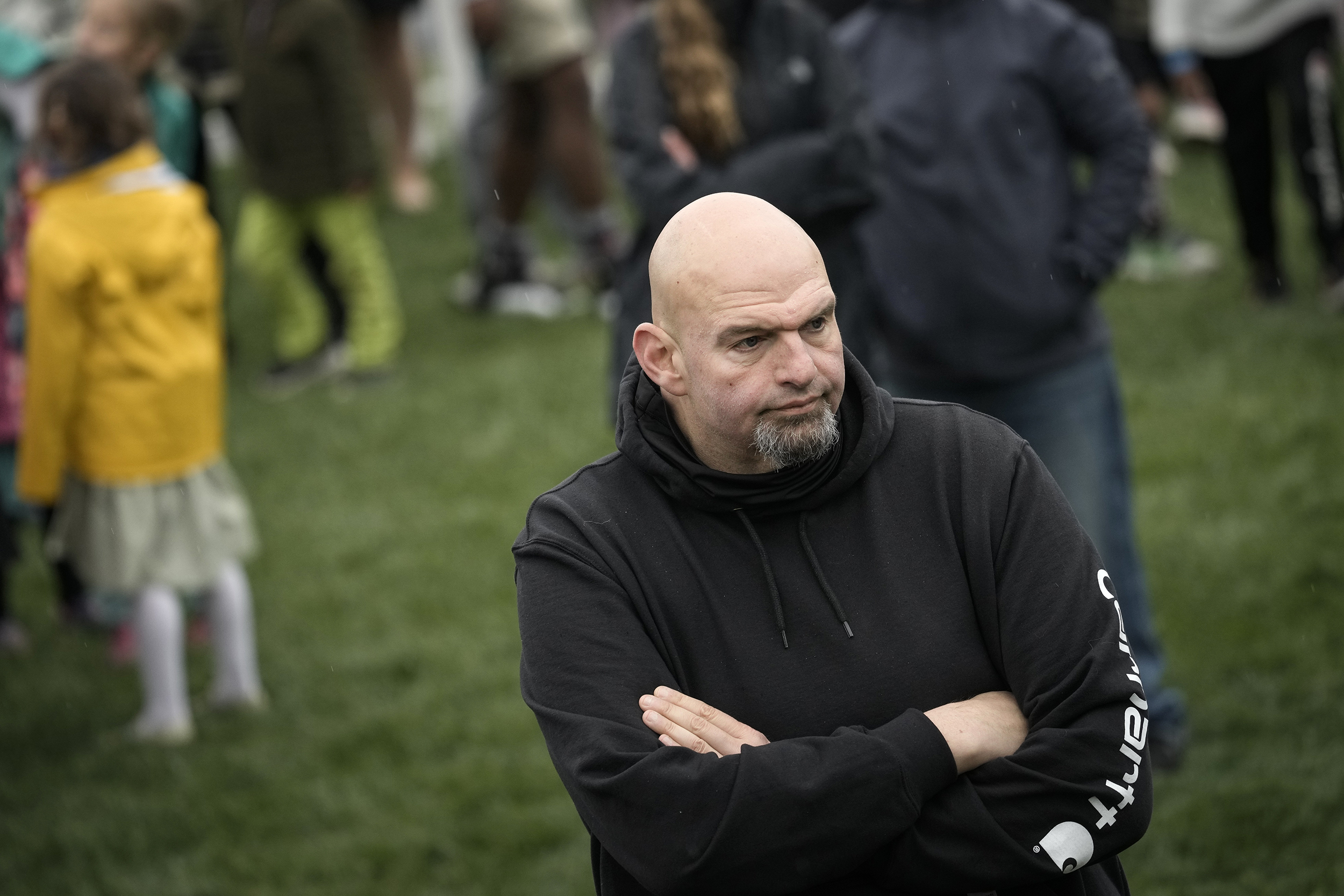 John Fetterman heard what sounded like gunfire and saw a man running away. So he reacted by getting his kid inside to safety before he called 911.

What Fetterman did next, however, still haunts him nine years later as he campaigns for the Democratic nomination for the Senate in Pennsylvania: He chased the man down with a shotgun and detained him until police arrived.

Turns out, the man was jogging and wearing running clothes. According to a police report, the man was unarmed and said the sound of gunfire was actually fireworks, although two witnesses thought they heard shots.

The man Fetterman pulled a gun on is Black. Fetterman — the mayor of the Pittsburgh-area borough of Braddock at the time and now the state’s lieutenant governor — is white. Fetterman, 52, said he couldn’t tell the jogger’s race initially because of how he was bundled up in the winter cold.

Across the state, Democrats who understand Black voters and are neutral in the May 17 primary fault Fetterman’s actions and explanations thus far, and they worry that attacks on him over the incident could depress African American turnout in November in its two biggest urban areas, Philadelphia and Pittsburgh — a must for Democrats to carry the commonwealth.

The incident took center stage in the race Thursday when Fetterman’s two Democratic opponents — U.S. Rep. Conor Lamb and state Rep. Malcolm Kenyatta — faced him for the first time at the first statewide televised debate and excoriated him over his actions in 2013 and for his refusal to say whether he erred or whether he would do anything differently today.

“I attacked the gun violence problem in Braddock, and we succeeded,” Fetterman said Thursday on stage, emphasizing that there were no gun deaths in the crime-racked borough for more than five of his 13 years as mayor.

Fetterman went on to explain that he made the “split-second decision” to “intercept” the man “until our first responders arrived as Braddock’s chief law enforcement officer and as the mayor.”

Fetterman’s suggestion that he was acting under color of law are a new talking point that stands in contrast to his initial comments about the 2013 incident.

“He’s not shooting straight on this, no pun intended. Just fess up. Apologize,” said Michael Nutter, Philadelphia’s last Black mayor, who served until 2016.

“All this other stuff — that he was the chief law enforcement officer or that he didn’t know the guy was Black — just doesn’t really sound like he wants to tell the truth,” added Nutter, who is neutral in the Senate primary. “It’s not helping him. Figuratively speaking, he’s shooting himself in the foot, and he doesn’t have to.”

It’s an issue of national importance, Nutter and others argue, because Pennsylvania is a swing state with an open Senate seat that could decide control of the evenly divided upper chamber of Congress in November.

The Rev. Mark Kelly Tyler, a top Democratic organizer in Philadelphia who helped turn out Black voters in big numbers to help President Joe Biden win the state in 2020, said he was concerned that Fetterman’s failure to adequately address the gun incident was reminiscent of former Secretary of State Hillary Clinton’s failed presidential campaign in 2016, when Republicans saturated Black voters with messages about her comment in the 1990s about “superpredators.”

“If you think Black voters didn’t turn out for Hillary Clinton because she called people superpredators but you think that a white guy pulling a shotgun on a Black guy won’t have an effect — in the context of the post-George Floyd, Ahmaud Arbery, Breonna Taylor — then you’re living in fantasy land,” said Tyler, who is also neutral in the primary.

About 11 percent of the state’s voters are Black. And while Black voters overwhelmingly support Democratic candidates, turnout needs to be strong to ensure a Democratic win, Tyler said.

“This story can become a drumbeat almost every day or just result in one good ad that can depress Philadelphia’s turnout by 40, 50,000 votes,” Tyler said. “That would be enough to lose the election for us.”

Biden’s margin of victory in the state was about 80,000 votes in November 2020. In contrast, Clinton lost by about 44,000 votes in 2016. And she had apologized for her “superpredator” remark — a sign that contrition might not be enough anyway.

After his encounter with the Black jogger, Fetterman acknowledged to a Pittsburgh television station that he might have broken the law by chasing the man with a gun. Fetterman at the time didn’t mention anything about being a chief law enforcement officer.

The admission of possible wrongdoing in 2013 doesn’t square with his talking points now, said Fawn Walker-McDonald, a Black political consultant and former City Council member from McKeesport, near Braddock. Walker-McDonald hasn’t endorsed a candidate in the primary.

“He wasn’t the chief law enforcement officer. That insults our intelligence. He was a white man with a gun chasing a Black man,” Walker-McDonald said in an interview. “I used to be on the council in McKeesport, and if I chased after a person with a gun, I would still be in jail. He’s showing he’s not aware of his white privilege.”

A spokesman for Fetterman’s campaign said he started using the term “chief law enforcement officer” last year to push back against opponents like Kenyatta as they accused him of acting like a “vigilante.” His campaign also said he didn’t invent the term in relation to his duties as mayor and pointed out that the Pennsylvania Association of Borough Mayors uses the wording in a handbook to describe the duties of the office.

“I’m offended, as a Black social worker who worked side by side when Fetterman was mayor, that this is what his opponents are talking about,” said Lisa Freeman, a longtime supporter who criticized Lamb for living in a gated community and said Kenyatta hasn’t done enough to stop crime in North Philadelphia, where he lives.

“John was mayor of Braddock, a majority-minority community. So more often than not, a person running down the street would be Black,” she said. “Mayor Fetterman had barely a police department, barely a fire department. He had a police scanner he listened to. And when anything happened — a shooting, a fire — he was on hand.”

Freeman went on to note that Fetterman tattooed the names of murder victims on his arm when he was mayor. He has nine — all were Black.

Braddock Mayor Delia Lennon-Winstead, another Fetterman supporter, said he was repeatedly re-elected in the majority-Black city because he did a good job.

But her predecessor, former Mayor Chardae Jones, who succeeded Fetterman after he was elected lieutenant governor in 2018, said she’s supporting Kenyatta because she objected to Fetterman’s leadership style, describing it as more focused on getting national media attention and winning higher office.

At a hulking 6-foot-8 with a bald head and tattoos, Fetterman, the Harvard-educated white mayor of a predominantly Black city, won acclaim as a hands-on community-based blue-collar progressive, guaranteeing him more consistent national attention than any other small-town mayor in the country. Banking on his name recognition, his campaign hopes he can straddle the worlds of Black voters, white progressives and more conservative voters in rural parts of the state where Democrats have hemorrhaged support in recent elections.

His critics wonder whether Fetterman’s reluctance to apologize over the gun incident is a play for electability in November.

“He’s acting like he’s going to win the primary and that he doesn’t need us,” said Pittsburgh rapper and community organizer Jasiri X. “We’re looking at this and thinking, ‘OK, you would rather not apologize at our expense.’”

The Senate bid is the first campaign for Fetterman in which the 2013 incident has been fully explored. Aside from his repeated campaigns for mayor, Fetterman ran for a Senate seat in 2016, losing in the Democratic primary. He was elected lieutenant governor two years later.

As soon as he entered the Senate race in February 2021, The New York Times delved into the gun incident, and it has been chronicled in national and state media since then. Months after Fetterman declared his candidacy, the jogger, Christopher Miyares, told The Philadelphia Inquirer that Fetterman “lied about everything” because Fetterman knew he was Black and pointed a shotgun at him. Fetterman has denied that account.

“Even with everything I said, it is inhumane to believe one mistake should define a man’s life,” Miyares said in one of two letters sent to The Inquirer. “I hope he gets to be a senator.”

Miyares wrote his letters from prison, where he is incarcerated on charges of kidnapping, terroristic threats and unlawful restraint, among other crimes. He claims he’s innocent.

Khari Mosley, a go-to Pittsburgh consultant for turning out Black voters, said the problem with Fetterman’s response is that he has found himself in a public debate with a Black man over whether he pulled a gun on him and hasn’t discussed how laden with symbolism that is.

“There’s a lack of acknowledgment about how serious this is and how potentially wrong it could have gone and how tragic that situation could have been. It’s like it’s being downplayed,” Mosley said.

“I share this concern with Democrats all over the state that, once May 18th comes — and by all appearances he’s probably going to win — we know what the Republican machine is going to do or what it can do: run this into the ground and depress turnout. It’s going to hurt in Philly. It’s going to hurt here.”

A senior Republican consultant involved with Senate races nationwide said: “If we believe we need to communicate with voters about Fetterman the vigilante who pulled a gun on a Black man who hadn’t committed a crime, we will.”

Mustafa Rashed, a top Philadelphia Democratic consultant who specializes in Black voter turnout, agreed that Republicans can easily “weaponize” the incident. He said that the Democratic Senate race hasn’t received the same amount of attention in Philadelphia as the big-spending, brutal Republican primary and that the debate over the encounter with Miyares is crowding out a more robust discussion of the candidates’ policy positions.