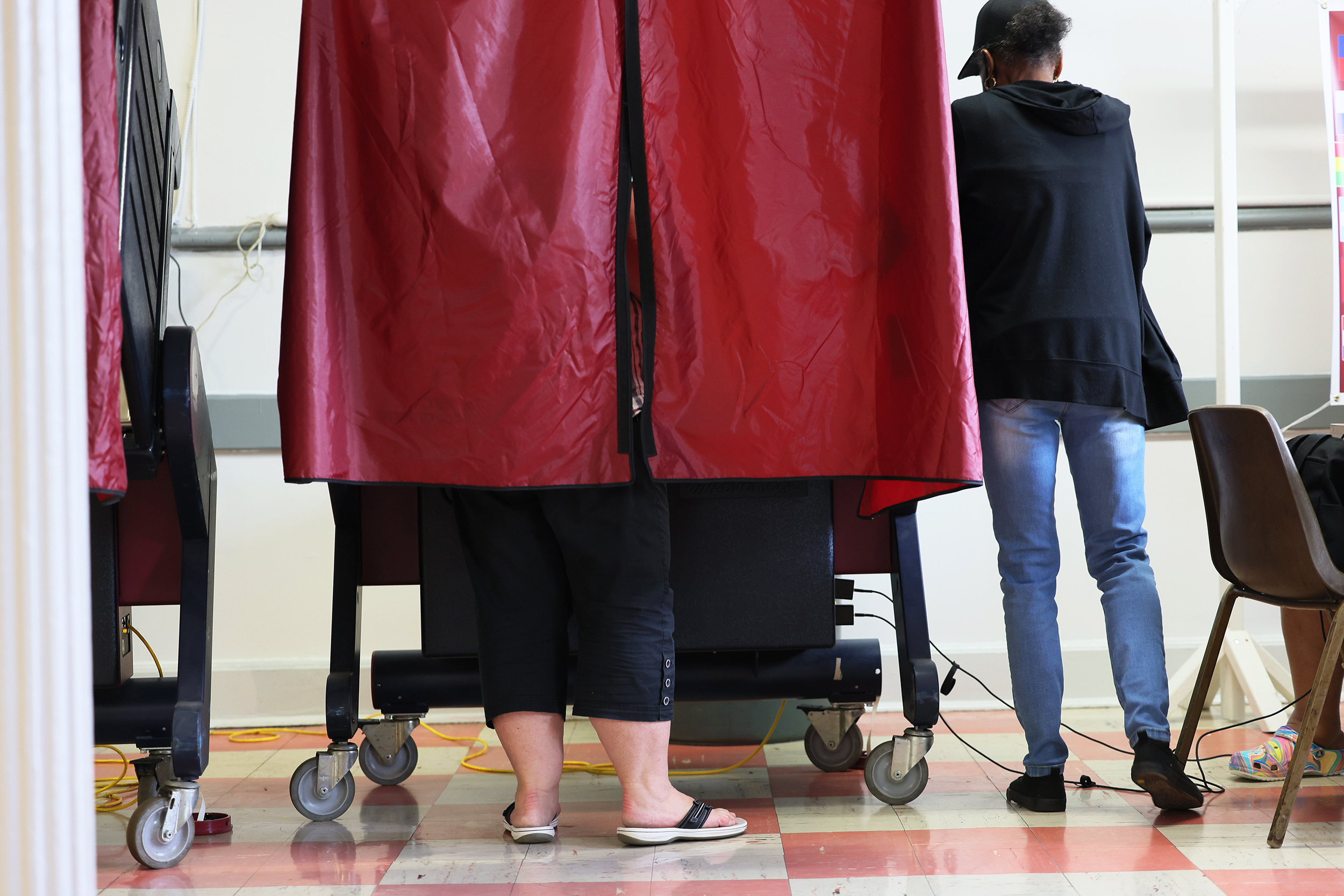 WASHINGTON — Polls have closed in most of the seven states holding primary elections Tuesday that will set the course for key congressional and other races in November.

While there are no major Senate or gubernatorial primaries on the ballot Tuesday, voters in two of the most famously progressive cities in the country — Los Angeles and San Francisco — could rebuke the left in high-profile local races.

And the battle for the House will come into fuller view as Republicans choose their nominees in districts that could decide whether Democrats retain their narrow majority in Washington.

In New Jersey, Republicans are eyeing a number of Democratic incumbents seen as vulnerable in the fall, including Reps. Andy Kim, Tom Malinowski and Mikie Sherrill. Republicans could have a harder time if far-right candidates emerge from primaries Tuesday, though most are under-funded compared to their more mainstream GOP rivals.

Former President Donald Trump called for the removal of Republican Rep. Chris Smith, the state’s longest-serving member of Congress, after he voted for President Joe Biden’s infrastructure plan. Some Trump-aligned figures like Roger Stone have been working against Smith, but Trump himself never endorsed an opponent and Smith still has the support of most local and national party leaders.

And a Garden State Democratic dynasty is expected to continue after Robert “Rob” Menendez Jr., the son of Sen. Robert “Bob” Menendez, won his party’s nomination in a deep-blue open seat just over the Hudson River from New York City, NBC News projects.

Polls have also closed in Iowa, New Mexico, South Dakota, Mississippi, while they close at 10pm ET in Montana and 11pm ET in California.

South Dakota Republican Sen. John Thune, deputy to Senate Minority Leader Mitch McConnell, easily won re-nomination, NBC News projects, despite earning Trump’s ire for not supporting his effort to overturn the 2020 election and initially wavering on whether he would run for re-election.

Democratic former Rep. Abby Finkenauer had been expected to challenge longtime Republican Sen. Chuck Grassley in November, but found herself in a tougher-than-expected primary against retired Admiral Michael Franken, who is currently leads in the too-early-to-call Democratic primary, according to NBC News.

Franken ran for Senate in 2020 and has positioned himself to Finkenauer’s left by supporting issues like Medicare for All.

Grassley will be difficult to beat, however, and Democrats are focused on trying to defend their only congressional seat in the state, held by Rep. Cindy Axne, who will face whoever emerges from Tuesday’s GOP primary. Axne is one of five House Democrats representing a district Trump would have won if the new post-redistricting congressional lines had been in place in 2020.

The biggest races Tuesday are all taking place in California, which is typically slow to count ballots and may not have final results right away.

In Los Angeles, an ex-Republican billionaire has emerged as an unlikely frontrunner to be the city’s next mayor, earning broad support in famously liberal Hollywood from left-leaning celebrities like Katy Perry, who has performed at Democratic National Conventions and been a reliable booster for the party.

Rick Caruso, a major real estate developer who joined the Democratic Party shortly before declaring his run for mayor, has dramatically outspent his main opponent, Democratic Rep. Karen Bass, and capitalized on mounting frustration with homeless and crime.

However, neither is expected to clear the 50 percent threshold necessary to avoid a runoff, so Caruso and Bass will likely face off in November.

In San Francisco, polls show voters may oust their headline-grabbing reformist District Attorney Chesa Boudin, who was elected on a Black Lives Matter-aligned platform to reform the criminal justice system, but has faced blowback due to rising crime rates and the perception that his office is not willing to do much about it.

If Boudin is removed from the DA’s office — formerly held by Vice President Kamala Harris — Mayor London Breed will appoint a temporary successor until an election can be held.

California is also home to a number of critical House races.

In two tossup districts currently held by Republicans, incumbent Reps. David Valadao and Young Kim are facing far-right challengers that have an outside chance of pushing them off the November ballot in the state’s all-party “jungle primary.”

Two candidates will advance to the general election, and Democratic super PACs have made a late push to boost the far-right challengers in the hope they will snatch the second spot on the ballot, leading Republican national groups to respond with their own late cash infusions.