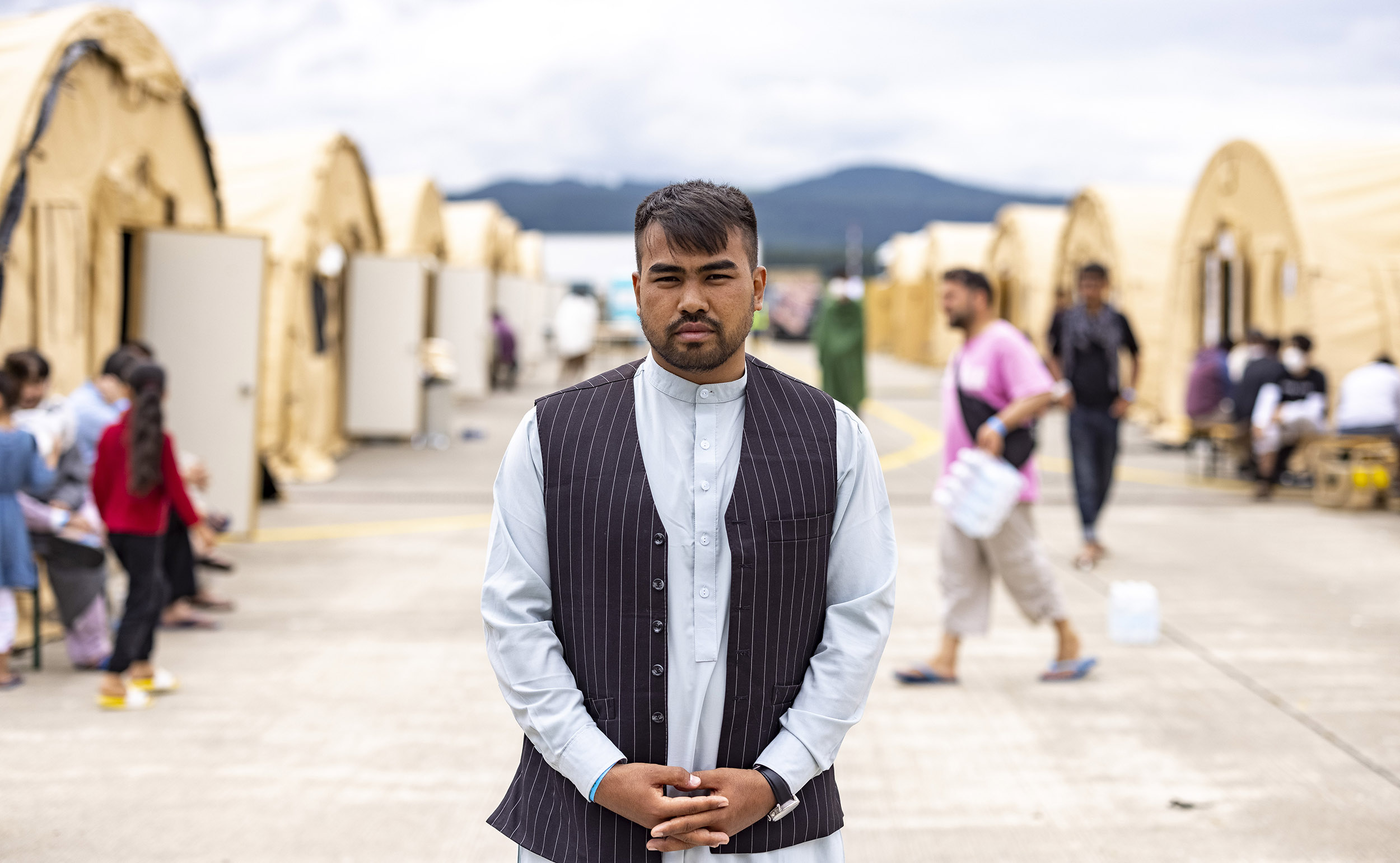 Thousands of Afghans — some too young to walk, others too old — deemed vulnerable and evacuated by the United States are now corralled together behind wire-mesh fences in this colossal American air base in western Germany. Shell-shocked at the Taliban takeover of Afghanistan, many fled for their lives, convinced the militant group would show them no mercy.

Gray military buildings, fences and roads cannot constrain the life bursting out of the rows of tents and airport hangars where people sleep. Men crouch over drains to wash their faces, clothes dry over fences, a child’s football soars over another only to be returned by a man in uniform.

Despite being surrounded by thousands of people, Maryam Rezaie, who wears red-rimmed glasses and has a moon-shaped face, feels all alone.

Still a teenager, she left Kabul by herself after getting separated from her family in the chaos on the way to Kabul airport. The family was fleeing the Taliban, she said, afraid they would be targeted because her father had worked for an American company.

Now she is thousands of miles away in Germany, under gray skies and in tears. She says she can’t reach her family, they’re not online.

“I’m here all alone and I have no one,” Maryam said Monday, while crying. “I really don’t know what will happen to my family.”

Maryam and other Afghans who traveled here are in purgatory, caught between the hell of Kabul and their uncertain new lives. They left with almost nothing, taking only what they could carry and wear.

On Monday, a deadly firefight brought renewed chaos to Kabul airport, where thousands of Afghans are still waiting to flee the country from an ascendant Taliban. Many stuck in the capital are becoming increasingly desperate, sending pleas of help to people abroad. Despite promising a general amnesty, the Taliban has resorted to violence as it attempts to consolidate control over the country.

At Ramstein Air Base, the recent arrivals clutch their phones — a lifeline of communication with their loved ones, a portal back to Afghanistan.

Despite being out of reach of the Taliban, Maryam said that her life felt uncertain and that she was concerned for her safety as a single woman among Afghan men.

Until recently the most daunting thing facing her was leaving home for college. Like other Afghans who made it here crammed onto U.S. military planes, she used to have plans. She had received a scholarship to study politics at a university in Iran. But then the U.S. began withdrawing and her life imploded.

Many of those in Ramstein had banked on President Joe Biden and his predecessors, and worked with the U.S. military, government or government-funded programs during the 20 years after the previous Taliban government was toppled.

While those in Ramstein may have been handed their ticket out, they know far more people who were left behind.

As of Wednesday morning, 7,500 people had been evacuated to Ramstein Air Base. That number makes up roughly 10 percent of the total number of people the U.S. government said Tuesday had been airlifted from Afghanistan since Aug. 14, but just a fraction of those desperate to escape.

The base has a capacity of up to 10,000 people, Brig. Gen. Joshua Olson, the base’s commander, told reporters Monday. Of those evacuated to Ramstein, some 300 were Americans and 700 were green card holders, a State Department spokesman said Monday.

The U.S. is scrambling to get other bases ready to receive more evacuees. A senior State Department official said Monday that eight transit hubs were open across six countries, and U.S. allies and partners were hosting more than 17,000 evacuees. The official said the U.S. was expecting capacity to continue to increase as other countries opened transit hubs.

But Washington is running out of time.

Biden said Tuesday that he was sticking to his current Aug. 31 deadline to withdraw troops from Afghanistan, despite pressure to extend it to allow for more evacuations. The Taliban have warned that the deadline is a “red line” — cross it and there will be consequences.

Meanwhile, Afghans in Ramstein sit and wait for news from their families.

“I’m here physically but mentally I’m not,” said Mustafa Sekandari, 25, who said he worked for the Afghan defense ministry in Kabul and is the only member of his family to make it out of the country. “I’m just thinking what will happen to them.”

His parents and four siblings are stuck in Kabul, and like others at the base he is terrified that his family will not make it out.

“In Afghanistan, no one knows their future,” he said.

Back in Ramstein, Afghan evacuees were being processed, put through health checks and fed.

U.S. Army Capt. Erin Brymer, 28, a registered nurse at Landstuhl Regional Medical Center, described to reporters Monday how she had delivered a baby on board an aircraft evacuating people from Afghanistan after it landed at Ramstein Air Base this weekend.

“She was understandably quite scared and I didn’t know if she spoke any English,” she said. “So I was just trying to be, like, eye contact, like, ‘You got this, mama.’”

Brymer, who is from Montclair, Virginia, said it was her first delivery outside of a hospital and on arriving at the aircraft she found a group of Afghan women gathered around the expectant mother, holding up shawls to protect her modesty.

“It was quite a beautiful sight to see,” she said.