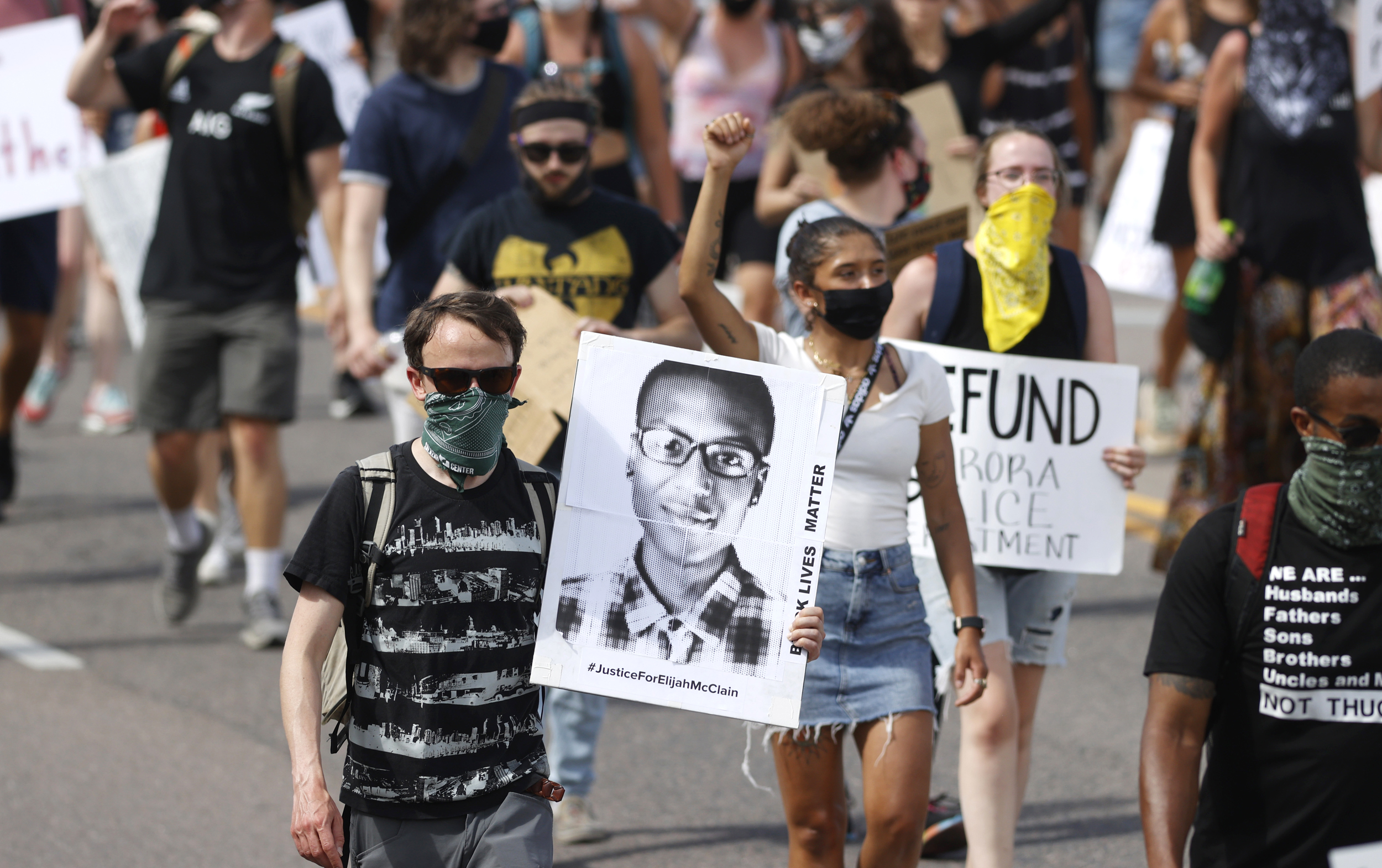 Two police officers, one former officer and two paramedics in Aurora, Colorado, will face charges in the death of Elijah McClain, a young Black man who was detained and placed in a chokehold in a confrontation with police in 2019. The indictment comes after an eight-month grand jury investigation convened by Colorado’s top prosecutor.

State Attorney General Phil Weiser on Wednesday said the five defendants will be charged with one count each of manslaughter and criminally negligent homicide, as well as other charges in the 32-count indictment.

The officers named in the indictment are Nathan Woodyard and Randy Roedema and former officer Jason Rosenblatt. The paramedics are Jeremy Cooper and Peter Cichuniec.

After earlier learning that a grand jury returned an indictment, McClain’s father, LaWayne Mosley, said he cried tears of joy.

“Nothing will bring back my son, but I am thankful that his killers will finally be held accountable,” Mosley said in a statement.

The announcement comes just over two years since the death of McClain, 23, prompted months of protests by activists that dovetailed into national demonstrations demanding systemic changes in policing galvanized by last year’s police killing of George Floyd, a Black man in Minneapolis.

Like Floyd, McClain had told police, “I can’t breathe” — a phrase that has been a familiar rallying cry against police brutality.

Representatives with the city of Aurora, the Aurora Police Department and the police union could not immediately be reached for comment Wednesday.

McClain’s encounter with police in Aurora, a Denver suburb, began just after 10:30 p.m. on Aug. 24, 2019, after he bought iced tea from a corner store. At the time, McClain, a massage therapist, was wearing a ski mask — which he typically did because of a blood condition that made him feel cold, according to his family.

Three Aurora police officers responded to a report of a suspicious person wearing a mask and waving his arms.

Bodycam video later released showed officers ordering McClain to stop. He responded that he was an introvert and to “please respect the boundaries that I am speaking.”

After questioning him, the officers grabbed McClain. One of them said he believed McClain had reached for a holstered gun, and McClain was brought to the ground. Aurora police said in a statement that he “resisted contact, a struggle ensued, and he was taken into custody.”

Authorities said officers applied a carotid control hold on McClain, a type of chokehold meant to restrict blood to the brain to render a person unconscious. Paramedics were called to the scene, and McClain was injected with ketamine to sedate him after police video showed him writhing on the ground saying, “I can’t breathe, please,” and vomiting. He apologized for vomiting.

About seven minutes after he received the drug, McClain was found to have no pulse in the ambulance and went into cardiac arrest, according to a report released in fall of 2019 by a local prosecutor, Dave Young. Medics were able to revive McClain, but he was later declared brain dead and taken off life support less than a week later.

The Adams County Coroner’s Office determined that McClain’s death was due to “undetermined causes,” and that the “evidence does not support the prosecution of a homicide,” according to Young’s report. Young declined to press charges against the officers.

But the coroner did not rule out that the chokehold, in addition to the ketamine, may have contributed to his death.

In addition, the three officers involved in taking McClain into custody were moved to “nonenforcement” duties. Two remain employed by the department, while a third was one of three officers fired in July 2020 after an internal investigation found they held a selfie photo session near a memorial site for McClain. A fourth officer also resigned as part of the scandal.

A lawsuit filed by McClain’s family in August 2020 alleges that excessive force used by the officers over a span of 18 minutes caused an increase of lactic acid in his blood, and mixed with the ketamine injected into him, negatively affected his respiratory system.

An independent probe commissioned by the city of Aurora and released in February concluded police had no justification to stop or use force to detain McClain, and responding paramedics sedated him with ketamine “without conducting anything more than a brief visual observation.”

The 5-foot-7, 140-pound McClain was given ketamine that would have been proper for a man weighing 190 pounds, according to the panel’s findings.

The report suggested a change in policy for paramedics responding to the scene with police, and said they should not act as an “arm” of the department.