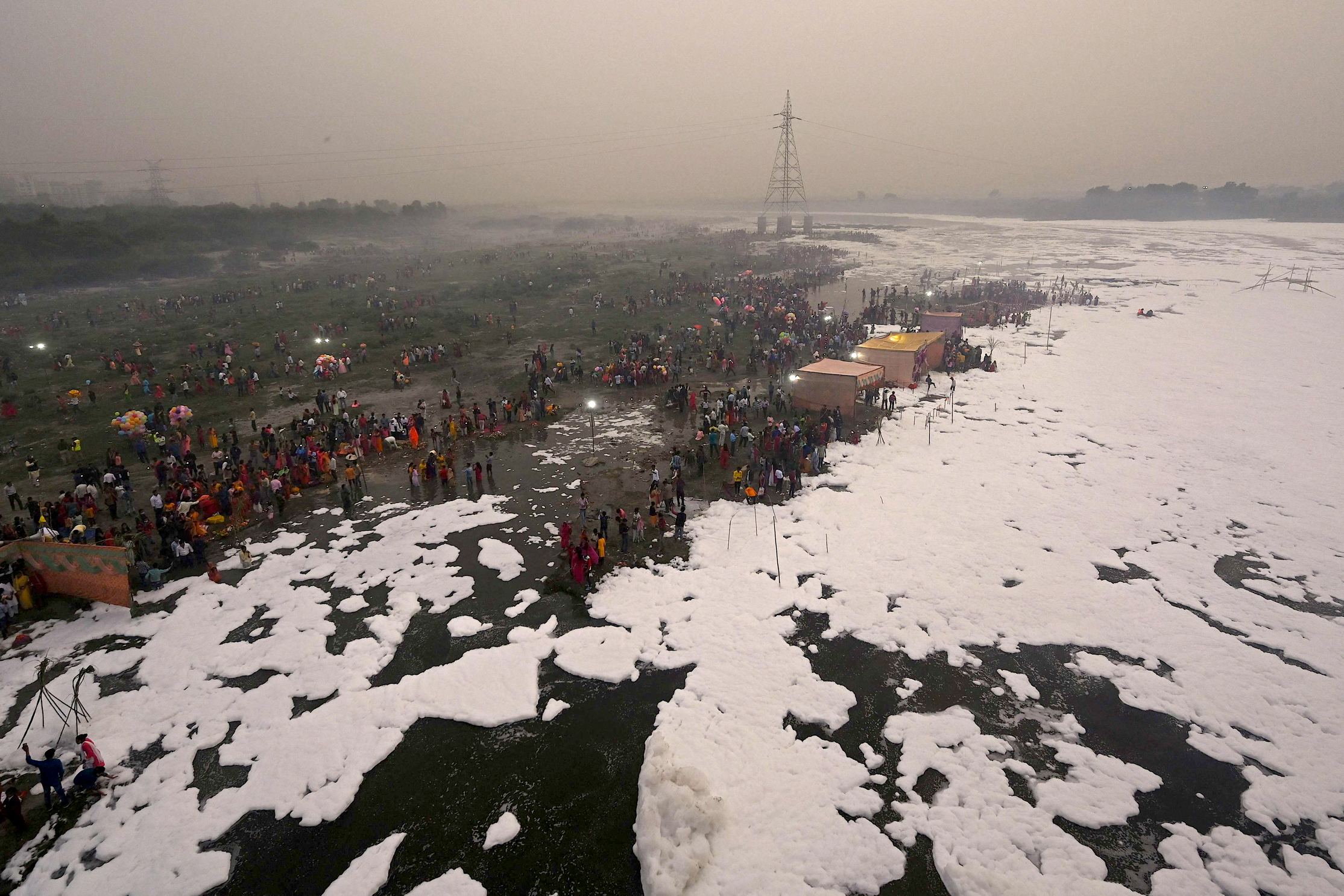 One of India’s most sacred rivers is covered in swathes of bright white toxic foam.

That didn’t stop thousands of Hindus wading into the Yamuna, which runs through the capital New Delhi, to celebrate a religious festival this week.

Worshippers held offerings to the sun god standing waist-deep in the river, while some bathed in the polluted waters. Children also played amid the toxic froth.

The foam is partly the result of poor management of waste from the nearby industrial hubs and New Delhi’s more than 20 million residents.

It’s caused by a high level of phosphates and surfactants in the river, combined with a low level of oxygen in the water and lower winter temperatures, Manoj Misra, the convener for the Yamuna Jiye Abhiyaan (Campaign of a Living Yamuna), a group which campaigns to regenerate the polluted river, told NBC News.

Besides worshippers bathing in it, the river also provides more than half of New Delhi’s water.

Chhath Puja, the Hindu festival, ran from Monday to Thursday. It includes fasting and making offerings to the deity, Surya, whilst standing in water.

Some worshippers saw the hazardous waste as a test of their faith.

“What fear? If we are scared, then how can we pray?” Rajesh Kumar Verma told the Associated Press.

The annual festival draws thousands of worshippers to the river’s banks, as well as international attention to India’s pollution problem.

Winters in particular have become a time of health woes, when the city is covered with a toxic haze that obscures the sky and air pollution levels reach catastrophic levels.

President Narendra Modi made a pledge during this month’s COP26 summit that his country will reach zero net emissions by 2070, two decades later than what experts estimate is needed to avert a climate crisis.

The Yamuna, around 855 miles long, is a tributary of the Ganges. But despite its status as one of India’s holiest rivers, it is also among its most polluted.

Toxic foam was also spotted in September, and the phenomena is not limited to India’s capital. In 2017, foam spewed out of the second-largest lake in Bangalore in the country’s south after monsoon rains.

City officials tried various means to get rid of the foam ahead of the festival, including deploying 15 boats to bat it away, laying down bamboo nets, and deploying water sprinklers, according to the Indian Express newspaper. Their efforts appeared to be of little effect.

Around a third of Delhi’s sewage is untreated before entering the Yamuna every day. But any improvement in the water’s quality likely remains years away.

New sewage treatment plants and other improvement works to fully trap sewage from entering the Yamuna are expected to be completed by 2023, according to a report by the Delhi Pollution Control Committee released in September.

Misra, the activist, said policies needed to change to ensure no untreated sewage or industrial wastewater enters the river.