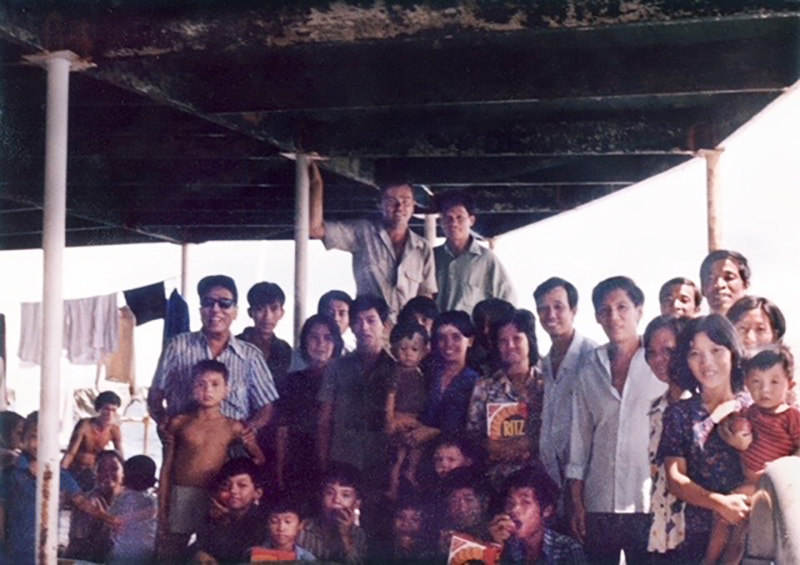 Lisa Dam fled Vietnam in 1978 with 50 other people, only to find themselves lost in the South China Sea, adrift on a fishing boat.

This month, she reunited with the man who helped save her and the others on board, including 18 children.

On April 30, 1975, the North Vietnamese Army took over Saigon, forcing the United States to abandon its embassy and evacuate more than 7,000 U.S. citizens and South Vietnamese allies by helicopter. The fall of Saigon prompted hundreds of thousands of Vietnamese to escape the country in the ensuing years.

“Many ships passed by and didn’t rescue us,” Dam, then 19, said, recalling the days floating without food and water, nauseated and losing hope.

The United Nations High Commissioner for Refugees estimates that between 200,000 and 400,000 people died trying to escape Vietnam by boat, their lives taken by storms, disease, starvation and pirates.

But that would not be Dam’s destiny.

Georg Pederson, the chief mate on the container ship “Gateway City,” spotted her fishing boat and alerted his captain.

“He told me, ‘Go down on the boat. Tell them they can have all the food and all the water, but we really can’t take them up,'” Pederson, now 88, said.

Once he got closer and saw the families crammed into the boat, Pederson insisted on bringing them onto the massive container ship, assuring his captain he would take responsibility for documenting every single person.

“Out on the sea, we are all brothers and sisters. If somebody needs help, you give ‘em help,” Pederson said. “I said, ‘Look, Captain, I recommend we can’t leave them here.'”

Anh and Van Truong were also on board — ages 4 and 9 at the time.

“That decision that he made changed everything for us. There’s no words to describe the gratefulness we feel for him,” Van Truong said.

For years, Pederson tried to find all 51 refugees on the boat. He had his first breakthrough in 2018 when a curious and computer-savvy Seattle neighbor saw a photo of the boat on his office wall and asked about it. Pederson provided her a list of the names he had kept for more than four decades.

“She said, ‘Give me the list of the names and I’m gonna try to help you to find them.’ And she went in there, on the computer in the evening. Next morning she came back with a telephone. “Here’s Minh.”

Minh Nguyen was 2 at the time, and he was the first of the 51 refugees to reconnect with Pederson in 2018.

Many of them, like Lan Truong, sister to Anh and Van, say they have never forgotten what Pederson did.

“I became a social worker. I want to give back to the community to help other people like Georg has inspired me to do,” Lan said.

Over the years, Pederson has reunited with 28 of the people he helped save, including Dam, who flew to Palm Springs this month to meet him. Now a researcher at Johns Hopkins University, she credits him with giving her a second chance at life.

In a toast to Pederson, Dam said, “I felt I had to be here to personally thank the man who saved our lives. Without you we would not have been here. You have given us a chance for a new life, for freedom, and new opportunity in America. It’s the American dream, but without you, we would not be able to accomplish that. So from the bottom of my heart, and other refugees you rescued, we forever owe it to you.”

Pederson is still hoping to find the 23 people he has yet to reunite with.

“I want to know what happened to all of them, especially the kids.”