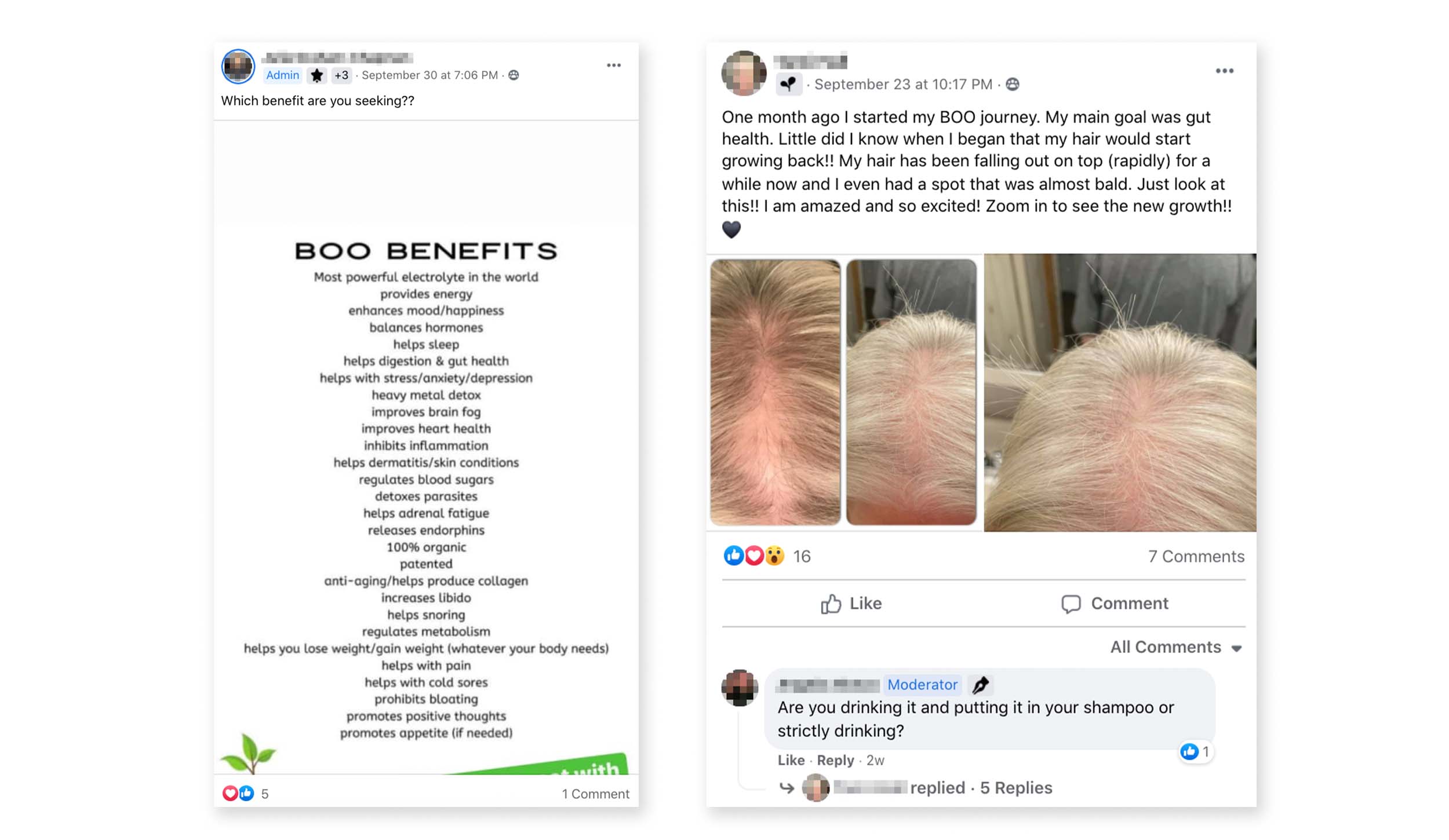 In the last several months, the groups have seen a rise in members from anti-vaccine and Covid-denial communities, including prominent activists who sell the product to raise funds for anti-vaccine efforts.

A profile of one top seller featured in BOO’s semiregular glossy magazine, “The Bog,” noted that Covid had drawn more people to the industry.

“It’s been kind of a blessing,” the seller said.

While it undoubtedly attracted sales and built teams, Facebook also created a unique problem for Black Oxygen Organics: Those testimonials might have violated federal law that requires efficacy claims be substantiated by “competent and reliable scientific evidence.” They also attracted attention, not only from customers, but from health professionals, regulatory agencies and a group BOO executives have dubbed “the haters.”

After a summer of unbridled success, the internet backlash began.

The rise of MLMs online prompted criticism from some people who have created informal activist groups to bring awareness to what they say are the predatory practices of MLM companies and organized campaigns to disrupt specific businesses. Many of the groups use the same social media techniques to organize their responses.

Online activists who oppose MLMs formed Facebook groups targeting BOO for its claims. Members of these groups infiltrated the BOO community, signing up as sellers, joining pro-BOO groups, and attending BOO sales meetings, then reporting back what they had seen to the group. They posted videos of the company meetings and screenshots from the private BOO sales groups and urged members to file official complaints with the Federal Trade Commission and the Food and Drug Administration.

“The health claims, I had never seen them that bad,” Manchester said. “Just the sheer amount. Every single post was like, ‘cancer, Covid, diabetes, autism.’”

“I don’t feel like people are stupid,” Manchester said of the people who purchased and even sold BOO. “I think that they’re desperate or vulnerable, or they’ve been preyed upon, and you get somebody to say, ‘Hey, I’ve got this product that cures everything.’ You know when you’re desperate like that you might listen.”

Black Oxygen Organics is the brainchild of Marc Saint-Onge, a 59-year-old entrepreneur from Casselman, Ontario. Saint-Onge, BOO’s founder and CEO, did not respond to calls, texts, emails or direct messages.

But decades of interviews in local press and more recently on social media offer some details about Saint-Onge, or, as he likes to be called, “the mudman.”

Saint-Onge describes himself as an orthotherapist, naturopath, kinesitherapist, reiki master, holistic practitioner, herbalist and aromatherapist. As he said in a video posted to YouTube that has since been made private, his love of mud began as a child, chasing bullfrogs around Ontario bogs. Years later, he went on to practice orthotherapy, a kind of advanced massage technique, to treat pain. He said he packaged dirt from a local bog, branches and leaves included, in zip-lock baggies and gave them to his “patients,” who demanded the mud faster than he could scoop it.

Saint-Onge said he was charged by Canadian authorities with practicing medicine without a license in 1989 and fined $20,000.

“Then my clinic went underground,” he said on a recent podcast.

He has sold mud in some form since the early 1990s. Health Canada, the government regulator responsible for public health, forced him to pull an early version of his mud product, then called the “Anti-Rheuma Bath,” according to a 1996 article in The Calgary Herald, because Saint-Onge marketed it to treat arthritis and rheumatism without any proof to substantiate the claims. Saint-Onge also claimed his mud could heal wounds, telling an Ottawa Citizen reporter in 2012 that his mud compress healed the leg of a man who had suffered an accident with a power saw, saving it from amputation.

“The doctor said it was the antibiotics,” he said. “But we believe it was the mud.”

In the ‘90s Saint-Onge began selling his mud bath under the “Golden Moor” label, which he did until he realized a dream, “a way to do a secret little extraction,” in his words, that would make the dirt dissolve in water. In 2015, with the founding of his company NuWTR, which would later turn into Black Oxygen Organics, Saint-Onge said he finally invented a dirt people could drink.

In 2016, he began selling himself as a business coach, and his personal website boasted of his worth: “I sell mud in a bottle,” he wrote. “Let me teach you to sell anything.”

In September, Montaruli, BOO’s vice president, led a corporate call to address the Facebook groups and what he called “the compliance situation.”

“Right now, it’s scary,” Montaruli said in a Zoom call posted publicly, referring to the outlandish claims made by some of BOO’s sellers. “In 21 years, I have never seen anything like this. Never.”

“These outrageous claims, and I’m not even sure if outrageous is bad enough, are obviously attracting the haters, giving them more fuel for the fire, and potential government officials.”

Montaruli called for “a reset,” telling BOO sellers to delete the pages and groups and start over again.

One slide suggested alternatives for 14 popular BOO uses, including switching terms like ADHD to “trouble concentrating,” and “prevents heart attack” to “maintain a healthy cardiovascular system.”

And so in September, the Facebook groups evolved — many went private, most changed their names from BOO to “fulvic acid,” and the pinned testimonials from customers claiming miracle cures were wiped clean, tweaked or edited to add a disclaimer absolving the company from any liability.

But that wasn’t the end of the company’s troubles. While individual sellers navigated their new compliance waters, regulatory agencies cracked down.

Days after Montaruli’s call, Health Canada announced a recall of Black Oxygen Organics tablets and powders, citing “potential health risks which may be higher for children, adolescents, and pregnant or breastfeeding women.” Further, the regulatory agency noted, “The products are being promoted in ways and for uses that have not been evaluated and authorized by Health Canada.”

Inventory for U.S. customers had already been hard to come by. In private groups, sellers claimed the product had sold out, but in the company-wide call, Montaruli confirmed that the U.S. Food and Drug Administration was holding its products at the border.

Saint-Onge did not respond to requests for comment from NBC News. Phone messages and emails sent by a reporter to the company, its executives and its legal counsel were not returned.

BOO is not the only dirt-like health supplement on the market. Consumers have the option of dozens of products — in drops, tablets, powders and pastes — that claim to provide the healing power of fulvic and humic acid.

Fulvic and humic acids have been used in traditional and folk medicines for centuries, and do exhibit antibacterial qualities in large quantities. But there is little scientific evidence to support the kinds of claims made by BOO sellers, according to Brian Bennett, a professor of physics at Marquette University who has studied fulvic and humic acids as a biochemist.

“I would say it’s snake oil,” Bennett said. “There is a lot of circumstantial evidence that a pharmaceutical based on the characteristics of this material might actually work, but I think eating handfuls of soil probably doesn’t.”

Beyond the questions of the health benefits of fulvic acid, there’s the question of just what is in Black Oxygen Organics’ product.

The company’s most recent certificate of analysis, a document meant to show what a product is made of and in what amounts, was posted by sellers this year. Reporting the product makeup as mostly fulvic acid and Vitamin C, the report comes from 2017 and doesn’t list a lab, or even a specific test. NBC News spoke to six environmental scientists, each of whom expressed skepticism at the quality of BOO’s certificate.

Assuming the company-provided analysis was correct, two of the scientists confirmed that just two servings of BOO exceeded Health Canada’s daily limits for lead, and three servings — a dose recommended on the package — approached daily arsenic limits. The U.S. Food and Drug Administration has no comparable daily guidelines.

In an effort to verify BOO’s analysis, NBC News procured a bag and sent it to Nicholas Basta, a professor of soil and environmental science at Ohio State University.

The BOO product was analyzed for the presence of heavy metals at Ohio State’s Trace Element Research Laboratory. Results from that test were similar to the company’s 2017 certificate, finding two doses per day exceeded Health Canada’s limit for lead, and three doses for daily arsenic amounts.

Growing concern among BOO sellers about the product — precipitated by an anti-MLM activist who noticed on Google Earth that the bog that sourced BOO’s peat appeared to share a border with a landfill — pushed several to take matters into their own hands, sending bags of BOO to labs for testing.

The results of three of these tests, viewed by NBC News and confirmed as seemingly reliable by two soil scientists at U.S. universities, again showed elevated levels of lead and arsenic.

Those results are the backbone of a federal lawsuit seeking class action status filed in November in Georgia’s Northern District court. The complaint, filed on behalf of four Georgia residents who purchased BOO, claims that the company negligently sold a product with “dangerously high levels of toxic heavy metals,” which led to physical and economic harm.

Black Oxygen Organics did not respond to requests for comment concerning the complaint.