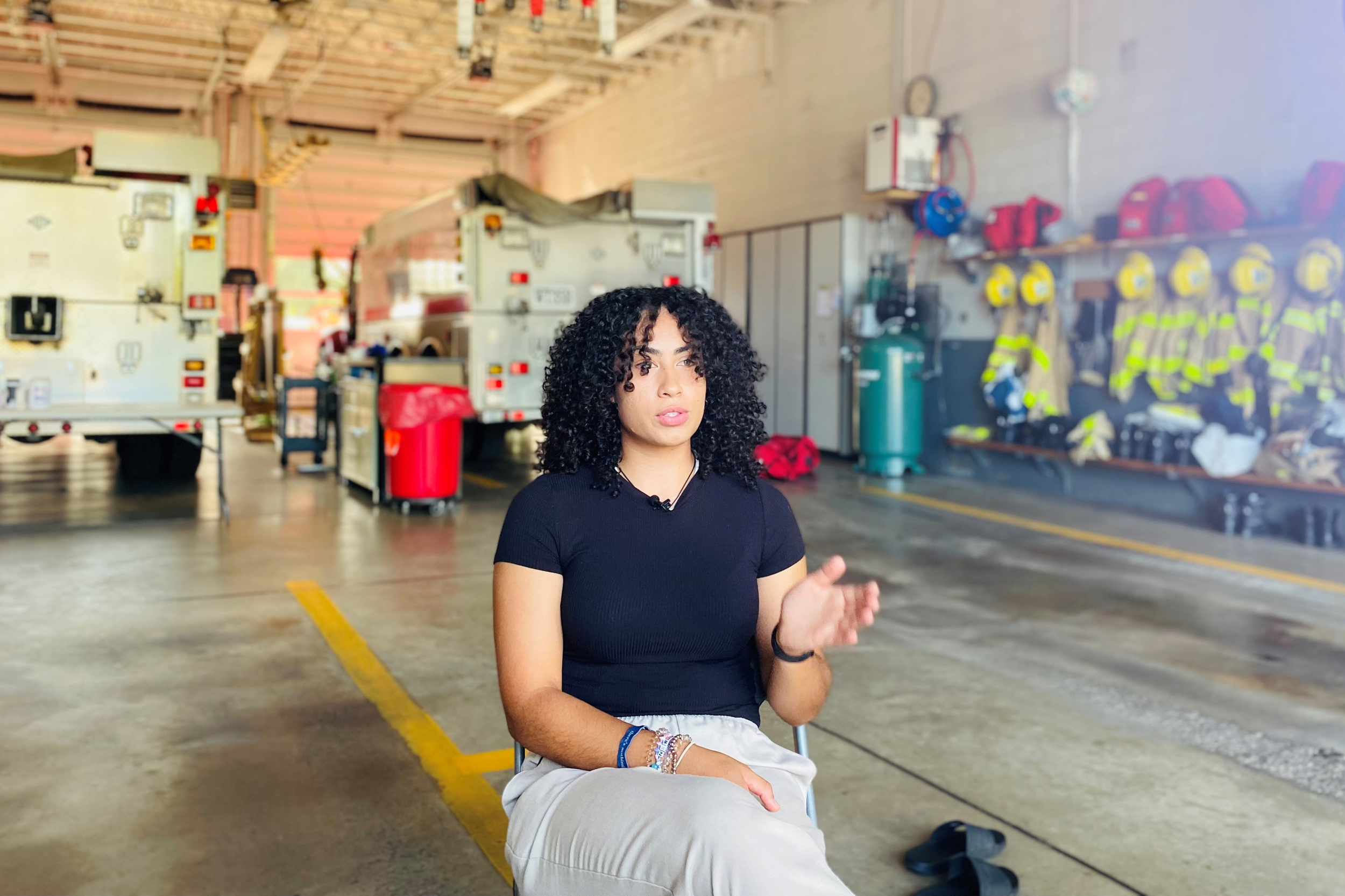 TUALATIN VALLEY, Ore. — Capt. Karen Bureker didn’t know if she wanted to have children when she first became a firefighter paramedic nearly 20 years ago.

But after getting married, Bureker and her husband decided to start a family. It was during her first pregnancy, after six years on the job, that Bureker realized just how difficult the transition from firefighter to mother would be while rising through the ranks of her male-dominated profession.

“It’s really a great job to be a mom, but it’s a really hard job,” she said. “My kids, as they get older, are starting to understand some of the risks that we take. But they love having their mom be a firefighter.”

Bureker, 44, is part of a rare sorority. Earlier this month, she became the first female fire captain at Tualatin Valley Fire and Rescue near Portland, where she started her career some 19 years ago. Back then, just six women worked as firefighters in the department, she said.

“We were definitely new to the fire scene,” she added. “The world has changed a lot since then, and our jobs have changed a lot. We’ve had a lot of men with a lot of interest in pushes that have helped move us into a more inclusive and diverse fire service.”

Despite the push for more diversity in hiring, less than 5 percent of career firefighters across the country are women, according to the National Fire Protection Association. Like their male counterparts, these women face increasingly dire conditions as drought, climate change and heat waves contribute to longer, hotter and deadlier fire seasons.

These women also face added mental stress from gender discrimination, plus an increased risk of miscarriage and other reproductive problems from repeated exposure to smoke and other toxins.

“When you think of a firefighter, you think of a man,” said Jenna Gray, who recently attended a fire camp for young women interested in learning more about the profession. “I think it’s really important for young girls to see that they, too, can do these jobs that only men over the last who knows how many years have been doing. It just gives you a sense of ‘I can do anything.'”

Yet a new generation of female firefighters is confronted with a system that was never built to include them. Few departments offer uniforms tailored specifically to women, forcing them to wear protective gear that fits incorrectly and exposes them to environmental hazards.

According to the Firefighter Cancer Support Network, 70 percent of active-duty firefighter deaths in 2016 were caused by cancer. Firefighters have a 9 percent higher risk of being diagnosed with cancer and a 14 percent higher risk of dying from cancer than the general population, according to the Centers for Disease Control and Prevention and National Institute for Occupational Safety and Health.

Women in the field also face gender-specific cancers that have yet to be fully studied and understood, including how chemicals in firefighting gear and in smoke may affect their reproductive organs.

All firefighters are regularly exposed to chemicals, including carbon monoxide and other carcinogens, that have been linked to miscarriage, birth defects, slowed fetal growth and impeded brain development, according to the International Federation of Gynecology and Obstetrics.

A 2018 study found that 27 percent of firefighter pregnancies ended in miscarriage, and pre-term births were nearly 7 percentage points higher than the national average of 10 percent. The study also found that “despite the recognized risks to maternal and child health, quantitative data on pregnancy outcomes are lacking from the current literature.”

“The lack of scientific data on the impact of occupation-specific hazards on reproductive health have been cited as limiting fair employment policies and employee rights as early as three decades ago and as negatively impacting recruitment and retention among women firefighters,” the authors wrote.

When Bureker first joined Tualatin Valley Fire and Rescue, the department had no official pregnancy policy. She worked to change that over the years by creating a reproductive health packet for all members of the force, including women.

Bureker and her colleagues participate in a fire camp every year for young women between the ages of 16 and 21. Started in 2009 in the Portland metro region, the camp is an opportunity for a new generation of potential firefighters to throw ladders, repel from buildings and practice extinguishing fires.

The three-day fire camp is free for young girls and allows for an opportunity to see female firefighters in action and envision those roles for their future. Gray said after her experience, she wants to join a crew eventually and make firefighting a career.

Jen Ward, who works as a firefighter paramedic at Tualatin Valley Fire and Rescue, led this year’s fire camp outside Portland. She said she still feels emotional thinking about the young women she met.

“It kind of makes me choke up a little bit, the things that some of these girls say, and how powerful we have been to them is just mind-blowing,” she said. “I tell them, ‘As excited as you guys are to be here, I am so beyond proud of you. And the things that you girls did and have done and can do, there are no limitations. Don’t ever let anybody tell you that you can’t do what you want.’”

Oregon state Rep. Dacia Grayber, a Democrat who represents portions of Multnomah and Washington counties, was 10 years old when she turned to her volunteer firefighter dad and told him she wanted to follow in his footsteps. A captain standing nearby scoffed.

“‘Oh, honey, girls aren’t firefighters,’” she recalled the captain saying, “‘but you could join the ladies auxiliary and you could bake cookies.’”

Grayber is now a mother of four and has been fighting fires for two decades. Last year, she became the second firefighter in the country elected to a state legislature and helped push through a bill in the Oregon House of Representatives that will ensure 12 weeks of paid family leave for all residents starting in 2023.

Before Grayber decided to run for office, she found herself sitting in a meeting with Rep. Suzanne Bonamici, a Democrat, on the lawmaker’s efforts to ban asbestos when her phone screen lit up. Her husband, also a firefighter, texted her that he had been diagnosed with an advanced case of throat cancer.

“We realized we’re a dual firefighting household. We have four kids. How do we do this?” Grayber wondered. “I would have to use all of my sick leave. And wouldn’t it be amazing if we had something like paid family leave? So we took our story to the state Capitol and testified on that.”

Getting her start in the so-called boys club wasn’t easy. When Grayber told her ex-husband she wanted to become a firefighter, he said it was “cute.”

Her first job as a professional firefighter was at a station where they had never hired a woman before. During a tour, she noticed some inappropriate magazines lying around a locker room. When she arrived on her first day of work, the magazines had been replaced with a pink towel, a vase filled with plastic flowers and Sunset travel magazine.

“It was the funniest thing,” she said. “I very quietly just put them all away. Like, we don’t have to do that.”