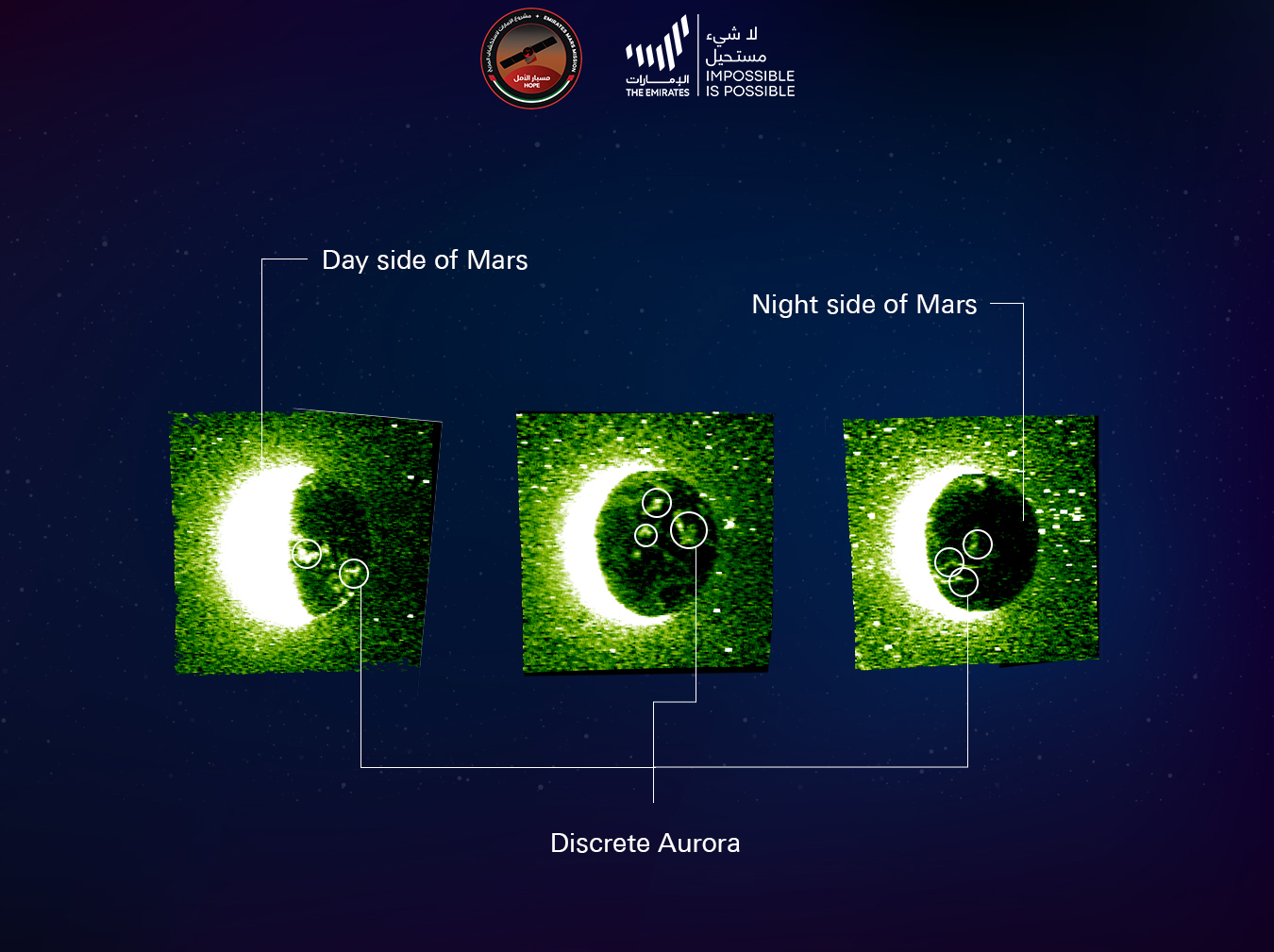 A spacecraft around Mars has captured the clearest views yet of alien auroras on the red planet.

The United Arab Emirates’ Hope probe, which arrived at Mars in early February, spotted the scattered glow of auroras in the Martian night sky. The stunning observations could help scientists better understand the atmosphere of Mars and how auroras on the red planet differ from similar light shows that are visible on Earth.

Auroras occur when charged particles from space interact with atoms in the atmosphere, energizing them and causing them to glow. On Earth, this plays out as the northern and southern lights. When high-energy particles from the sun hit the planet’s magnetic field, they energize atoms in the upper atmosphere to create spectacular displays of green, purple, red and blue lights.

But on Mars, auroras are different because the red planet is thought to have lost its global magnetic field billions of years ago, in a mysterious process that caused Mars’ once-thick atmosphere to be slowly stripped away.

“What we see instead are magnetic fields that are kind of unique to Mars,” said Justin Deighan, a planetary scientist at the University of Colorado and deputy science lead for the Hope orbiter’s mission. “They originate from minerals in the crust of Mars that formed during the early solar system, back when we think Mars had a global magnetic field like Earth.”

Remnants of Mars’ magnetic field are essentially locked into these minerals, which are scattered around the planet, Deighan added.

“Because of that, charged particles don’t get funneled toward the north and south poles, like where we typically see auroras on Earth,” he said. “On Mars, they’re sort of all over the place.”

These types of atmospheric light shows, localized over specific magnetic zones, are known as discrete auroras.

Scientists are keen to study auroras on Mars because they not only reveal properties of the planet’s atmosphere but can solve other mysteries of the solar system.

“It plays into these big-picture questions about how planets interact with their star,” Deighan said. “How does energy from the sun affect the upper atmosphere of planets?”

While Mars and Earth are very different worlds, what happens on the red planet can inform things closer to home.

“There have been times in Earth’s past where the global magnetic field reoriented or became weak, so during those transitional periods, Earth would have been more like Venus or Mars,” Deighan said. “In that sense, Mars can tell us things about Earth that we can’t really study in current times.”

The discrete auroras were observed in late April and early May, when scientists with the Emirates Mars Mission were testing instruments aboard the Hope probe. The orbiter, which launched into space in July 2020, is designed to study the atmosphere of Mars.

The auroras, captured in ultraviolet light, were the first major science findings for the Emirates Mars Mission.

“The whole science team is thrilled,” Deighan said. “It was nice to have this cool moment and rewarding to see so early on.”