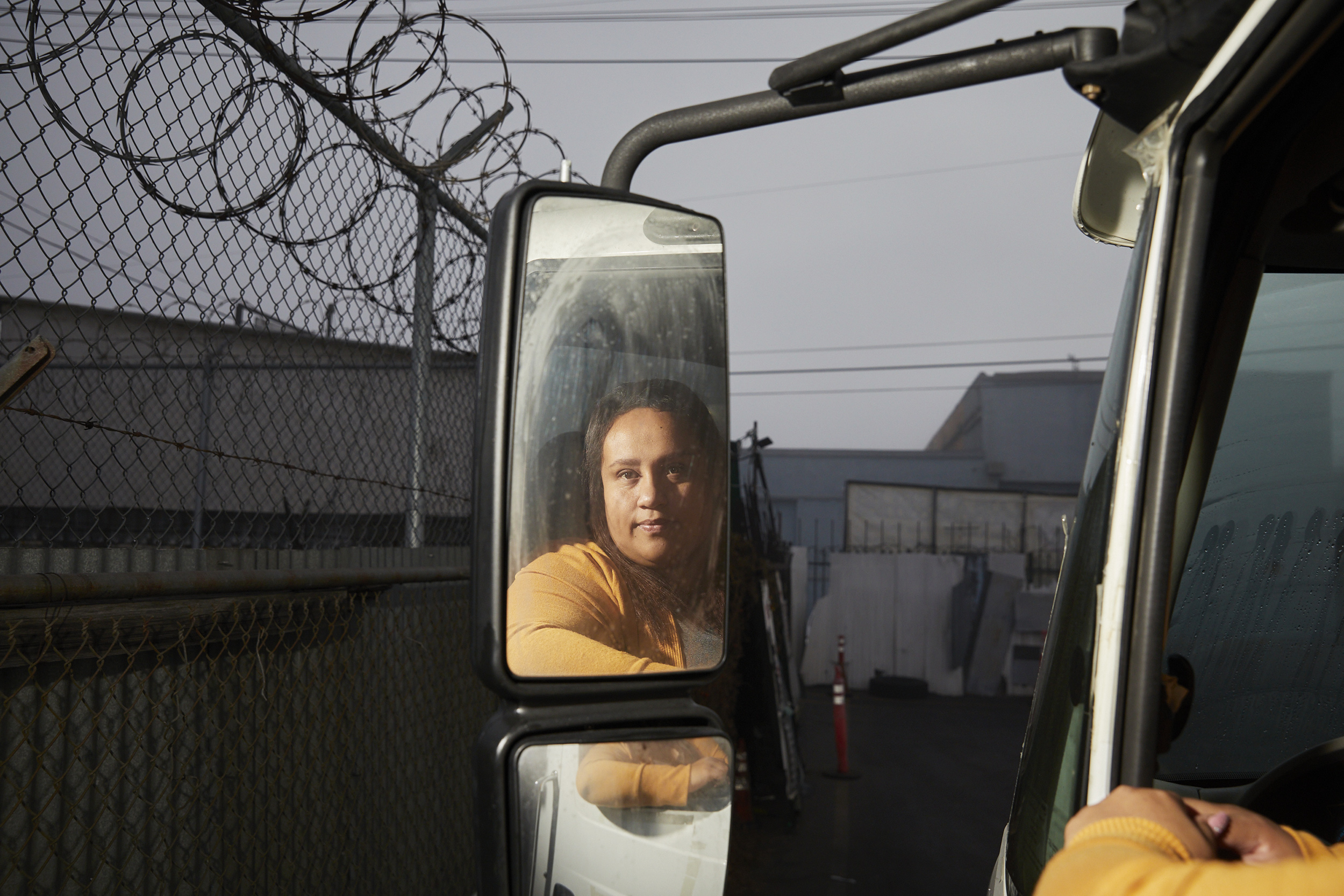 As Covid lockdowns have eased, employment among Latinas is recovering faster than among Hispanic men, said Mónica García-Pérez, an economics professor at St. Cloud State University in Minnesota, who specializes in labor economics.

So far, trucking isn’t attracting Latinas nationwide, but there may be regional increases in areas with concentrations of warehouses and distribution centers, García-Pérez said.

Those re-entering the workforce appear to be filling jobs in fields that have been more male-dominated, such as packing and shipping, she said.

Antoinette McIntosh, 42, was working as a financial adviser at an East Coast bank when the market crashed in 2008. Her job and her six-figure salary disappeared overnight.

A good friend, Robert Montgomery, who later became her fiancé, told her to cash in on her love of driving and join him at his company as a truck driver.

The company they worked for paid for her transportation to Salt Lake City and training in exchange for the couple’s working for the company for a year.

“I’ve been in it ever since,” said McIntosh, who is Black and Puerto Rican and lives in the Cleveland, Mississippi, area. She has been a truck driver for 15 years.

McIntosh’s father also had been a truck driver, and her parents “did everything they could to keep me out of a truck,” she said. Trying to fulfill their wishes, she went to college, double-majored in psychology and social work and “made everyone else happy.”

McIntosh now makes more than she did at her bank job, she said.

“What a lot of people don’t tell you is this pays you better than a white-collar job in a lot of businesses, so it’s not so much of a stigma anymore,” McIntosh said.

Shifting in the pandemic

Rosio Villagrana, 35, got her Class A truck driver’s license on July 30. The company that hired her told her it hadn’t had a female truck driver for several years, she said.

She had worked in and managed a pawn shop for about a decade. But her friends’ work driving semi-trailer trucks had long intrigued her.

With time on her hands and feeling restless confined to work and home early in the pandemic, Villagrana decided to give truck driving a try.

“Why not?” she recalled saying. “I’m so for women empowerment. I feel like we are capable of what we do, plus more, especially in this male-dominated industry.”

Ultimately, her goal is to be an owner-operator and one day own her own fleet of trucks.

Tracy Barajas, 27, of Corona, California, has been driving trucks for three years. She had worked in online fashion stores and as a dispatcher for a plumbing company.

Her boyfriend, Oscar Hernandez, and cousins, who were truck drivers, inspired her to make the jump into trucking, she said.

Barajas said she had lived paycheck to paycheck before she got into trucking. She had briefly attended community college with plans to be a psychologist.

In trucking, she and Hernandez, who drive as a team and log their journeys online, have individually saved tens of thousands of dollars, and she makes four times her previous income, she said.

“I never in my head would have thought that I would be able to or I would be in truck driving,” Barajas said.

Steering through sexism, danger and scams

All of the positive accounts notwithstanding, trucking can be a dangerous profession, and it can affect marriages and families. Not everyone experiences a financial windfall.

McIntosh said her marriage ended over trucking. Her spouse at the time she started didn’t want her driving trucks.

She also lost money when she leased a truck from her employer. Costs for maintenance, gasoline, inspection and registration tags, insurance and other expenses were deducted from her paycheck, McIntosh said. She was falling short even when she increased her workload.

McIntosh ended up joining a class-action lawsuit against the company, which settled with her and other drivers over the leasing arrangement.

McIntosh used to travel with her fiancé, Montgomery. On a trip in Wisconsin in June, he suffered a massive heart attack while they were in their truck cab. He died in her arms, she said.

She continues to drive, in part, to keep a promise to help support his brother who has autism, she said.

Barajas was rear-ended by a drunk driver while she was driving a truck in Colorado in February 2020.

Soon after the accident, her company reduced her and her boyfriend’s wages by 10 cents and terminated their benefits, including their health care plan and their 401(k) retirement benefits.

Barajas and her boyfriend switched to driving for FedEx in May 2020 and are making a good living again.

Wood, of Real Women in Trucking, said that as more Latinas start driving trucks, there is a need for caution.

Women are often paired with male drivers they don’t know for training, and that’s where “a lot of women fall through the cracks,” she said. Some are raped or harassed and then retaliated against when they report the incidents, she said.

The Federal Motor Carrier Safety Administration has been studying harassment and assaults of women and minority truckers.

None of the Latinas who were interviewed said they had experienced any physical sexual harassment or assaults.

Barajas said she gets hateful and sexist comments on her YouTube page for being a woman who drives a truck. But the comments that stick with her are from women who say she inspires them, she said.

Student drivers also can be exploited because they work for low wages while they are in training, Wood said. She warns women not to enter company-sponsored training, although the women interviewed for this article said they had good experiences.

The American Trucking Association, the trade and lobbying group for major trucking employers, reported that the annualized turnover rate for truck drivers last year was 90 percent, a point less than it was in 2019. For smaller fleets, it was 69 percent, down from 72 percent. A lot of the turnover happens in truckers’ first year, Wood said.