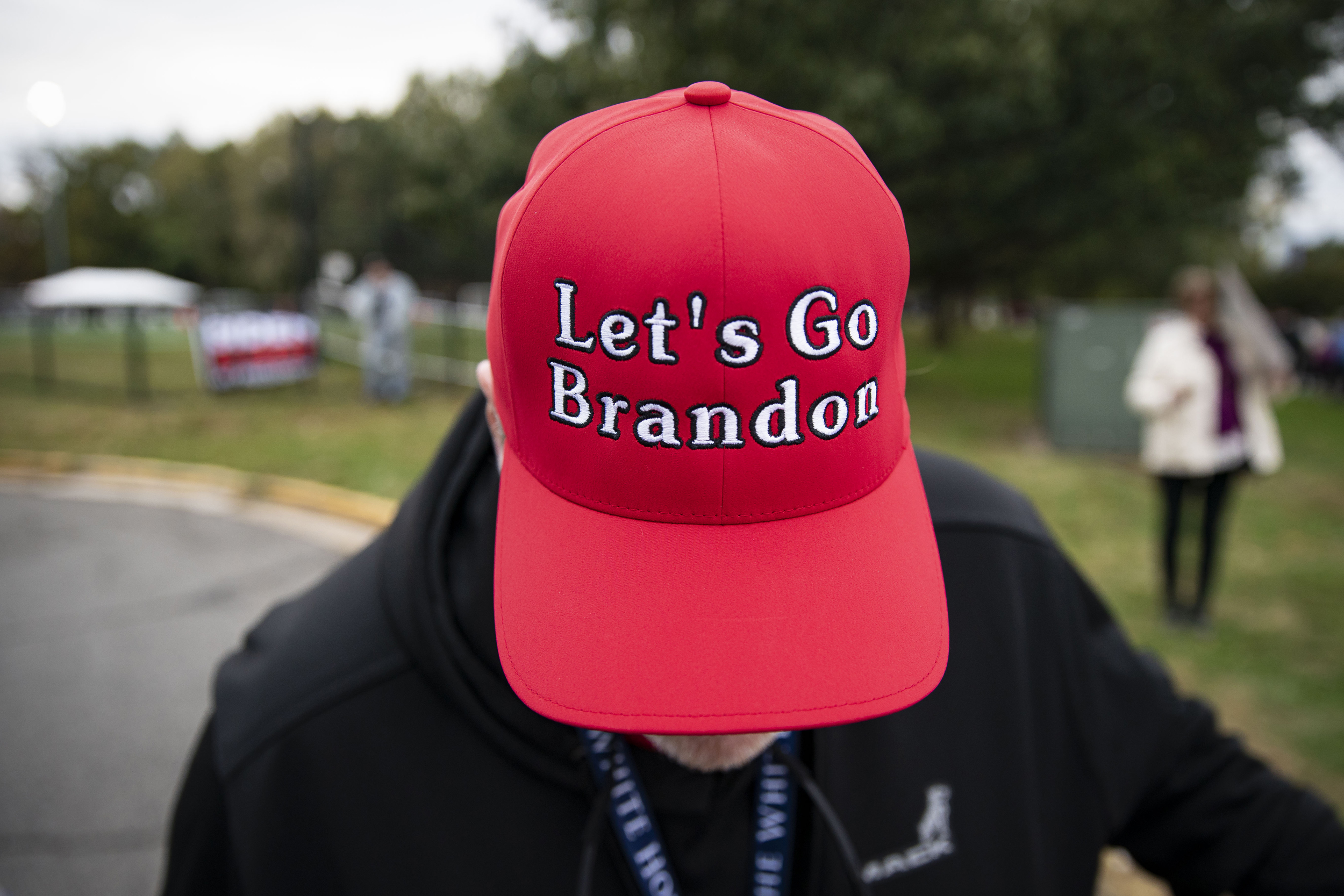 LANSING, Mich. — Janice Daniels, a staunch supporter of former President Donald Trump, was speaking at a rally protesting the 2020 election results early last month when chants of “Let’s Go Brandon” began to move through the crowd.

“I’ll be honest with you, I’m not really sure what that means,” Daniels, the former mayor of Troy, told the audience of a few hundred gathered around the state Capitol. It didn’t take her long to find out — and sign on.

The right-wing meme is a euphemism for “f— Joe Biden.” It took off after some fans at a NASCAR race in early October at Talladega Superspeedway in Alabama began to chant the expletive directed at President Joe Biden. But Kelli Stavast, an NBC Sports reporter interviewing NASCAR driver Brandon Brown after his victory there, said, “You can hear the chants from the crowd, ‘Let’s Go Brandon!'” (An NBC Sports spokesperson declined to make Stavast available for an interview or comment. Brown did not respond to a request for comment.)

The exchange quickly went viral, with some conservatives claiming it was evidence that major media outlets were intentionally censoring anti-Biden views. Since then, the phrase has become ubiquitous among right-wing crowds — overheard at sporting events and rallies, seen on bumper stickers, Trump campaign merchandise and even some weapons parts. Amazon, Etsy and Ebay are now flooded with all manner of merchandise featuring the phrase.

The phrase even made its way to Congress, when Rep. Bill Posey, R-Fla., last month shouted it on the House floor. Last week, Rep. Jeff Duncan, R-S.C., wore a “Let’s Go Brandon” mask at the Capitol. Senators, governors and other top Republican officials have also used the phrase.

It has spread outside of the political world, too. A “Let’s Go Brandon” song rose to the top of the iTunes chart. Tweets containing “Let’s Go Brandon” were posted nearly 1,800 times in just one hour on Tuesday afternoon, Twitter showed. And a Southwest Airlines pilot was placed under investigation after he reportedly said “Let’s Go Brandon” over a flight’s intercom.

Making obscene remarks about the president is practically an American political pastime. But what makes “Let’s Go Brandon” different, experts say, is that it’s as much about what’s not being said than what is.

The slogan is “a way of saying this ought to be perfectly all right to say, but ‘they’ won’t let us,” Robin Lakoff, professor emeritus of linguistics at the University of California, Berkeley, told NBC News, noting it fits in with broader right-wing themes of silencing and cancellation. “Whoever ‘they’ are. It’s a sort of group-identification thing.”

If anything, vulgarity was a norm during Trump’s tenure — both from his detractors and from the president himself. His closest predecessors, Bill Clinton, George W. Bush and Barack Obama, were all subject to the same types of profanity.

For some Trump backers, his crude language appealed to supporters who liked that he made being “politically incorrect” seem acceptable. These supporters have embraced the latest profanity and the cleaner euphemism in seeking to agitate political opponents — whether or not anyone is actually offended. For others, the expressions come with a caveat that, actually, it’s Trump’s opponents who have said far worse about him and this is just the next round in a tit-for-tat.

“At its core it’s a genuinely funny viral moment of broadcast TV, filtered through a meme culture that shown an affinity for Trump and the MAGA sensibility, and embraced by a party whose highest goal at this point is to trigger the libs,” Liam Donovan, a lobbyist and former Republican operative, wrote in an email.

Lori Galloway, 57, of Purcellville, Virginia, said in an interview at a recent event headlined by former Vice President Mike Pence that she was a fan of the “Let’s Go Brandon” meme because she felt it was being driven by younger, engaged voters.

“As a Christian, I’m not going to blurt it [Let’s Go Brandon] out because I do know what it stands for,” she said, adding while she may not say it, it’s better than other anti-Biden attacks. “It’s not necessarily something that is cutting down on Biden’s character or perhaps the fact that he might not have all his faculties anymore. Because some of the catchphrases that have come out are not very flattering, where as this sort of points to [the issues], not necessarily to the man.”

Justin Gross, an associate professor of political science at the University of Massachusetts, echoed Galloway in explaining why the meme has caught on.

“It’s a way to say the thing that people want to say and that people will actually say, but we can get grandma and the 11-year-old involved, because they’re not saying a naughty word,” he said, adding the ability to place “Let’s Go Brandon” signs in places or businesses where the actual vulgarity would not be allowed has boosted its staying power too.

The meme has coincided with a rise in vulgarity aimed at the president. Last month, Biden was greeted by a homemade “F— Joe Biden” sign during a trip to Scranton, Pennsylvania, while during an earlier trip to a child development center in Hartford, Connecticut, Biden detractors showed up with similar signs to mark his visit.

“The protesters outside the child care center today had a giant ‘F — k Joe Biden’ sign and were chanting the same thing loud enough to make sure all the children could hear it,” tweeted Sen. Chris Murphy, D-Conn., following Biden’s trip to Connecticut. “Just heartbreaking for kids to see how crude and uncivil some of our discourse has become.”

While the increased vulgarity has coincided with Biden’s approval rating sinking to 42 percent in the latest NBC News poll, Republicans say they don’t see “Let’s Go Brandon” being a major part of the 2022 campaign, in which they want to focus on inflation, increased border crossings and the withdrawal from Afghanistan.

One GOP aide called “Let’s Go Brandon” an “annoying boomer meme” that is getting past its due date, adding, “I cringe when I see elected officials saying it.”

“I don’t think it’s particularly offensive but it’s basically like a bumper-sticker joke,” the aide said. “It will probably continue for way too long but I can’t imagine it will be in a campaign or anything like that.”

As Lakoff said, “Let’s Go Brandon” is a signal to likeminded others who are already in the know.

“Usually, when people choose a euphemism, it becomes universalized,” she said. “This is kind of ‘we conservatives, we who hate Joe Biden, we got this.’ And it’s a sort of poke of the thumb in the eye of people who don’t wear my hat.”

Speaking on another topic at the Lansing rally, Daniels made clear how important having shared knowledge of phenomena happening outside of the country’s mainstream is in some conservative circles.

“You know how it is when you get in a crowd and you don’t know anybody else but you’re all talking the same stuff?” she asked. “I like that. I love being in crowds like this where we can all talk about the same things that are concerning each and every one of us and you.”