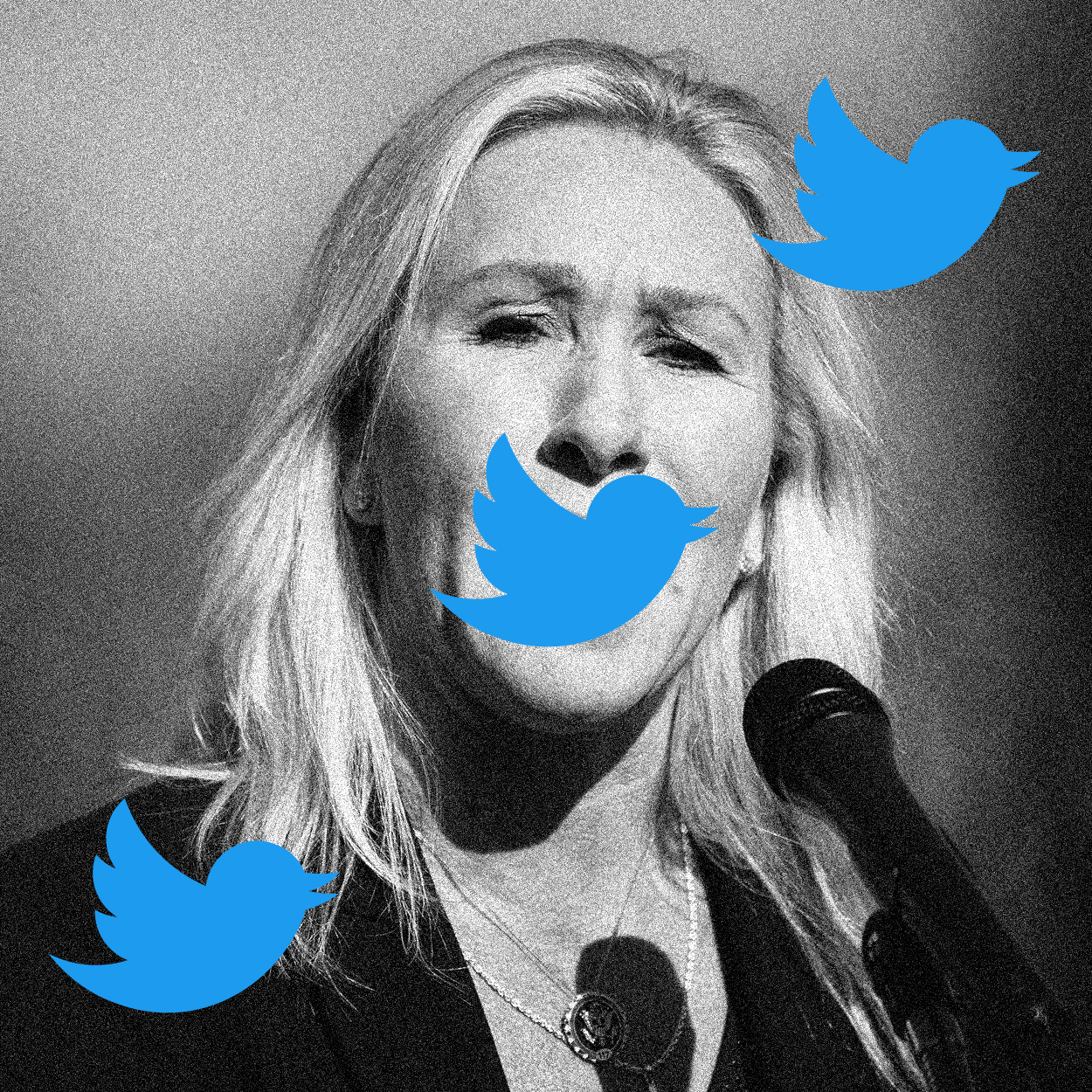 Rep. Marjorie Taylor Greene, R-Ga., will no longer be able to use her personal Twitter feed to add to the garbage pile of nonsense that permeates the internet. The first-term member of Congress got that account “permanently suspended” Sunday, Twitter said in a statement, for “repeated violations of our COVID-19 misinformation policy.”

Greene was a conspiracy theorist par excellence even ahead of her successful run for office, and she was bound to eventually lose access to her account. The real question is whether her fellow Republicans will view Twitter yanking that account as a cautionary tale — or if they’ll view it as a road map to martyrdom.

Twitter had already suspended Greene multiple times for tweeting the kinds of fraudulent claims that have become ambrosia for the Republican Party’s most devoted. “In January last year, Greene was suspended for making false claims about widespread voter fraud in Georgia,” NBC News reported. “She was also suspended in July and August for violating the Covid-19 policy with tweets about vaccines.”

Greene is not ignorant of the lines she crosses. She may not agree with them or give them any particular weight. It may even be possible that Greene believes what she’s saying about the danger of vaccines, adding to her zeal in rejecting the lines Twitter has drawn — but she knows those lines exist. And so, each infraction has been willful. This is the way of the internet troll, her spiritual people, for whom rules exist primarily to be ignored gleefully. It’s this thrill of knowing that what’s being said is taboo that outweighs any need for the statement to be true.

In any case, Greene, at least, has the stomach to stand by her statements, even as her account was purged. That’s more than most of her fellow members of the House GOP are willing to do; they walk the line that she dances over. In this way, they’re worse than the blatant trolls of the world, feigning their own innocence and persecution instead of reveling in the outrage they inspire.

Last week, the Twitter account for the Republican members of the House Judiciary Committee was used by the more “mainstream” members of the caucus to flirt with trolldom. In a now-deleted post, whoever’s in charge of the committee’s account tweeted, “If the booster shots work, why don’t they work?” The word “Covid” is never mentioned — but while it was up, the tweet clearly crossed the line from being in favor of vaccines but in opposition to vaccine mandates into straight anti-vaccine territory.

It’s worth noting that the House Judiciary Committee has no jurisdiction over the efficacy of the vaccine; still, it’s not surprising that the knock against vaccines came from the committee’s Twitter account. The committee’s ranking member is Rep. Jim Jordan, R-Ohio, who, while generally avoiding the plane of alternate reality that Greene exists on, is no stranger to promoting conspiracies and misinformation. The now-deleted tweet appears to be a riff on one from Jordan two days earlier: “If masks and mandates work, why don’t they work?” That same day, the committee account tweeted, “RT if you think every single #COVID19 mandate should be repealed!”

The @JudiciaryGOP account remains active — for now. But it probably won’t be long before it tests that boundary again, like the velociraptors in “Jurassic Park” testing the electric fences that confined them.

By and large, pressing up against the limit works for the intended audience. Many Republicans seem to believe that the outrage they can gin up toward Twitter for actually enforcing boundaries may likely make up for the loss of a platform. Jordan on Monday tweeted a headache-inspiring argument to capitalize on what he insinuated is a grave injustice in Greene’s suspension: Because Greene was banned from Twitter and the Taliban has not been banned, it should be legal to sue Twitter for the content found there. It makes no logical sense, yet it is a message that serves its purpose for its intended recipients.

When Greene was stripped of her committee assignments last year for her earlier claims that school shootings were “false flag” operations and for her other falsehoods, I argued it would have no real effect on her behavior. I don’t think I’ve been proven wrong. Her statement in light of her permaban makes pretty clear that it’s unlikely her behavior will change in this case, either: “Twitter is an enemy to America and can’t handle the truth. That’s fine, I’ll show America we don’t need them and it’s time to defeat our enemies.”

However, I disagree with those who say de-platforming people like Greene is, in fact, a gift that allows them to add more fuel to their ever-burning fires of victimization. It’s simply not true that in striking them down, they become more powerful.

For proof of that, look no further than former President Donald Trump, who has spent the last year desperately trying to find a new addiction that gives him the same thrill as tweeting or a platform that puts more money in his pockets than Facebook. All he’s gotten in the process is a failed blog and an increased reliance on the media to spread his message via news releases. This can’t be encouraging for those who would follow in his footsteps.

Most Republicans know they’re more powerful with the reach social media provides than they are without it. As a result, they’ve so perfected the art of claiming martyrdom that actually becoming a martyr feels entirely too painful and unnecessary. The shadowboxing they do toward Facebook and Twitter is all an act for the fans as they continue to profit from the social media giants’ existences. Case in point is the @JudiciaryGOP account’s retreat from the blatant anti-vaccine stance it briefly flirted with contra Greene’s continued needling.

Instead of giving a masochist what they want, I think removing Greene from Twitter is a case of isolating what would otherwise be a bit of idiocy that would spread unchecked. Greene’s anti-vaccine tweets got her suspended. In her suspension, Twitter is slightly more inoculated against the abuse of facts she gleefully engaged in. It’s almost as though our discourse requires specialized antibodies to help fight off specific strains of viral falsehoods. I hope the representative can see the irony here.