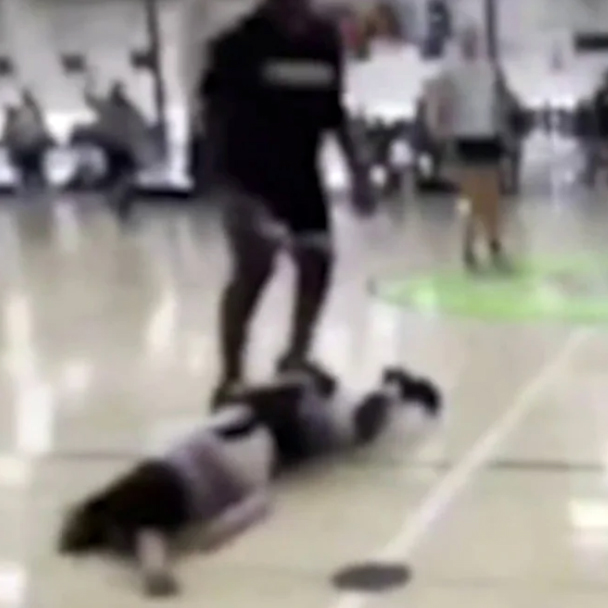 A mother was accused Thursday of telling her teenage daughter to hit another player during a basketball game in Southern California, an act that was widely viewed on social media after it was captured on camera last month and that the other player’s mom said caused a concussion.

Latira Hunt, 44, was charged with two misdemeanors — one count of contributing to the delinquency of a minor and one count of battery, the Orange County District Attorney’s office said in a statement.

“It is unconscionable that a parent would encourage her child to engage in violence during a sporting event,” Orange County District Attorney Todd Spitzer said in a statement. “Youth sports are invaluable in teaching our children discipline, teamwork and sportsmanship. But a win-at-all-costs mentality that is completely devoid of fair play, respect and civility is disgusting.”

The Nov. 7 game between the SoCal Blaze and the Dream Academy was part of a tournament at a facility in Garden Grove, roughly 30 miles south of Los Angeles, NBC Los Angeles reported. In a video of the incident, a 14-year-old player from Dream Academy can be seen trying — and missing — for a 3-point shot, according to the station.

Immediately after, the Dream Academy player can be seen falling to the floor. A player beside her — identified to NBC Los Angeles by her mother, Alice Ham, as Lauryn Ham, 15 — also falls.

After getting back up, the Dream Academy player can be seen lunging toward Lauryn Ham and striking her in the head. She immediately crumpled to the floor.

In Thursday’s statement, Spitzer accused Hunt, who was at the Garden Grove facility watching the game, of telling her daughter: “You better hit her for that.”

After the game, Lauryn was diagnosed with a concussion, Alice Ham told NBC Los Angeles.

In the days after the game, Corey Benjamin, a one-time first-round draft pick for the Chicago Bulls who played for the team from 1998 to 2003, apologized for his daughter, telling NBC Los Angeles in a statement that he was “shocked and disappointed” by her behavior.

“This is not a reflection of the values and standards that my family holds,” he said. “Nor does it exemplify the values, character and spirit of sportsmanship that the game of basketball requires. My daughter made a mistake. One that she will need to make right. I am committed to getting my daughter any help she may need and support her in taking accountability for her conduct.”

A lawyer representing Benjamin’s family, Brett Greenfield, said in an email to NBC News Thursday that “we look forward to seeing the evidence and will address the charges accordingly.”

He added: “In the meantime, nothing is being done to protect the privacy of a minor nor has any protection been offered in the face of multiple unsolicited threats and racist rants directed toward the mother and minor daughter.”

Hunt is scheduled to be arraigned Jan. 26.

Kevin Hahn, a lawyer representing the Hams, said in an email that the family was “pleased” with the charges.

“We believe that this is the correct decision and the first step towa ensuring that there is accountability,” he said. “There is no place in sports for a parent to incite violence against another child. We are hopeful that this will serve to discourage this type of behavior in the future.”