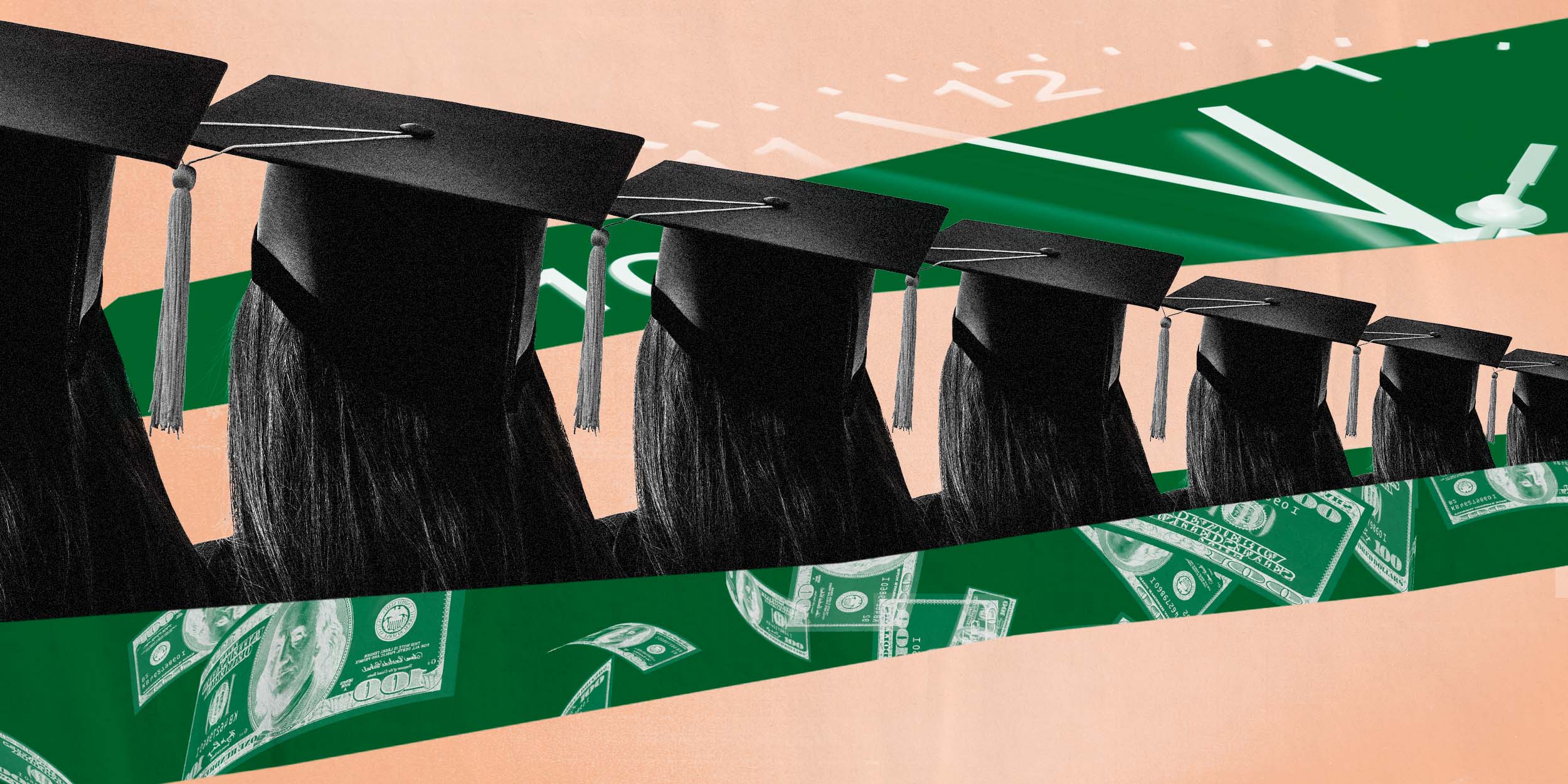 This article about college graduation rates was produced in partnership with The Hechinger Report, a nonprofit, independent news organization focused on inequality and innovation in education.

Millions of freshmen are settling into college this fall, and 9 out of 10 of those pursuing bachelor’s degrees are confident they’ll finish in four years or less.

If history holds true, however, fewer than half of them actually will.

Colleges have gradually moved the finish line to give themselves credit for success if students graduate in six years — or even eight years, which is the measure used by the government’s newest consumer website, College Scorecard.

That’s like judging the success of an airline’s on-time performance by including the percentage of its flights that take up to twice as long as scheduled to reach their destinations.

Researchers, policymakers and journalists have largely unquestioningly used the six-year measure. But now it is attracting new scrutiny as graduation rates stagnate, the Covid-19 pandemic threatens to make them even worse and the Biden administration proposes spending $62 billion to improve completion rates at institutions with large proportions of low-income students.

Related: ​​Why white students are far more likely to graduate than Black students at public universities

While 90 percent of entering students in a nationwide UCLA survey say they’ll graduate within four years — the most basic promise made by a university or college to consumers — only 45 percent of them will.

And fewer than two-thirds of students manage to finish even within six years, the Education Department reported. Completion rates are even worse for particular groups of students. Only about a quarter of Black and a third of Hispanic students graduate within four years, for instance, government figures show.

Asked repeatedly why graduation rates are still measured in increments of six years, whether this causes confusion among students and families, and what impact it has on pushing colleges to improve completion, the Department of Education responded by cutting, pasting and sending the text of the 1990 law with no further comment or elaboration.

“They’re pulling a bait-and-switch on students,” said Yolanda Watson Spiva, president of the advocacy group Complete College America. “I dare say that if you ask any institution what their graduation goals are, they would say four years. Either they’re fooling themselves or they’re not being honest about how the systems they’ve set up work against that. What about turning out your product in the four years that you promised?”

It is possible for consumers to see four-year graduation rates on another Education Department website, College Navigator, but they’re first shown six-year rates. Graduation rates by race, ethnicity and gender are all reported over six and not four years.

Accepting that fewer than half of students at four-year colleges graduate within four years means recognizing that many face significantly higher costs than they expected, while delaying the start of their careers. Some run out of money and give up.

“If a family has a plan, they end up financially unable to get to their goal,” said David Bergeron, a senior fellow at the Center for American Progress and a former acting assistant U.S. secretary of education for postsecondary education.

Students also won’t find out about these long odds from the colleges themselves, and they’d have to dig deep to learn them from the federal agency that regulates higher education.

How the six-year measure came to be

The story of how America came to measure graduation from four-year colleges over six years opens in 1989, when then-Sen. Bill Bradley, who played college and professional basketball, and fellow senators began to scrutinize the academic success of student athletes — many of whom never graduated.

Until then, colleges, universities and the NCAA didn’t disclose their graduation rates at all, and bristled at the prospect that they’d have to. Since athletic eligibility covers five years, the senators proposed making colleges report athletes’ five-year graduation rates. Then they expanded the requirements to all students, not just athletes.

After lobbying by universities and colleges, Sen. Edward M. Kennedy, whose state was rife with higher education institutions, added a last-minute amendment defining completion as earning a degree within “150 percent of ‘normal time.’ ”

The law was passed in 1990, though the colleges managed to put off publicly reporting graduation rates until 1997.

That measurement also creates little incentive for universities and colleges to improve these rates, which started to plateau even before the disruptions of Covid. The proportion of students who finished within six years grew by only three-tenths of a percentage point in 2020, the smallest increase in five years, according to the National Student Clearinghouse Research Center.

Students can prolong their stays in college by arriving unprepared, taking too few credits per semester, working while in school, changing majors, running out of money or taking time off for family obligations and other reasons. Colleges and universities can slow them down by piling on additional requirements, failing to provide enough sections of required courses, offering inadequate advising and being stingy about accepting transfer credits.

“Our expectation should be a four-year degree in four years,” Bergeron said. “Why do we set this expectation of six years, which just causes people to think it’s OK to make excuses for not getting it done in four? If we think it should take six years, isn’t it going to take six years?”

Some student advocates have a different problem with the way that graduation rates are tabulated: that growing numbers of students are pursuing higher education in dramatically new ways that don’t follow a traditional timetable.

“Who are we measuring this for, and to what end?” asked Peter Smith, a former congressman, the author of “Stories from the Educational Underground: The New Frontier for Learning and Work” and a professor of innovative practices in higher education at the University of Maryland Global Campus.

“What we should admit is that a four-year completion rate, where it works, is working for a limited number of students,” Smith said. “The mainstream model is shifting to truly lifelong in-and-out, come-and-go education. And for some people that is four years or two years.”

But for most people, he said, it’s not. That means it’s time to find new ways of measuring success.

“The counting system we have — six years, eight years,” Smith said, “is really telling us about how the traditional system is unable to meet these changing aspirations.”