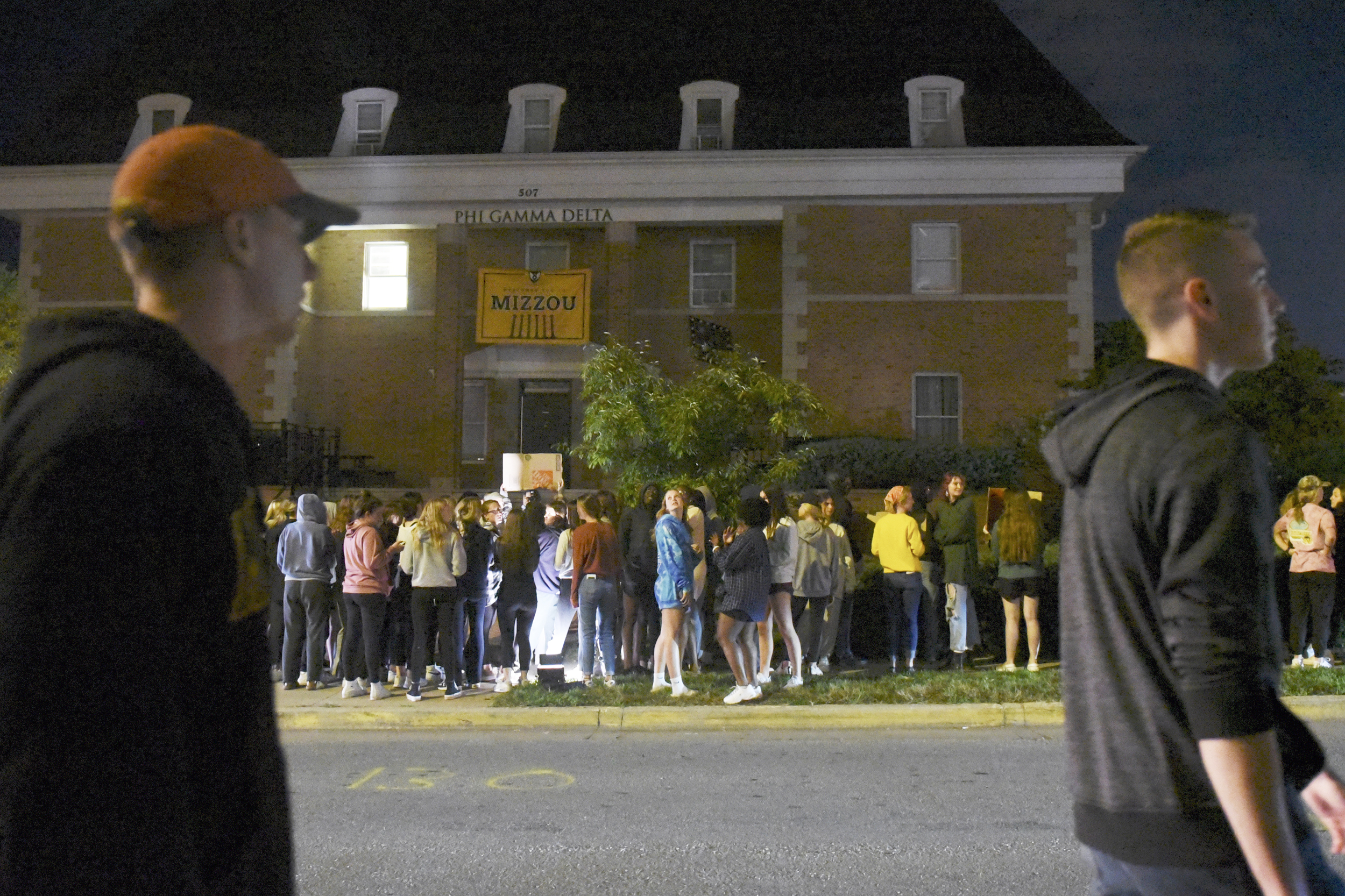 The family of a 19-year-old University of Missouri student left with permanent brain damage after being forced to drink a bottle of vodka at a fraternity party and dropped on the floor while unconscious is seeking damages from two more students allegedly involved in the hazing.

The family of Daniel Santulli on Wednesday named Alec Wetzler and Samuel Gandhi as defendants in a civil lawsuit originally filed against 22 students and the Phi Gamma Delta fraternity that was settled last month. The terms of the settlement were not made public.

Santulli was an 18-year-old freshman when he attended a pledge event called “Pledge Dad Reveal Night” last October at Phi Gamma Delta fraternity, where he was pressured to drink an entire bottle of Tito’s vodka according to video from a surveillance camera in the fraternity house. The video also showed members of the fraternity pouring beer down Santulli’s throat through a tube and a funnel while he was part of the way through the bottle of vodka.

Each fraternity “family” had its own signature alcohol, and Santulli’s “family bottle” was Tito’s, said David Bianchi, an attorney for Santulli’s real family, adding that each participant was told to finish the drink in two hours.

By 10:55 that night, Santulli was unable to stand, and fraternity members carried him to a couch, where he lay for over 1½ hours until members tried to carry him out to a car but dropped him on his head, according to the surveillance footage.

By the time they got him to University Hospital, Santulli was in cardiac arrest and not breathing. He had a blood alcohol level of .486, according to the Columbia Missourian.

Santulli remains blind and unable to walk or talk because of the damage to his brain, and doctors have told his family he will need special care for the rest of his life.

Although a settlement was reached with the 22 students and the fraternity on May 10, the family decided to name Wetzler and Gandhi as additional defendants after the full police report and surveillance footage were made available to them, Bianchi said.

According to the lawsuit filed by the Santulli family, Wetzler allegedly poured the beer down the tube in Santulli’s throat, and Gandhi allegedly abandoned an intoxicated Santulli after momentarily trying to assist him.

Wetzler’s attorney declined to comment Friday, and it was unclear whether Gandhi has retained legal counsel.

“They knew he was in distress, and his lips were blue, and nobody called 911,” said Santulli’s mother, Mary Pat Santulli, in an interview Thursday on ABC News’ “Good Morning America.” “It’s like, I don’t know, I mean a 6-year-old calls 911.”

Wetzler was charged on June 2 by the Boone County Prosecuting Attorney’s Office with two misdemeanor counts of possession of alcohol by a minor and providing alcohol to a minor, but neither he nor any other fraternity members have been criminally charged with hazing.

Bianchi said in his opinion the fraternity members’ actions the night of Oct. 19 fit the legal definition of hazing under state law, which includes the forced consumption of alcohol and “recklessly endangering” the mental or physical health of a student.

“This is textbook hazing. It’s not debatable. You can go to jail for up to one year,” Bianchi said. “And no charges have been filed against anybody, which is totally mystifying. It’s inexcusable that the prosecutor is choosing to ignore this law and not enforce it.”

The Boone County Office of the Prosecuting Attorney could not be reached for comment Friday.

Santulli’s sister, Meredith Santulli, told “Good Morning America,” “It makes me sick to my stomach seeing the people involved — that harmed Danny — walking around campus, acting like they did nothing wrong.”

Both the University of Missouri and Phi Gamma Delta International shut down the chapter after the incident, and the university imposed disciplinary sanctions on 13 of the students found to have been involved after an internal university investigation.

“Our thoughts and prayers continue to be with Danny and the Santulli family,” Rob Caudill, executive director of Phi Gamma Delta’s International Fraternity, said in a statement after the incident. “Danny should not have been put in such a situation.”

Thirteen days before the fraternity event, sanctions had been leveled against Phi Gamma Delta by the university for the distribution of alcohol and the violation of university policies at an Aug. 24, 2021, event. The sanctions included banning Phi Gamma Delta from hosting events that featured alcohol until Feb. 1. Sanctions had also been imposed in May 2021 for hazing incidents.

“Safety of the Mizzou community is our highest priority, and we must address alcohol use and other concerns in holistic ways to provide education and services that work together to support safer behavior and an overall culture,” university president Mun Choi said in a statement May 5.

Bianchi said Friday, “Obviously, university sanctions don’t work, because these guys don’t care. So you’ve got to go after it a different way.”

He said Santulli’s family has just moved Daniel home, and they are trying to take care of him on their own.

“He’s in a wheelchair. He lost his vision. But he hears us, and he knows we’re there.”