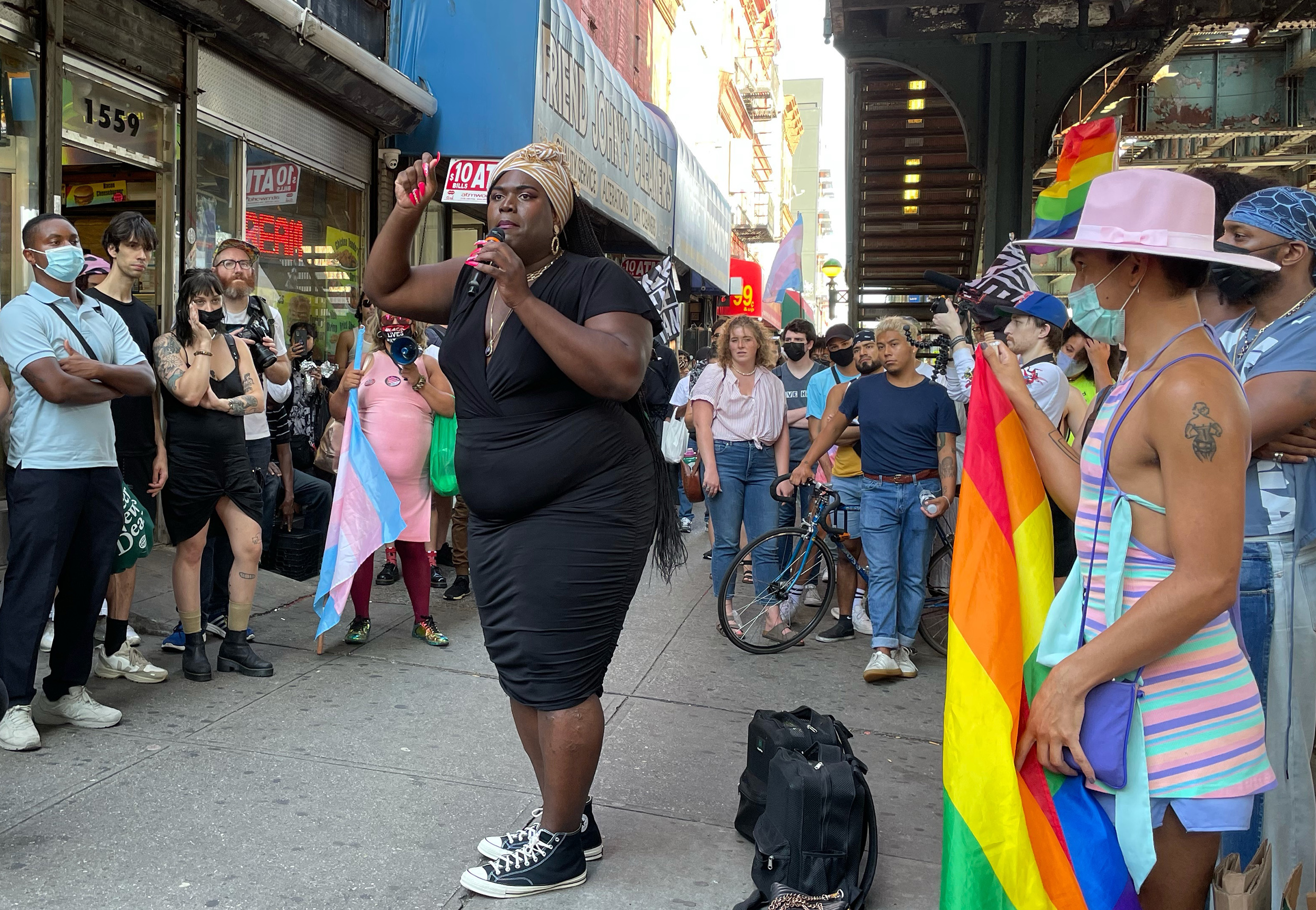 Demonstrators marched Wednesday in Brooklyn, New York, for two men who were stabbed with a glass bottle and a screwdriver in an attack police said they are investigating as an anti-gay hate crime.

The protest took place outside a bodega at 1559 Broadway, where the men, Abimbola Adelaja, 36, and a friend, 28, were called anti-gay slurs, assaulted and robbed.

They had gone to the bodega to buy sandwiches at 2:10 a.m. Saturday when three men approached and a verbal dispute occurred. The men assaulted the two victims, striking them with a glass bottle and a screwdriver, police said. The victims’ phones and cash were taken, and one of the assailants restrained Adelaja’s friend and made anti-gay statements. The friend asked Adelaja not to publicly identify him.

The attackers eventually fled, leaving Adelaja with a puncture wound to his chin and a laceration to his lips, police said.

The other victim was treated for a laceration to his right hand and shoulder.

Both were stable Wednesday, and the police department’s hate crimes task force is investigating.

Adelaja, who identifies as gay, said he and his friend, who recently moved to the area and remains in the hospital, were scared for their lives.

“I’m still physically and mentally trying to get better,” he said.

After he was attacked, Adelaja ran into the bodega’s storage room, where he hid while the bodega workers kicked everyone outside. That is where his friend was stabbed seven times, he said.

When Adelaja left the room, he asked the workers for help, but they did not let him borrow their phones to call 911 and were adamant that he leave, he claimed.

He then ran toward his apartment but was unable to open the door, so he flagged a passing ambulance and soon learned that his lung had collapsed, he said. At the hospital, Adelaja decided to voluntarily discharge himself against a doctor’s advice because he was afraid of contracting Covid-19, he said.

Adelaja, a local activist and organizer, said he was disappointed that workers at a bodega he frequents refused to help him.

“If someone is in need, you help,” he said. “I wasn’t expecting them to get involved or jump in, but certainly, you know, getting the phone or calling the cops for me or making sure I was OK are all things that could have been done.”

The owner of the bodega, named Borhan Food Market Corp., did not immediately respond to emailed requests for comment.

Adelaja, who has been publicizing the march on social media since the attack, credited his “trans sisters,” such as the founder of Black Trans Liberation, Qween Jean, with helping him organize the march, which he said was aimed at holding the bodega accountable and creating a safe space for the LGBTQ community in the Bushwick neighborhood of Brooklyn.

“We won’t let something like this make us scared. We won’t live in fear,” he said. “We’re here, we’re proud people, so we want to hold space to let the community know we’re here, and we’re going to stand up for ourselves.”

Police asked anyone with information about the incident to call the Crime Stoppers Hotline at 1-800-577-TIPS (8477) or 1-888-57-PISTA (74782) in Spanish. People can also submit tips on Twitter or by logging on to the Crime Stoppers website.