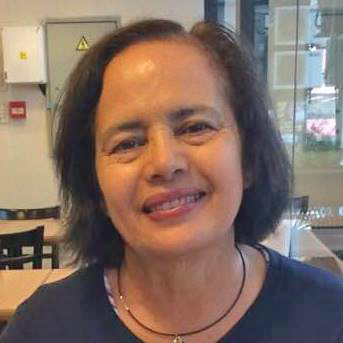 Claire Epperson last saw Nohema Graber, a Spanish teacher at her alma mater, Fairfield High School in Iowa, when she was home from college a week ago to watch her younger sister in the school play.

Graber, known for dutifully attending nearly every school event, spotted Epperson during the intermission and asked her how she was doing at Drake University in Des Moines.

“I told her it was going well. She said she wasn’t surprised at all and encouraged me to take a Spanish class or two if I could,” Epperson recalled Friday. “I’m so glad I was able to have that conversation with her. Of course, at the time, I didn’t know it would be my last.”

Epperson and her community of Fairfield, about 100 miles southeast of Des Moines, are reeling after police said Graber, 66, was found dead Wednesday in a local park where she was known to go walking. A criminal complaint obtained Friday by NBC News indicated her body was “concealed under a tarp, wheelbarrow, and railroad ties” and that she suffered trauma to the head.

The brutal act against such a beloved teacher, one who had been at the high school for nearly a decade, grew even more confounding when authorities announced an arrest in the case: two 16-year-old students who attend Fairfield.

“I absolutely cannot comprehend why any student would ever want to hurt her,” Alyson Reid, a former student, said.

She wondered if it might have been racially motivated. Graber, who was born in Mexico, was a liaison between St. Mary Catholic Church in Fairfield, where she frequented Mass, and the town’s growing Latino enclave.

“While Mrs. Graber was bilingual and fluent in English, she did struggle with slang and had an accent,” Reid said. “I know some students made fun of her for that.”

Investigators have not provided a motive for Graber’s killing but said in a criminal complaint that details were shared among the suspects regarding her execution and the concealing of the crime.

The Jefferson County Attorney’s Office said the ongoing investigation has not found any evidence so far that her killing was racially motivated.

The teenagers were charged as adults with first-degree homicide and first-degree conspiracy to commit homicide. Both were being held in lieu of $1 million bail and were awaiting a court hearing next week.

NBC News does not usually name minors charged with crimes, even those charged as adults.

For those who knew Graber, they said it was important to focus on how she lived and the journey she took to find her passion: first as a young flight attendant in Mexico who immigrated to the United States, raising two sons and a daughter, and later in life, deciding she wanted to become a teacher.

“To know Nohema was to love her — she was the kind of person every community longs to have in its midst and we were blessed to have her in our lives,” the Graber family said in a statement Friday. “She lived for her children, her family and her faith.”

Her daughter, Nohema Marie, wrote in a Facebook post that it “is all thanks to her for instilling a love of travel and languages that my brothers and I have continued to experience the world throughout our lives.”

Graber’s ex-husband, Paul Graber, told the Des Moines Register that she was in her 50s when she earned a degree in English and a teaching certificate from Iowa Wesleyan University.

Spanish teachers were in demand, particularly native speakers like herself.

While Fairfield, with a population of about 10,400 and known for its stately Victorian homes, was a far cry from the bustle of Mexico City, where the family had lived, Graber learned to adapt.

Beatriz McCoy, a flight attendant with Mexicana de Aviación, the country’s flagship airline before it folded in 2010, had worked with Graber in the 1970s. After McCoy moved to the United States herself, settling in California in 1998, she would occasionally call her friend.

“We talked about the struggles we had in the United States, first being a woman and also being Mexican,” McCoy said. “Sometimes, it was difficult.”

But their conversations usually centered on family and their younger, globetrotting days. McCoy, during her first year as a flight attendant, learned the ropes from Graber, who had about two years of experience on her. Graber, her striped uniform perfectly crisp, was always smiling.

“We were taught how to handle very difficult people,” McCoy said. “But she could get along with everybody.”

Epperson, who played the clarinet in band, said Graber would make those who performed in the school concert get up in class and ask the other students to “clap on them!”

During homecoming week, when students and staff were encouraged to dress up in pajamas for fun, Graber would throw on cat slippers and giggle as she made everyone admire them.

“Her joy was contagious,” Epperson said. “She was the purest soul I could imagine and genuinely cared more about her students with her whole heart. I know that a lot of people are going to look at this case and remember the horrible details, but I want anyone who didn’t know her to know that she was quite literally an angel on Earth.”

Another former student, Emma Carlson, recalled how Graber would endearingly call her students chamacos, or “kids” in Spanish.

After every prom night, Carlson said, she would demand to see photos the next day of the students in their dresses and tuxedos, so she could shower them with praise.

When Carlson won a poetry award, Graber had Carlson read the poem in front of the class.

“Though my voice shook, and the poem itself was not all that great, she clasped her tiny hands once I was done and breathed out an amazed, ‘Wow, Emma,'” Carlson said.

Another former student, Mira Pappin, said Graber nurtured her love of art and would ask her to sign illustrations for her “for when we were famous one day.” After learning of her teacher’s death, Pappin mourned the way she knew how: by drawing her.

Carlson said Graber believed in her students so deeply that to lose her in such a senseless way was difficult to grasp.

“I can’t put into words how much that hurts,” Carlson said. “We lost the very best of us.”