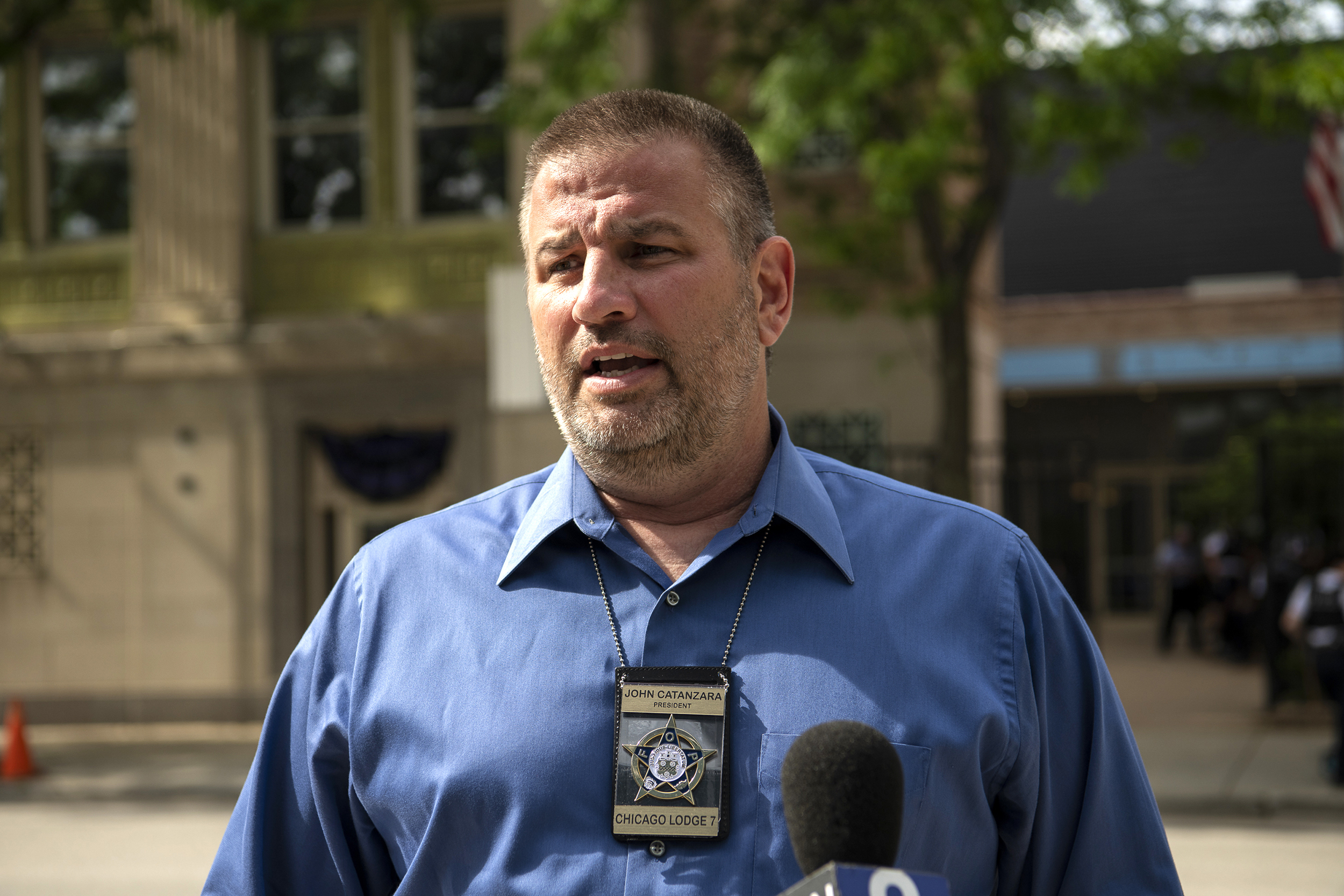 Hours after the Food and Drug Administration fully approved the Pfizer-BioNTech vaccine Monday, Chicago Mayor Lori Lightfoot made an emphatic declaration: “City employees are absolutely going to be required to be vaccinated.”

“We absolutely have to have a vaccine mandate,” she said. “It’s for the safety of all involved, particularly members of the public who are interacting with city employees on a daily basis.”

The same day, John Catanzara, the president of Chicago’s Fraternal Order of Police, which represents the city’s rank-and-file officers, made it clear that he did not intend to comply.

“It cannot be mandated,” he told the Chicago Sun Times. “It’s that simple.”

“Our members don’t want to be mandated to do anything like that,” said Catanzara, who did not return multiple phone and email requests for an interview this week.

The battle brewing in Chicagois playing out in cities and towns across the country. Police unions in Tulsa, Oklahoma; Seattle; and Syracuse, New York, have pushed back against vaccination requirements, as has the union representing state police in Massachusetts.

This week, just days after New York Mayor Bill de Blasio said Education Department employees must receive at least one dose of a coronavirus vaccine by Sept. 27, the city’s largest police union told its members in an email that it would take legal action to defend their “right to make such personal medical decisions” if they faced the same requirement.

A union spokesman on Thursday confirmed the contents of the email, which was first reported by the New York Post. The spokesman declined to comment about why officers are reluctant to get vaccinated.

In defending his members’ right to violate Chicago’s mandate, which takes effect Oct. 15, Catanzara made false claims about the vaccines’ safety.

“This vaccine has no studies for long-term side effects or consequences,” he told the Sun Times. “None. To mandate anybody to get that vaccine, without that data as a baseline, amongst other issues, is a ‘hell no’ for us.”

Reluctance among officers — front-line workers whose jobs often involve extensive community contact — to get vaccinated has raised public health concerns. An outbreak of the highly contagious delta variant in a police force could also pose a risk to public safety.

“The delta variant is not like previous Covid lineages, and unvaccinated people in their 20s, 30s, 40s or 50s — meaning the ages that people are in law enforcement — are going into hospitals,” said Dr. Peter Hotez, dean of the National School of Tropical Medicine at Baylor College of Medicine and a co-director of the Texas Children’s Hospital Center for Vaccine Development.

He said Catanzara’s public statements about vaccines and the low vaccination rates among officers are harmful.

“It’s really unfortunate that a number of law enforcement are going to lose their lives because of irresponsible statements like that,” Hotez said.

While it is not clear what percentage of officers across the country have been vaccinated against the coronavirus, vaccination rates for two of the country’s largest departments are below the national rate.

Chicago, which has the country’s second-largest force, does not track vaccinations. In Los Angeles, which has the third-largest department, 47 percent of employees had been vaccinated as of Monday.

A police spokesman said last Friday that 47 percent of New York’s uniformed and civilian employees had been vaccinated.

Hotez said that “if you look at New York, in terms of vaccination rates,” 79 percent of residents 18 and older have gotten at least one dose of a vaccine. That means members of the police department are more vaccine-hesitant than the general population, he said.

The New York Police Department warned officers last week that it would discipline unvaccinated personnel who do not wear masks on duty. De Blasio announced last month that all city employees must get vaccinations by Sept. 13 or face weekly testing.

Detective Sophia Mason, a spokesperson for the department, said in a statement last Friday: “Since vaccines became available we have encouraged our employees, especially those who have contact with the public, to get vaccinated. We continue to make vaccinations available at multiple times and at multiple locations to ensure that as many of our employees as possible get the vaccination.”

She said 60 members of the service had died from conditions related to Covid-19 as of last Friday afternoon.

Police Commissioner Dermot Shea said Tuesday that he was “100 percent” behind a vaccination requirement and that a mandate should come from the state or federal levels. (He said medical exemptions should be allowed.)

“We’ve trusted vaccines in this country for decades,” he told the local cable news station NY1. “It has eradicated really serious diseases before. We’re well into that point right now.”

Shea said that the department lost three members last week, two of them to Covid-19, and that he believed everyone across the country “should be embracing” the vaccines. He said it was “great news” that the Pfizer vaccine had received full FDA approval.

“There’s just so much unnecessary loss, in my opinion, right now,” he said. “We lost somebody last week that was an extremely healthy man that had at one point in his career not gotten sick for 17 years. Think about that: Never called in sick in 17 years, and we lost him.”

Brian Higgins, a former police chief and director of public safety in Bergen County, New Jersey, said he is unsure whether law enforcement officers are more resistant to the vaccines compared to people in other professions. He said there has been a lot of attention on police, particularly in the last few years, especially in connection to police and community relations.

Higgins, an adjunct professor at John Jay College of Criminal Justice, part of the City University of New York, said police officers are not used to being told what to do, which might contribute to lower-than-average vaccination rates among officers.

“But, at the same time, many police organizations are still paramilitary organizations, and officers take their orders,” Higgins said. “There’s a lot of cops who probably took it reluctantly.”

Higgins, a former officer, said he has been vaccinated because he “saw the bigger picture” of those he might infect. He also attributed some of the law enforcement hesitance to mistrust of the government.

“We give cops bulletproof vests because they might get shot at. And we give them guns to protect themselves and others,” he said. “And we give them the authority to use force, including deadly force.”

For those reasons, he said, he does not believe vaccination mandates were unreasonable.

Higgins recalled some police unions that opposed their members’ being required to wear bulletproof vests, which he said “were nothing like they are today,” when he was an officer in the 1980s.

“They were really thick,” he said. “When you took them up, they stood upright. They were very hard, very uncomfortable.”

And some police unions pushed back against mandates that law enforcement officers wear them, he said, even though they were intended to protect them.

Unions like the ones in Chicago and New York City want to appear as if they are defending their members, Higgins said.

He said he suspects the percentage of vaccinated law enforcements officers could be higher than has been reported because he believes some officers have been vaccinated but “just don’t want to tell anybody” and “don’t like being forced to do it.”

Hotez and Higgins said they were unsure how effective mandates would be. They said they believe they would encourage some people to get vaccinated but not many.

Higgins said other approaches could boost vaccination rates. For example, if vaccinated officers contract the virus on duty, they should not have to use sick time to recover, he said. On the flip side, he said, for officers who choose not to get vaccinated and who contract the coronavirus while working, there should be implications for their use of sick time.

“There are ways to step away from forcing,” he said. “Maybe there’s some other benefit we can give them. It doesn’t always have to be financial. It could be a day off.”

Hotez said there is also an obvious political component to the vaccine hesitancy.

Catanzara, an avid supporter of former President Donald Trump, has said other unions representing sergeants, lieutenants and captains “stood united and firm in their position against any mandate.”

“And if we look at the highest-refusing groups, it’s Republicans and Trump supporters,” he said. “I think that’s likely the basis for it.”

Trump was booed at a rally in Alabama last week after he told his supporters they should get vaccinated.

“It’s the holdouts from conservative groups and the holdouts on the far political right who are hardest to reach,” Hotez said. Such groups tend to get information about the vaccines from what he described as “disinformation news outlets,” such as Newsmax and Fox News, which have downplayed the dangers of Covid-19, as well as from public officials who provide anti-vaccination messaging.

“What they’re doing is tuning in to disinformation networks,” he said. “They’re creating these tribal calls that vaccines are somehow political instruments of control. They’re basically in their own bubble and parallel universe of disinformation, and it’s hard to reach them.”

He added: “People with strongly conservative leanings are not connecting with mainstream media.”

Hotez said elected officials have to be careful not to enact policies that prompt large-scale resignations that lead to workforce shortages.

“We need the leadership of law enforcement to recognize that this is a dire public health crisis,” Hotez said. “If they really do care about the health and welfare of law enforcement, they need to stop with the political pandering.”