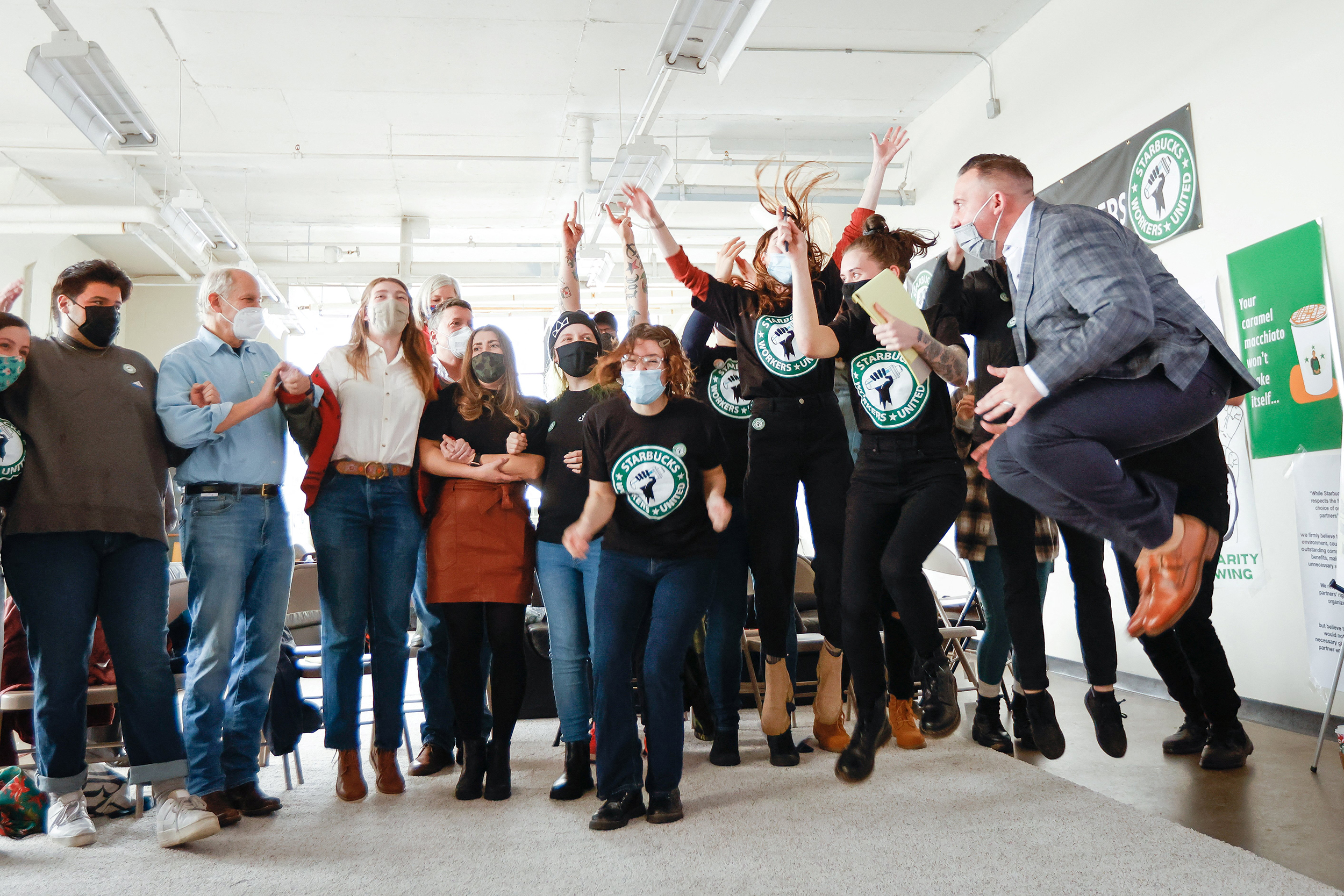 Labor organizers say the unionization of a Starbucks store in Buffalo, New York, could be “the tip of the iceberg.”

“The pandemic has laid bare the typical lip service that workers get,” said Christian Sweeney, deputy organizing director of the AFL-CIO labor union. “There’s been lots of praise for people doing grunt work,” but few worker gains, he said.

Across the country, a new momentum appears to be gathering for increased worker power and rights. Employers are clamoring for workers as many hang back for health or child care issues, or because their time apart has given them a chance to reflect on what they want out of life. Historic levels of job openings have stiffened workers’ spines as they feel more confident than they have in years, quitting jobs at historic levels, in what is being termed “The Great Resignation,” and demanding higher wages and benefits.

In 2020, the number of strikes and work stoppages fell to historic lows. For 2021, there have been 346 so far, according to the Cornell University Labor Action Tracker. John Deere workers struck for a month starting in October over a new contract, while Kellogg workers are still on strike. Health care workers in California struck as one-third of state hospitals experienced staffing shortages, and Nabisco workers went on strike.

A union drive at an Amazon warehouse in Bessemer, Alabama, was defeated earlier this year, but in late November the regional office of the National Labor Relations Board ordered a new election after a hearing officer found that the e-commerce giant had illegally discouraged organizing. On Thursday, 17,000 student researchers at the University of California, San Diego, won the right to be recognized as a union represented by the UAW.

Starbucks Workers United, an affiliate of the Service Employees International Union, may also have energy to spark more organizing elsewhere. Starbucks workers in Mesa, Arizona, have also sent a letter to the company petitioning for a union election.

After plunging to a historic low in 2009 at the height of the Great Recession, Americans’ support for unions is now around 68 percent, according to Gallup polling, a level not seen since 1965.

Unions aren’t just for blue collar factory workers or public service employees any more. Organizing attempts have succeeded or been attempted at digital and legacy media organizations in recent years.

“It’s a generational issue. For these workers, they’re poor people. They work at Starbucks. They have second jobs or are in school with debt. Almost none of them have any hope for owning a home,” said Richard Bensinger, an experienced organizer who assisted with the Starbucks unionization effort.

The role of unions has been a hotly debated and politicized issue for years. Some labor economists see unions as creating market inefficiencies by effectively monopolizing and withholding labor in order to raise wages above competitive levels, according to the Federal Reserve Bank of Minneapolis.

But, in circumstances where companies have excessive control over market structure, unions have a positive impact overall, according to the bank’s report.

“In special cases — for example in a “company town” where labor mobility is restricted and there are just one or two employers — a labor union can counteract the monopsony power of the employer(s), resulting in more efficient resource allocation and a net benefit to society.”

The pandemic has made clear there is a profound power imbalance between employers and employees, said Heidi Shierholz, president of the Economic Policy Institute, a nonprofit think tank.

“Rising inequality and stagnant wages for working people for most of the last four decades, corporate profits going like gangbusters and billionaires’ fortunes going up by billions in the middle of pandemic has underscored that this is an economy not working for everyone,” Shierholz said.

Billionaires’ fortunes going up by billions in the middle of pandemic has underscored that this is an economy not working for everybody.

“These are extraordinary circumstances. We’re in the aftermath of a Covid recession and we’re still in a pandemic. People are watching workers literally die because of unsafe workplaces,” she said.

On Friday, President Joe Biden, who was outspoken in his pro-union beliefs during his election campaign, added his voice to the chorus, sending out a statement in support of striking Kellogg workers.

He spoke specifically to reports that Kellogg would permanently replace striking workers during collective bargaining, but he also expressed backing for union workers more broadly, acknowledging “the critical role collective bargaining plays in providing workers a voice and the opportunity to improve their lives while contributing fully to their employer’s success.”

“Unions built the middle class of this country,” Biden said in the statement. “My unyielding support for unions includes support for collective bargaining, and I will aggressively defend both.”

“It could inspire other workers on the fence to go for it. More unions equals better wages for all,” said Tia Yammie, a unionized service industry worker from California.

“Why is there growing support for unions? Because workers are tired of low wages, no benefits, and lack of protection. Waiting for someone to hand workers a living wage, job protections hasn’t worked, the time to demand it and get it is now.”