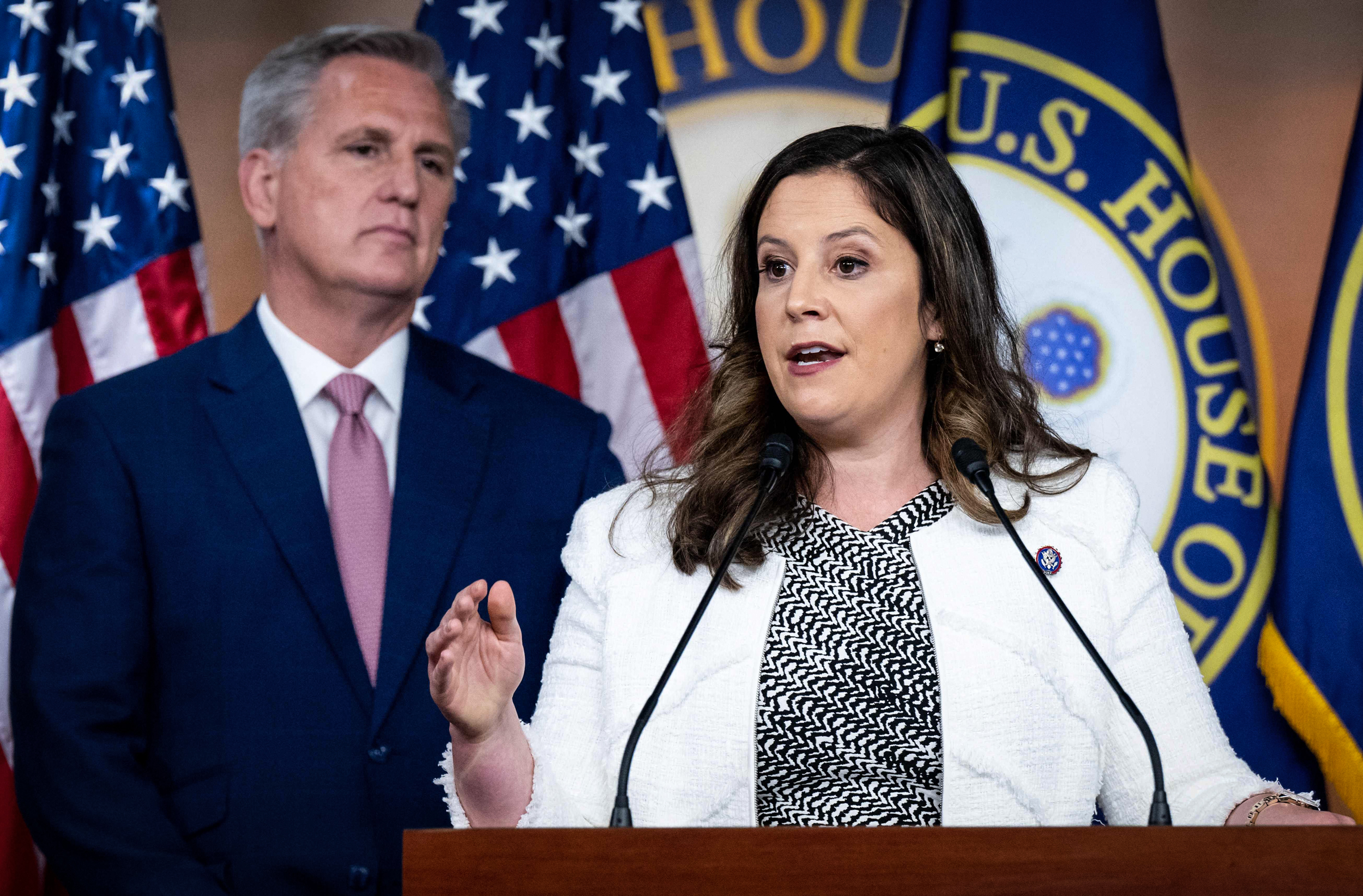 Rep. Elise Stefanik, the No. 3 Republican in the House, rankled fellow House GOP leaders when she backed a New York congressional candidate with a history of controversial and racist remarks, two sources told NBC News.

Stefanik, R-N.Y., endorsed Carl Paladino, a Buffalo developer, earlier this month without consulting other members of a leadership team that includes House Speaker Kevin McCarthy, R-Calif., and House Minority Whip Steve Scalise, R-La., a House GOP leadership aide said, speaking on condition of anonymity because they were not authorized to comment publicly on the matter.

A House Republican familiar with GOP leadership’s frustration with Stefanik who also spoke on condition of anonymity called her endorsement of Paladino “baffling” and “off-putting.”

Paladino made headlines in recent weeks for suggesting on Facebook that recent mass shootings were “false flag” operations and for a 2021 interview in which he said Adolf Hitler was the “kind of leader we need today,” with news articles pointing out his connection to Stefanik, the House Republican Conference Chair. The sources said the appearance of a connection between Paladino and House leadership frustrated fellow top Republicans.

“When you’re in that number three position, when you’re in leadership, anything you say is something that’s going to be interpreted as on behalf of the team,” the House leadership aide said, adding, “This is the reason we got rid of Liz Cheney. And now Elise is doing the same thing.”

Republicans ousted Rep. Liz Cheney, R-Wyo., from leadership and replaced her with Stefanik last year after Cheney, who voted to impeach then-President Donald Trump for his role in the Capitol riot, continued to publicly rebuke him for promoting false claims about the 2020 election.

Stefanik’s campaign and office declined to comment. Representatives for McCarthy, Scalise and the National Republican Congressional Committee did not respond to requests for comment.

A senior Republican who was not authorized to speak on the subject pointed to Stefanik’s endorsement record this cycle, noting “a majority of her endorsed candidates are winning, predicting that Nick Langworthy, the state GOP chair who is also seeking to represent the 23rd District, will suffer “a huge embarrassing loss” to Paladino in the August 23 primary.

“Republicans running for leadership would be very smart to make Carl an ally, as he will be a member come January 2023,” this person said.

It’s not uncommon for members of leadership to endorse candidates on their own.

Stefanik endorsed Paladino, an early Trump backer in 2016, almost immediately following GOP Rep. Chris Jacobs’ announcement that he would not seek re-election in New York’s 23rd Congressional District after he voiced support for a federal ban on so-called assault weapons. In her endorsement, Stefanik described Paladino as “a job creator and conservative outsider who will be a tireless fighter for the people of New York in our fight to put America First to save the country.”

Soon after her endorsement, Paladino sparked backlash for a post shared on his Facebook claiming recent mass shootings in Uvalde, Texas and Buffalo were “false flag” operations. Then, audio of a 2021 interview Paladino gave to WBEN in Buffalo was unearthed in which he said Adolf Hitler was “the kind of leader we need today.”

“I was thinking the other day about somebody had mentioned on the radio Adolf Hitler and how he aroused the crowds. And he would get up there screaming these epithets and these people were just — they were hypnotized by him,” Paladino said in a radio clip shared by the left-leaning group Media Matters for America. “I guess, I guess that’s the kind of leader we need today. We need somebody inspirational. We need somebody that is a doer, has been there and done it.”

Paladino said in a statement that the remarks were a “serious mistake,” but argued they were not in proper context.

“Any implication that I support Hitler or any of the sick and disgusting actions of the Nazi regime is a new low for the media,” he said. “The context of my statement was in regards to something I heard on the radio from someone else and was repeating, I understand that invoking Hitler in any context is a serious mistake and rightfully upsets people. I strongly condemn the murderous atrocities committed against the Jewish people by Hitler and the Nazis.”

A Stefanik spokesperson said in a statement at the time that the congresswoman “has one of the strongest records in the US Congress condemning anti-Semitism and led and passed bipartisan legislation to expand Holocaust education.”

Paladino has a history of controversial or racist remarks. Last week, CNN published audio of Paladino telling a radio host in 2016 that Black Americans were kept “dumb and hungry” so as to only vote for Democrats, adding, “You can’t teach them differently.” That same year, Paladino, then a member of the Buffalo Board of Education, made racist remarks about then-first lady Michelle Obama being “let loose in the outback of Zimbabwe where she lives comfortably in a cave with Maxie, the gorilla.”

Paladino claimed CNN had taken him out of context. After his 2016 remarks about the Obamas, in which he also said he wished then-President Barack Obama would die of mad cow disease after having sex with a cow, he said he “could not have made a worse choice in the words I used to express my feelings.”

Stefanik’s endorsement of Paladino appears to stem from a growing feud between her and Langworthy, Politico reported this week.

Speaking with The New York Post earlier this month, Langworthy said Stefanik was backing Paladino because of a “vendetta” after the state party backed Rep. Lee Zeldin, R-N.Y., in his gubernatorial bid vs. Gov. Kathy Hochul rather than a potential challenge by Stefanik.

However, Politico reported, Langworthy has irked some state Republicans who believe it’s a conflict of interest for him to run for Jacobs’ seat after encouraging him, as state chairman, not to seek re-election. Others see it as a conflict broadly to run for the seat while continuing to serve as state party chair.

“I think he needs to step down as chairman — period,” Sue McNeil, the GOP chairwoman in Fulton County, New York, told The New York Post. Additionally, three of four GOP candidates for governor called on him to step down at a debate this week — with Zeldin being the lone exception.

McCarthy, meanwhile, has faced criticism from former President Donald Trump over a lack of Republican representation on the House Select Committee investigating the Capitol riot. Trump told a conservative radio host he has not yet decided on backing McCarthy in a possible bid for House speaker should Republicans reclaim control of the chamber in November.