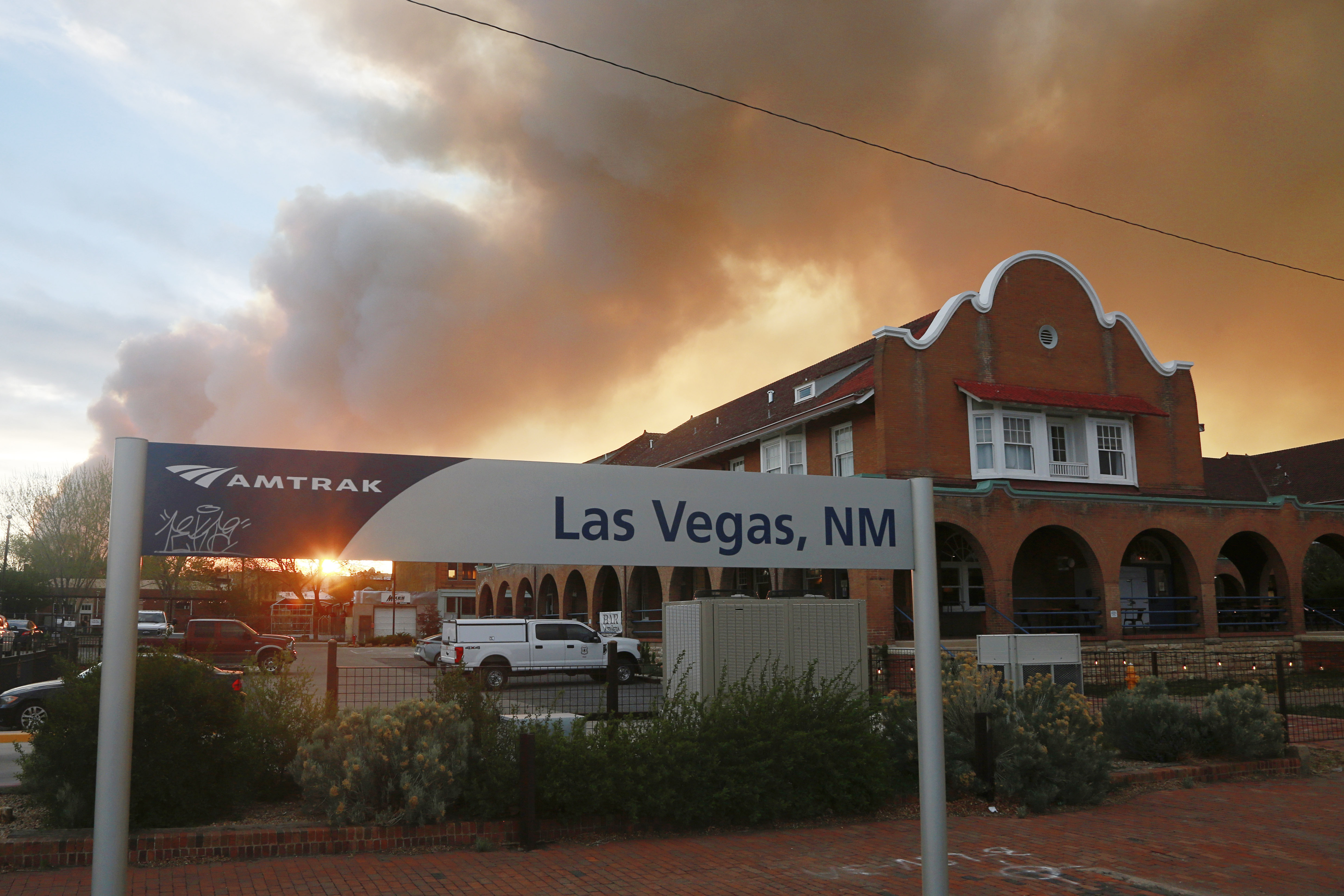 LAS VEGAS, N.M. — After a few days of calm that allowed some families who had fled wildfires raging in northeast New Mexico to return to their homes, dangerous winds picked up again Sunday, threatening to spread spot fires and complicate work for firefighters.

More than 1,500 firefighters were on the fire lines at the biggest blaze east and northeast of Santa Fe, which grew an additional 8 square miles overnight to an area more than twice as large as the city of Philadelphia.

A red-flag warning was in effect Sunday, kicking off what fire officials predicted would be another “historic, multi-day wind event that could result in extreme fire behavior.”

A few helicopters were able to gather new information from the air on the spread of the flames early Sunday “but they won’t be up there very long because of the winds out there,” fire spokesman Tom Abel said.

“They are predicting the wind to blow all day today, through the night, all day tomorrow so that is a long time for our fire,” he said.

Thousands of residents have evacuated due to flames that have charred large swaths of the Sangre de Cristo Mountains in northeastern New Mexico — a total of 275 square miles.

The good news, Abel said, is additional fire crews continue to arrive from around the West.

For many California firefighters backing up local units, the winds in New Mexico are puzzling. Unlike the sustained Santa Ana winds in Southern California, the air around the Hermit’s Peak/Calf Canyon fires in New Mexico has swirled around and been redirected in complex and changing interactions with the mountains.

“We’ll see what happens,” said fire battalion chief Ryan Lewis, of Ontario, California, on a rare break with his firefighters at a local hotel that’s serving hot meals to fire workers and evacuees.

The worst of the thick wildfire smoke had blown out of some areas on Saturday, allowing residents of Las Vegas, New Mexico, to recapture a sense of normalcy Saturday as their rural neighbors hunkered down amid predictions of extreme fire conditions.

Shops and restaurants reopened, the historic town center was no longer just populated by firefighters, but there was a widely felt sense of anxiety, loss, and wariness of what lay ahead.

“It’s literally like living under a dark cloud,” said Liz Birmingham, whose daughter had persistent headaches from the smoke. “It’s unnerving.”

Nationwide, close to 2,000 square miles have burned so far this year. The last time this much fire had been reported this early in the year was 2018, according to the National Interagency Fire Center. And predictions for the rest of the spring do not bode well for the West, where long-term drought and warmer temperatures brought on by climate change have combined to worsen the threat of wildfire.

The threat to Las Vegas, a city of 13,000, was reduced after vegetation was cleared to create containment lines. Local officials on Saturday allowed residents of several areas on the city’s northwestern outskirts to return to their homes, Berlin said.

The city had looked like a ghost town earlier in the week, with businesses shuttered, schools closed and the tourist district empty but for resting firefighters. By Saturday, it was in a partial state of recovery.

National Guard troops carried cases of water, people lined up to sign up for relief from the Federal Emergency Management Agency and U.S. Sen. Martin Heinrich, a Democrat, met with local officials and toured the shelter housing some of the displaced.

“We don’t know if our houses are getting burned, or if it’s gonna stop,” said Domingo Martinez, an evacuee from rural Manuelitas northwest of Las Vegas. “I hope it dies down so we can go home.”

Martinez, who is staying with his son on the east side of town, visited an old friend and neighbor who had been living in the middle school shelter for 15 days.

Outside the school, Martinez got a free haircut from Jessica Aragón, a local hairdresser who volunteered her time.

“I love that everyone is coming together,” Aragón said. “I think a smile is worth a thousand words.”