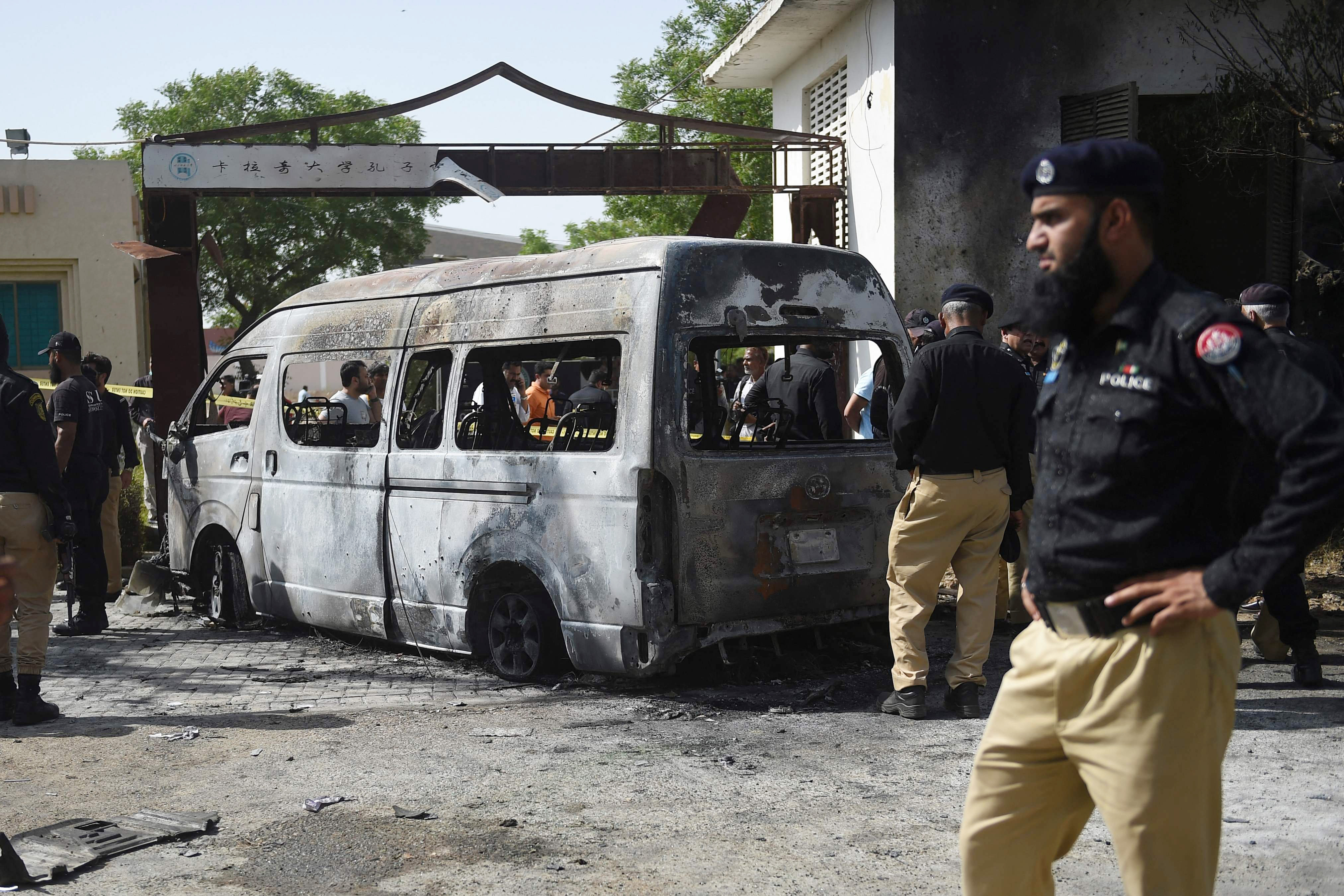 An explosion ripped through a van inside a university campus in southern Pakistan on Tuesday, killing three Chinese nationals and their Pakistani driver, officials said. A separatist militant group claimed responsibility and said the attack was carried out by a woman suicide bomber.

The bombing at the University of Karachi also wounded a fourth Chinese national, as well as a Pakistani guard accompanying the van, according to university spokesman Mohammad Farooq.

Karachi police chief Ghulam Nabi Memon said the initial investigation suggests a suicide bomber was behind the attack. He said that closed circuit television footage from the site showed a person dressed in the female burqa head-to-toe covering walking up to the van, followed by an instantaneous explosion.

The Chinese fatalities included the director of the Chinese-built Confucius Institute, which offers Chinese language graduate classes, and two teachers.

The Baluchistan Liberation Army, a militant group in nearby Baluchistan province, has targeted Chinese nationals in attacks in the past.

The group’s statement that followed Tuesday’s attack identified the bomber as Shari Baluch or Bramsh, saying she was the group’s first female bomber. The attack marks “a new chapter in the history of Baluch resistance,” the statement said.

Baluchistan has long been the scene of a low-level insurgency by armed Baluch groups demanding more autonomy and a greater share in the region’s natural resources if not outright independence from Islamabad.

However, the Pakistani Taliban have also targeted Chinese interest in the past. Last July, the group — also known as the Tehreek-e-Taliban Pakistan — claimed responsibility for an attack on a bus that killed nine Chinese nationals in Pakistan’s northwestern Khyber Pukhtunkhwa province. Four Pakistanis also died in that attack.

The Pakistani Taliban are a separate group from the Afghan Taliban, their allies who have seized power in neighboring Afghanistan.

Thousands of Chinese workers are living and working in Pakistan, with most of them involved in Beijing’s multi-billion dollar project known as “One Belt One Road Project” that is to connect south and central Asia with the Chinese capital.

A key road linking Pakistan’s southern port of Gwadar, in southwestern Baluchistan province, with China’s northwest Xinjiang province, is part of what is known as the China-Pakistan Economic Corridor. The project includes a number of infrastructure projects and several power projects.