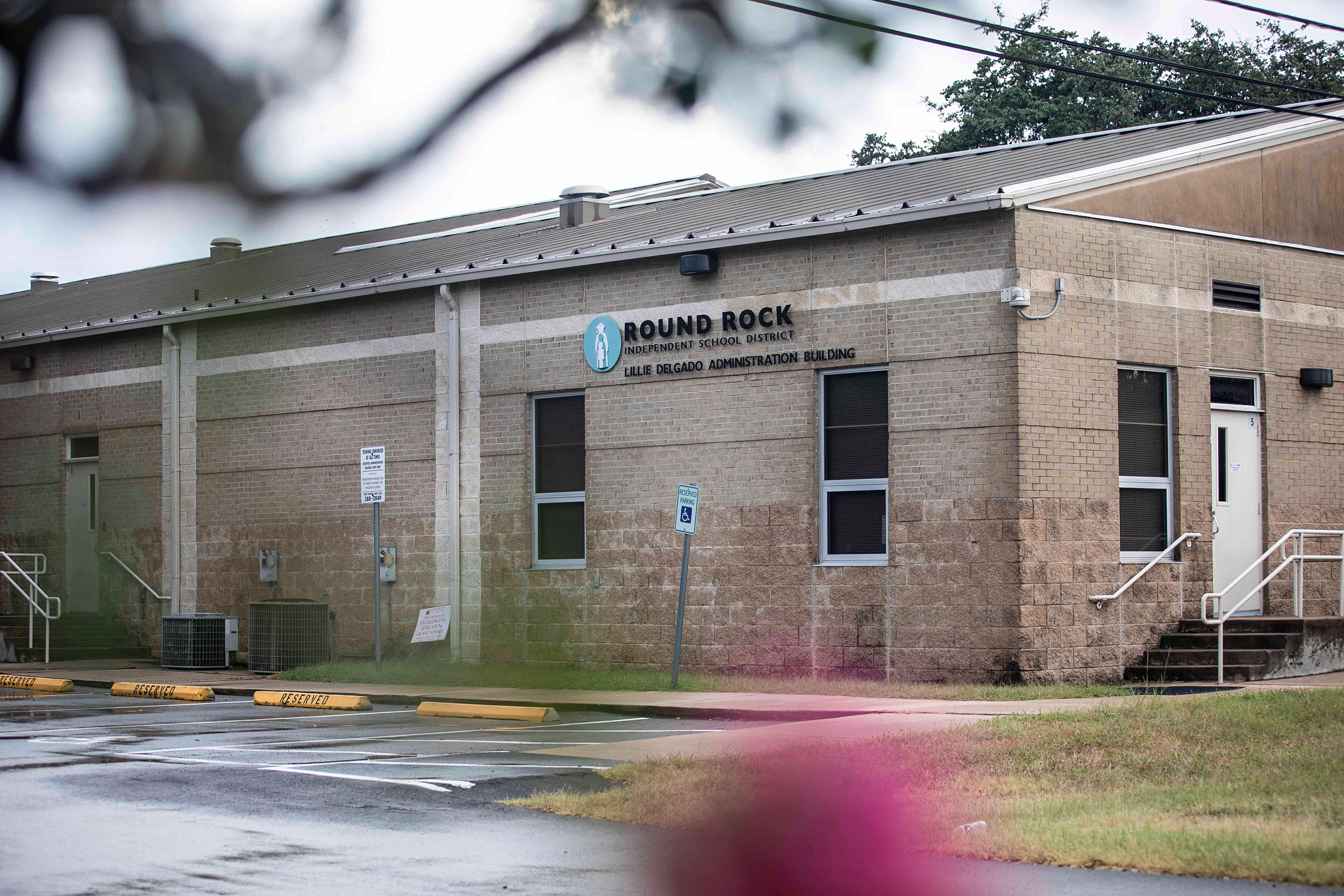 On the second day of high school in Texas, Natosha Daniels’ 14-year-old daughter went all day without eating because she didn’t want to remove her mask.

Her school has a couple of thousands of students, and the cafeteria was crowded. In addition, the Round Rock Independent School District outside Austin didn’t require masks, so some students weren’t wearing them. Even her honors biology teacher was maskless.

Daniels said her daughter, who like her is fully vaccinated, is terrified of bringing home the coronavirus because it could infect her 7-year-old sibling, who is too young for a shot.

“She was like, ‘Mama, I’m going to pass out,’” said Daniels, a member of the Round Rock Black Parents Association and former assistant principal in the district.

“Every morning I wake up with knots in my chest, just like, ‘Am I making the right decision, putting myself and my child at risk for my older two to go to school?’” said Daniels, who is immunocompromised. “And my husband was like, ‘Well, the option still stands for you to go get an Airbnb and move out’ with my youngest. … Do we sacrifice our savings? It’s so hard.”

After a difficult year or more of virtual learning, parents are eager to have their children back in classrooms. But even as the highly transmissible delta variant surges, school districts like Daniels’ aren’t beefing up protocols to prevent infections. Masks aren’t mandated or enforced, according to teachers, parents and officials in several states. Physical distancing is nearly impossible. To top it off, students exposed to the virus may not be required to quarantine despite guidelines from the Centers for Disease Control and Prevention, risking an even more rapid spread among children, the youngest of whom aren’t yet eligible for vaccination.

The CDC advises people who have had close contact with infected people — within 6 feet for at least 15 minutes over a 24-hour period — to quarantine for up to 14 days. (It exempts vaccinated people without symptoms.) This summer, the agency drafted an exception for schools: It’s not considered close contact if both the infected and the exposed students “correctly and consistently” wore masks. That means an unvaccinated but masked student who was exposed wouldn’t have to quarantine.

But whether school districts follow CDC guidelines is an open question. And in many cases, counties, states and the CDC don’t issue the same advice.

Even if districts follow CDC guidance, success hinges on whether students consistently wear masks. In Round Rock, for example, quarantining is “strongly” recommended for students and staff members who have had close contact with those who are infected, in essence leaving it up to parents whether to take children out of school.

“There is more transmission occurring in a school setting than there is in the community right now,” Stewart said, “which is the exact opposite of what happened last year.”

The country’s largest school districts are largely not following the CDC’s close contact exception for masked students, said Bree Dusseault, an analyst at the Center on Reinventing Public Education, a nonprofit research organization, who is tracking state and district policies. The center reviewed 100 large and urban school districts and found that most of them gave students who are fully vaccinated and have close contact with infected students exemptions from quarantining. Some require Covid testing for students to return earlier, while others exempt those who’ve recently recovered from Covid-19 and, it’s assumed, have antibodies.

“Districts are managing on-the-ground politics,” Dusseault said. “You may find leaders relying less on scientific recommendations and data and more on local preferences” and on “what they’re hearing.”

Debra Pace, superintendent of the School District of Osceola County in Florida, said, “We know that masks aren’t perfect.” Fully vaccinated people without symptoms are exempt from quarantining, but Osceola schools require any exposed students to quarantine for four to 10 days, depending on whether they showed symptoms or had negative tests.

“The delta variant is very different,” Pace said. “As much as I hate to quarantine kids, if we don’t quarantine, we risk having to shut a school down, which we absolutely don’t want to do.”

Every school’s decision about who counts as a close contact affects contact tracing, a laborious process officials use to slow the spread of disease. The CDC’s guidance curtails the number of school-based contacts for follow-up. Epidemiologists support the CDC’s approach, said Janet Hamilton, executive director of the Council of State and Territorial Epidemiologists. She said having clear consequences for not wearing masks seems to resonate with parents: Kids who don’t mask up will miss more school.

“So many parents are interested — and I think rightly so — in having their children have in-person learning,” Hamilton said.

In Round Rock, protocols are squishy in part because state orders and guidelines conflict with federal recommendations. Only after the courts got involved did the Round Rock district add a strong mask mandate on Thursday — a week into school, after dozens of new cases and hundreds of new close contacts among students were reported.

Ben Sterling, president of Education Round Rock, the local teachers union, said staffers and students alike aren’t given incentives to follow Covid rules, particularly related to quarantining. One round of quarantine would use all 10 days of personal and sick leave staff members get annually. Those days roll over, but Sterling knows of teachers with health issues who haven’t banked any. “The ones who are most vulnerable are going to get hit hardest, as per usual,” he said.

Dusseault said Round Rock’s policy is unusual because it’s optional. But it’s hardly alone — the neighboring Leander Independent School District has a similar policy. Round Rock requires anyone who tests positive for Covid-19 or is a probable case to quarantine for 10 days. For close contacts, it’s merely suggested, “because parents and students have a right to a free, appropriate public education under the federal law,” said Jenny LaCoste-Caputo, Round Rock’s chief of public affairs and communications.

Leniency about Covid safety doesn’t sit well with Natosha Daniels. “I feel sick,” she said. “At best, they are, like, caving to this violent group of right-wing parents, and, at worst, it’s like a blatant willingness to increase our community spread.”

Quarantining isn’t required for Round Rock employees because they would have to use personal and sick leave, LaCoste-Caputo said. The board of trustees approved Covid leave only for staff members who test positive.

Amy Weir, president of the Round Rock district board of trustees, said it’s also “just not having the backing of our state government.”

The Texas Legislature didn’t fund virtual learning, so school districts are covering the costs themselves. Weir said Round Rock is paying $17.5 million to offer virtual learning for students younger than 12, who can’t get vaccinated. For older students, teachers upload handouts of curated lessons.

On the second day of classes, the middle school where Sterling teaches had its first case. He and another teacher said the student who tested positive was sometimes maskless and around others without masks. Yet, they said, the school told the families of the child’s classmates that no one was a close contact.

The school, they said, isn’t requiring seating charts, which would help staff members track student movement, nor do school officials know who is vaccinated or unvaccinated, which factors into the school district’s close-contact definition. It’s all handled on the honor system.

“You’re saying choose between going to work and quarantining your child for 10 days,” Daniels said. “This is the world that we are in — creates these systems that leave parents with no choice.”

KHN (Kaiser Health News) is a national newsroom that produces in-depth journalism about health issues. Together with Policy Analysis and Polling, KHN is one of the three major operating programs at KFF (Kaiser Family Foundation). KFF is an endowed nonprofit organization providing information about health issues to the nation.