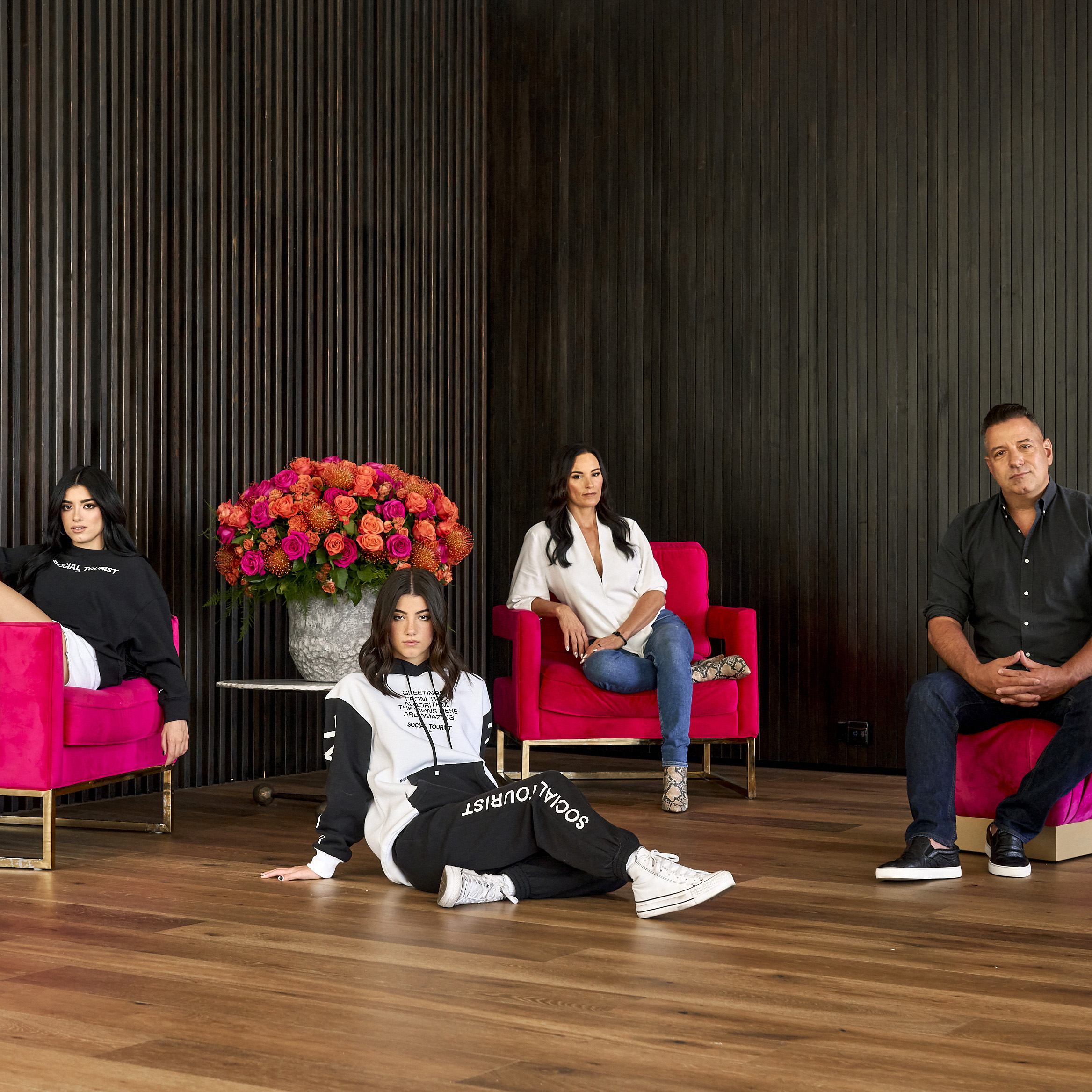 The first family of TikTok has landed on Hulu.

On Friday, the streaming service debuted its new series, “The D’Amelio Family,” which follows the behind-the-scenes lives of TikTok influencer siblings Charli, 17, and Dixie, 20, and their parents, Marc and Heidi D’Amelio, as they navigate social media stardom.

The show marks the family’s launch into a more old-fashioned format: television.

After using their phones and social media as a vehicle to connect with their followers, the D’Amelios said they’re excited to explore a more traditional entertainment medium — a step that a handful of other influencers have tried with little success in the past.

“We haven’t had the proper place to say these things in the way we want to say them — whether it’s how we’re actually dealing with this all mentally or topics on how we feel we’ve been treated by the internet,” Charli, who is the most followed person on TikTok (currently with more than 123 million followers), told NBC News ahead of the show’s release. ” I feel that those are things that they want to hear.”

Charli began her rise to influencer superstardom on TikTok in late 2019, and grew in popularity by performing dance trends. Dixie’s fame — and following — came shortly after.

“We were posting videos on the internet. For a long time, people didn’t even hear our voice,” Dixie said. “We all feel like it’s important for people to see what it was like when the phones were turned off.”

The family already has its own YouTube channel, which has more than 1.6 million subscribers. But the show goes even deeper into their lives.

Marc said he initially didn’t know why Hulu wanted to make a series about his family, but after filming began, he realized showing the ups and downs of his daughters’ lives online might help other young people dealing with their own social media presence.

“Everyone deals with how to navigate online and that’s what I think this show depicts, and hopefully people will get something out of it,” he said.

While the sisters said they enjoy reality TV shows, like “Dance Moms” and “Selling Sunset,” they don’t see their new series as a foray into “Real Housewives” or “Keeping Up with the Kardashians” territory.

“We told [Hulu] we do not want this to be drama-filled,” Charli said. “We do not want to be flipping tables. That’s not us, that’s not true and we’re not going to put that out there.”

That’s not to say they haven’t had drama-filled moments in their lives.

In November, the family faced backlash for a video in their series called “Dinner with the D’Amelios.” Charli was criticized for making faces when personal chef Aaron May, a friend of the family, described dishes he was making for them at dinner, which included paella. She also made faces and gagging noises while trying it. As a result, she lost followers on TikTok, and posted an emotional livestream in which she said she had not “meant to be hurtful or truly meant to put anyone down.”

A lot has changed since then, and Hulu is hoping the influencers’ millions of followers will tune in to see how fame has affected the family.

In December, when the show was announced, Belisa Balaban, Hulu’s vice president of documentaries, said in a statement that the streamer is excited to “partner with the D’Amelio family to offer viewers an authentic look at the complicated lives of these two relatable young women thrust to the top of the social media algorithm.”

She added that the the show joins the streamer’s already “growing slate of docuseries about the human experience.”

Hollywood has spent many years trying to capitalize on social media stars’ success and popularity with less than glowing outcomes.

For example, in 2015, “The Grace Helbig Show,” which was a short-lived talk show on E! fronted by Helbig, a YouTube star with more than 2.6 million subscribers, only aired for one season. “Haters Back Off,” a Netflix show which starred YouTuber Colleen Ballinger, who has nearly 11 million subscribers on her channel “Miranda Sings,” received lackluster reviews. It was canceled after two seasons. Earlier this year, YouTube star Lilly Singh’s late-night program on NBC, “A Little Late With Lilly Singh,” ended after two years.

Still, the leap could prove successful.

Dixie, along with TikTokers Bella Poarch and Addison Rae, have already launched relatively successful music careers. Rae also starred in Netflix’s recent release “He’s All That,” which despite having poor reviews, generated buzz on social media.

Leading up to the show’s release, the D’Amelios have been using their massive following to promote it heavily, uploading clips and trailers to their TikTok accounts. The show also has its own TikTok account, which as of Friday had amassed 518,400 followers.

Some fans of the D’Amelio sisters said they are excited to see their favorite influencers in a different medium.

Rima Odat, a Chicago teen who runs a Twitter fan page dedicated to Charli, said she plans to have watch parties with her friends around the world.

“It’s a big deal, so we’ll probably message each other and say what our favorite parts of the show during each episode, and I just think that’s really fun,” she said.

She’s already started tweeting her thoughts on the show.

Diana Alexe, 14, who lives in Europe and runs an Instagram fan page dedicated to Dixie, said she’s hoping to feel an even stronger connection with the stars after watching the series.

“I am excited because we will see how their lives really are,” Diana said in an Instagram message. “It’s kind of hard to see feelings through some [social media] posts so the show will help us have a better connection with them, and I hope that people are going to realize their lives aren’t perfect either.”

In response to a tweet from Charli asking fans what their favorite part of the show was so far, many replied with positive feedback.

“Um why’s the D’Amelio family getting a reality show !?” one person tweeted.

“So the d’amelio family really got their own reality show on hulu,” another person wrote.

And some just aren’t used to paying for the entertainment they consume.

“This actually seems entertaining but I don’t have Hulu,” one TikTok user said in a comment on Charli’s recent video featuring a trailer of the show.