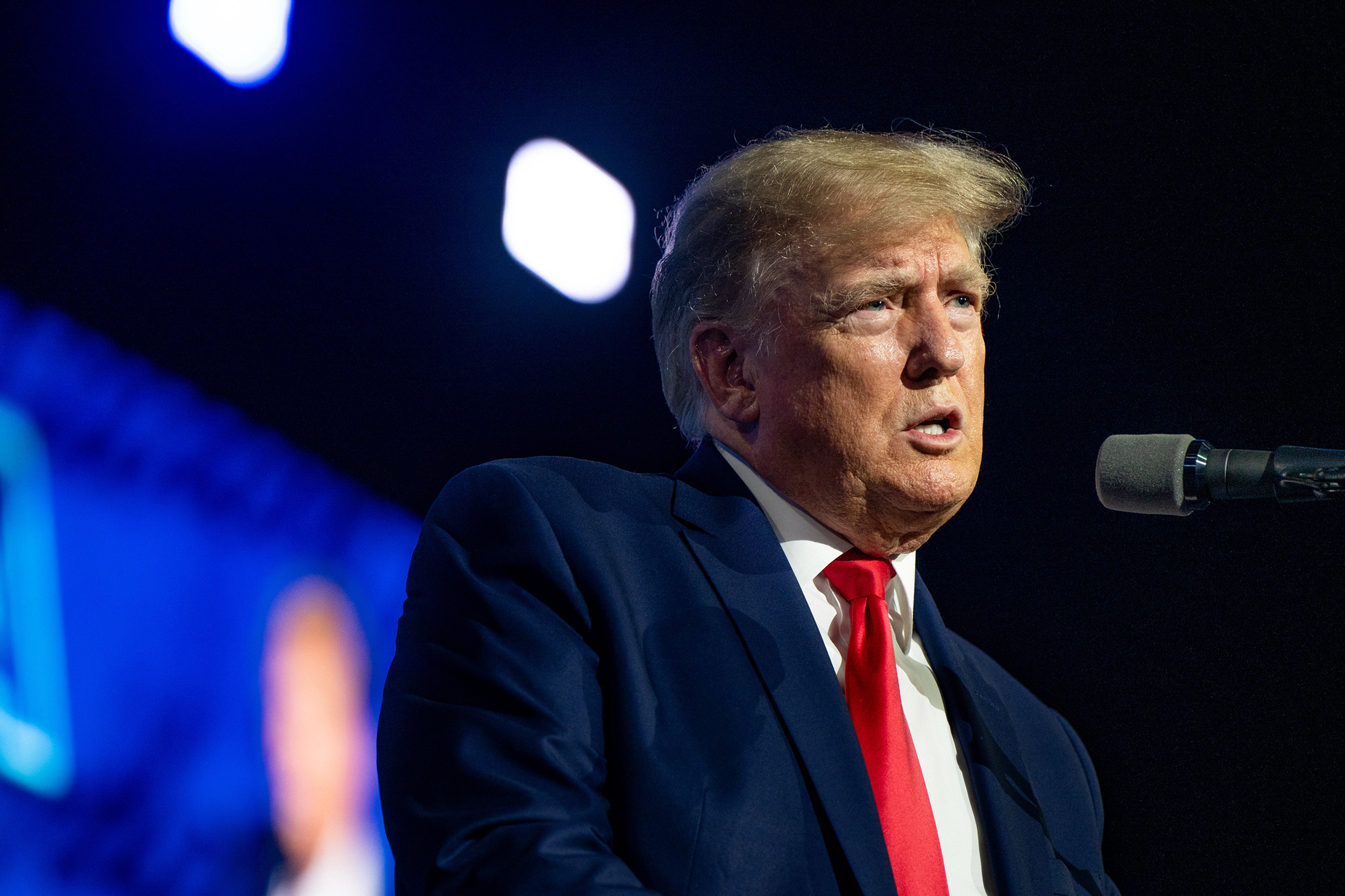 Undeterred by Tuesday’s school shooting a few hundred miles away, former President Donald Trump headlined the National Rifle Association’s annual legislative conference in Houston on Friday and called for “a top-to-bottom security overhaul at schools across this country” in addition to “drastically” changing the U.S. approach to mental health.

It was a welcome message for the embattled NRA, which has been plagued by scandal and embroiled in litigation. Had Trump skipped the event, he would have been in good company: Texas Gov. Greg Abbott pulled out of a planned appearance in favor of a return visit to Uvalde, Texas, where a gunman killed 19 students and two teachers in an elementary school Tuesday. Abbott provided pre-recorded remarks to the conference, which Sen. John Cornyn and Rep. Dan Crenshaw of Texas also backed out of, citing scheduling conflicts.

“Unlike some, I didn’t disappoint you by not showing up,” Trump said at the start of his remarks.

Trump described the Uvalde shooting as “a savage and barbaric atrocity” and called for a moment of silence as he read the names of the 21 victims. The former president said those killed “are now with God in heaven” while the shooter “will be eternally damned to burn in the fires of hell.”

Trump then laid into President Joe Biden for urging Congress to take up gun safety legislation, saying Biden’s criticism of the gun lobby was really directed at gun owners across the country.

But Trump also called for action, arguing there are steps that can be taken to prevent mass shootings.

“While we don’t yet know enough about this week’s killing, we know there are many things we must do,” he said. “We need to drastically change our approach to mental health. There are always so many warning signs. Almost all of these disfigured minds share the same profile.”

“Teachers, parents, school officials, and community members need to be recognizing and addressing these alarm bells promptly and very, very aggressively,” he continued. “And our school discipline systems, instead of making excuses and continually turning a blind eye, need to confront bad behavior head on and quickly. And clearly we need to make it far easier to confine the violent and mentally deranged into mental institutions.”

In calling for increased school security, Trump echoed other Republicans in suggesting schools must transition to having only a single point of entry, implement metal detectors and employ an armed security officer at all times. Trump also said teachers should be able to be armed on school property.

“If the United States has $40 billion to send to Ukraine, we should be able to do whatever it takes to keep our children safe at home,” Trump said. “We spent trillions in Iraq, trillions in Afghanistan, and got nothing. Before we nation-build the rest of the world, we should be building safe schools for our own children in our own nation. Right?”

At the same time, increased spending, security and training preceded the shooting in Uvalde, where Robb Elementary School had invested in a significant safety plan. The school had hired security officers and erected fencing around the building. Teachers were under instruction to keep classroom doors locked, and students routinely went through drills to prepare for an active shooter.

Those efforts did not prevent Tuesday’s massacre.

Trump dedicated a significant portion of his speech to boosting the police, at one point going so far as to suggest he would “no longer feel obligated” to defer to state and local governments to respond to protests that turn violent if he were to be president again.

“I would crack down on violent crime like never before,” he said.

Trump also veered sharply off topic in his campaign-style speech. As is the case in virtually all of the former president’s remarks following his 2020 loss, Trump decried a “rigged election,” elevating the false claim that widespread voter fraud and malfeasance by election administrators cost him a second term.

And while those comments were far afield from the debate over gun laws, it was an appropriate venue nonetheless.

Few national organizations have been as important to Trump’s political fortunes as the NRA, the country’s most prominent pro-gun rights group. In the 2016 presidential election, Trump won 63 percent to 31 percent among voters who lived in gun-owning homes, while losing 65 percent to 30 percent among those who didn’t.

As he considers a third bid for the presidency — and as other Republicans with similar support for gun rights do the same — Trump has tremendous incentive to tighten his ties to the NRA and the gun owners who make up its more than 5 million members.

From the White House, Trump delivered prized victories to the gun lobby by nominating Supreme Court justices — Neil Gorsuch, Brett Kavanaugh and Amy Coney Barrett — who have expansive views of the Second Amendment’s protection of the right to bear arms.

He also nixed an Obama-era rule adding people with mental illnesses to the national background-check system.

And, despite thorough negotiation of potential statutory and executive actions that could be taken to counter mass shootings, Trump did little to change policy from Washington. He signed a broader law that strengthened the existing background-check system and issued a regulation to ban bump stock devices that make it easier for shooters to fire multiple rounds quickly.

When he considered pushing to expand background checks to cover many more transactions, the NRA was quick to deter him. Likewise, his flirtation with supporting a “red flag” law to take guns away from people deemed to pose a risk did not result in any federal action.

He made no mention of expanded background checks or red flag laws in Friday’s address.

The shootings in Texas this week, where law enforcement officers waited outside as the gunman shot children and teachers, injected an awkward dissonance into Trump’s long-held view that more guns are the answer to mass shootings.

He echoed that line on Friday.

Because of Secret Service protocols surrounding Trump’s appearance, attendees were advised by the NRA that they would not be allowed to bring guns into the assembly hall where Trump spoke — and that there would be “no storage available for firearms.”