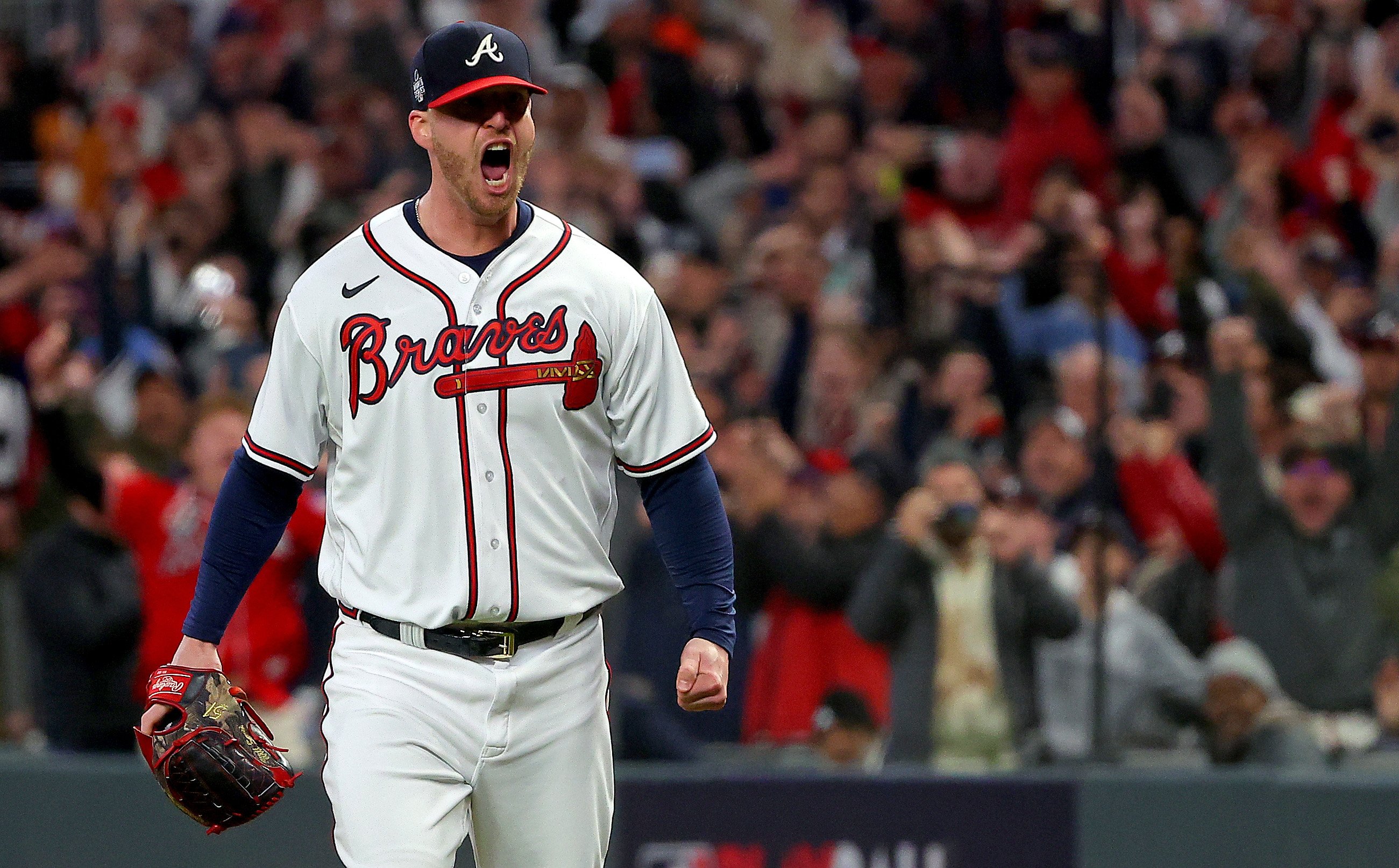 ATLANTA (AP) — This Atlanta Braves team couldn’t have picked a more fitting way to move to the brink of a World Series championship.

A pitcher who spent most of the year in the minors kept ’em in it.

A slugger who came in a flurry of trades won it for ’em.

If this gritty bunch can do it one more time, the Braves will have their first Series title in 26 years.

Dansby Swanson and pinch-hitter Jorge Soler connected for back-to-back homers in the seventh inning Saturday night, propelling the Braves to a 3-2 victory over the Houston Astros and a commanding 3-1 Series lead.

Game 5 is Sunday night. The Braves can wrap up the championship on their home field, just as they did two stadiums ago when they beat the Cleveland Indians in 1995.

They’ve sure been tough at home, improving to 7-0 this postseason.

“It’s just such a cool moment for this city,” Swanson said. “But we’ve got one more. They’ve got a great ballclub over there and we can’t take anything for granted.”

That triumph more than a quarter-century ago at the old Atlanta-Fulton County Stadium remains the franchise’s only World Series crown since moving to the Deep South in 1966.

This is the closest the Braves have been to a second title since then.

What an improbable crown it would be.

The Braves stumbled along at .500 or worse until Aug. 6. They had to rebuild their entire outfield before the July 30 trade deadline after Ronald Acuña Jr. went down with a knee injury and Marcell Ozuna was sidelined by a hand injury and legal troubles. They won the NL East with just 88 wins, the fewest of any playoff team — and less even than two teams that didn’t make the postseason.

With former president Donald Trump watching from a private box down the right-field line, the Braves got a huge boost from a most unlikely player.

Former first-round draft pick Kyle Wright, who made only two appearances in the majors during a season spent mostly at Triple-A Gwinnett, got through 4 2/3 critical innings out of the bullpen after surprise starter Dylan Lee retired only one hitter.

Wright was hardly overpowering, giving up five hits — including a solo homer by Jose Altuve in the fourth that staked the Astros to a 2-0 lead — and three walks. But he continually pitched out of trouble, giving the Braves a semblance of hope until the offense woke up.

“He probably doesn’t realize what he did, how big it was,” Atlanta manager Brian Snitker said. “I’m so proud how he handled the situation.”

“Honestly, I was a little lost,” he conceded.

He found himself just in the nick of time for the Braves.

In the sixth, Eddie Rosario became the first Atlanta hitter to get past first base with a one-out double off Brooks Raley.

Rosario wound up scoring on another clutch postseason hit by Austin Riley, who lined a two-out single to left against Phil Maton.

The Braves left the bases loaded, but they weren’t done. Just like that, they stunningly engineered the first lead change of the entire Series, with Swanson and Soler becoming the third duo in World Series history to hit back-to-back homers that tied and put a team ahead.

The first two guys to do it were named Babe Ruth and Lou Gehrig.

Facing Cristian Javier, Swanson went the opposite way for a homer that tied the game at 2, the ball hit so hard that it ricocheted off the tabled section in the right-field stands and rolled all the way back to the infield.

“It was like, ‘You know what? Let’s get rid of everything else and just compete,’” Swanson said. “And you know what? Something amazing happened.”

The celebration had barely simmered down when Soler, one of four outfielders acquired in trades by general manager Alex Anthopoulos, stepped to the plate as a pinch-hitter.

On a 2-1 pitch from Javier, Soler put a charge into a hanging slider and drove it into the Astros’ bullpen in left. Yordan Alvarez was left hanging helplessly atop the short fence as the ball sailed over his head.

Luke Jackson worked a scoreless eighth, getting a great catch from Rosario slamming into the same left-field wall that Soler homered over, and Will Smith worked a 1-2-3 ninth for his sixth save in six chances this postseason.

The Astros could only kick themselves for squandering countless chances, going hitless in eight at-bats with runners in scoring position and leaving 11 on base overall.

Seven teams have come back from a 3-1 deficit to win the World Series, with the Cubs being the most recent in 2016.

The Braves certainly know it’s not over. Last year, they squandered a 3-1 lead in the NL Championship Series and lost to the Dodgers.

Houston got just what it wanted from 38-year-old starter Zack Greinke, who threw four scoreless innings.

The bullpen just couldn’t hold it.

“Just basically focus on one game at a time. That’s it,” Altuve said. “If we win tomorrow, then try to win Game 6 and see what happens. But we’ve got to focus on one game, and that game is tomorrow.”