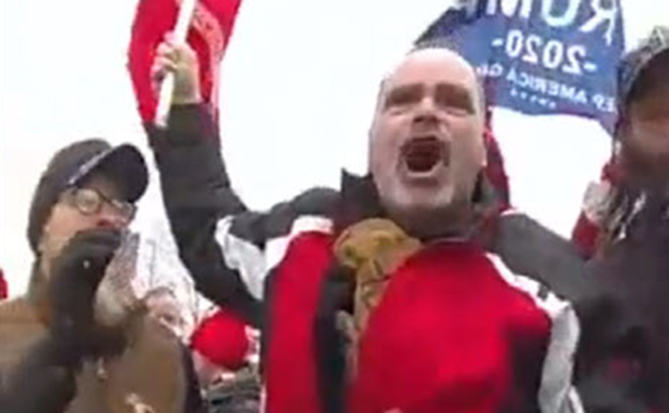 The Justice Department identified the man in the footage as Thomas Webster, who was indicted in February in connection with the Jan. 6 attack.

He can be seen in the video challenging police to take off their masks and protective headwear outside the U.S. Capitol before suddenly charging at them, officials said.

“You communist motherf—–, f— you,” he shouted before pushing down the crowd-control barrier and swinging a flag pole, according to authorities.

Webster, 54, tackled at least one officer during the melee, they said.

The clip released Thursday matches details outlined in a criminal complaint filed on Feb. 19, ahead of Webster’s surrender to authorities on Feb. 22.

He “proceeds to break through the metal barricade and begins charging toward (a Washington, D.C., police officer) with clenched fists,” officials said in the complaint.

“Webster ultimately lunges at (the officer) and tackles him to the ground,” they added. “Webster’s assault of (the officer) while on the ground lasts approximately ten seconds.”

The FBI distributed “be on the lookout for” pictures of him before a high school administrator recognized him as a parent who regularly drops his child off at school.

He remains in custody on multiple charges, including assault, disorderly conduct and engaging in physical violence in a restricted area. He previously pleaded not guilty to all the charges.

His attorney could not be immediately reached for comment on Friday.

Scores of protesters, egged on by then-President Donald Trump’s false claims of election fraud, invaded the U.S. Capitol on Jan. 6 in hopes of overturning the 2020 election results. More than 480 people have been charged with federal crimes related to the riot.