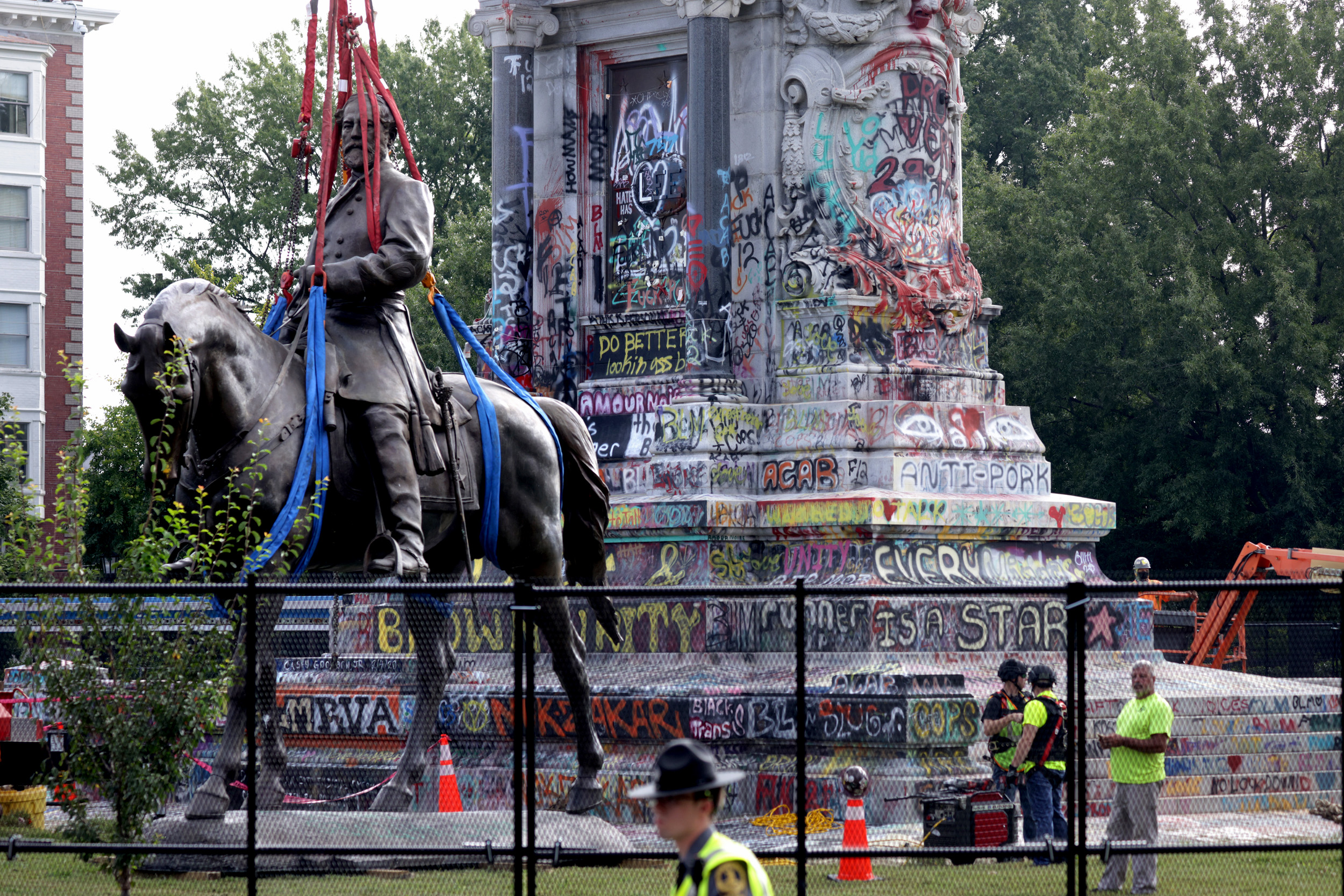 Virginia Gov. Ralph Northam announced Sunday that his administration will remove an enormous pedestal that until earlier this year held a statue of Confederate Gen. Robert E. Lee in Richmond.

The announcement marks a reversal in course from September, when the statue was removed but the Democratic governor said the 40-foot-tall pedestal, currently covered in graffiti, would stay.

His administration also announced plans to transfer ownership of the grassy island in the middle of a traffic circle where the statue was located to the city of Richmond.

The move comes about a month before Northam leaves office and Republican Gov.-elect Glenn Youngkin, who has expressed less enthusiasm about the statue’s removal, is sworn in.

“It was important to us that we do it now and before we leave office,” said Alena Yarmosky, Northam’s spokeswoman.

The deeding of the land, which was given to the commonwealth in the 19th century, was a request from the city so that the parcel could come under local control, Yarmosky said. State ownership has created logistical headaches with maintenance and security, she said.

Preliminary work on the pedestal removal was expected to begin Monday, with the project expected to be “substantially complete” by Dec. 31, according to a news release.

The Lee statue, a one-of-a-kind bronze equestrian piece installed in 1890, was perched in the middle of the traffic circle, part of a collection of other Confederate statuary along Richmond’s historic Monument Avenue. The statue, which had drawn criticism as a symbol of racial injustice, was hauled away in September to cheers from onlookers.

Northam ordered its removal in the summer of 2020 amid the nationwide protest movement that erupted after the murder of George Floyd by a police officer in Minneapolis. But litigation tied up his plans until this year.

“In 2020, we can no longer honor a system that was based on the buying and selling of enslaved people,” he said when announcing his decision to remove the statue.

The day it was hauled away, he said, marked “a new day, a new era in Virginia.”

In September, when The Washington Post pressed a Youngkin campaign spokesman for the then-candidate’s position on the removal, the spokesperson said Youngkin agreed with the decision. Youngkin has said the statue belongs in a museum or on a battlefield, as an opportunity to teach about history, and he has criticized the “graffiti and violence” that went along with many protests over Confederate monuments.

The Lee statue was one of five enormous Confederate tributes along Richmond’s Monument Avenue and the only one that belonged to the state. The four city-owned statues were also removed following Floyd’s killing after they became focal points in protests.

In September, Northam said the pedestal would remain in place so its future could be determined by a community-driven effort to reimagine Monument Avenue, an initiative being led by an arts museum and currently in a very early stage.

“This land is in the middle of Richmond, and Richmonders will determine the future of this space,” Northam said in a statement Sunday. “The Commonwealth will remove the pedestal and we anticipate a safe removal and a successful conclusion to this project.”

The city said in a statement that it planned to accept the donation “following the proper legal steps.”

“The Mayor appreciates the Governor’s willingness to transfer this land back to city control,” Jim Nolan, a spokesman for Mayor Levar Stoney, said in a statement. “And because the Mayor believes Richmond deserves a clean slate when we take it, he supports the Governor’s decision to remove the pedestal.”

The governor’s administration searched unsuccessfully in September for a time capsule that was thought to be tucked underneath the pedestal and even installed a new one. If the 1887 time capsule is recovered during the disassembly process, the state will take it into possession, the news release said, and attempt to preserve its contents.

The pedestal parts will be stored until next steps are determined, according to the news release.

Nolan said the mayor believes the pedestal, or parts of it, can and should be preserved in a museum, instead of in the middle of a street in a residential area. He noted that the city is in the process of removing the pedestals of the statues it already owns.

The pedestal has been covered in graffiti, some of it profane and much of it denouncing the police. It has drawn some acclaim as a work of protest art, and some community members have advocated that it should remain.

After Floyd’s death, the traffic circle became a gathering spot for activists, who informally renamed it in honor of Marcus-David Peters, a young Black man who was killed by a police officer during a mental health crisis after he threatened the officer.