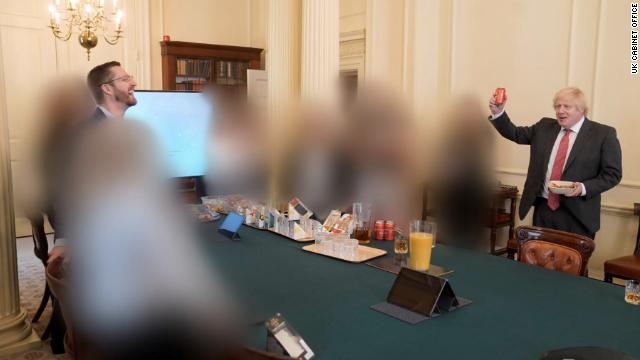 But then came the first revelation of a Christmas party in Downing Street a year prior, when Britain was living under severe virus restrictions.

That story, first reported in late November 2021, started a flood of damning allegations of parties, social gatherings, drinks and garden events that took place at the heart of Johnson’s government during various stages of lockdown.

Johnson initially denied that any party took place, and insisted that rules were followed inside Downing Street.

But months later, the police said they would investigate several such gatherings. Johnson himself was fined for attending a birthday party, held in his honor, in which he was photographed raising a beer with staffers. In all, 126 fines were issued by police over parties inside government.

A damning report into what became known as the Partygate scandal was published late last month by senior civil servant Sue Gray. She criticized a culture of rule-breaking events, and wrote that “the senior leadership at the centre” of Johnson’s administration “must bear responsibility” for a culture that allowed the parties to take place.

She added there is “no excuse for some of the behaviour” she investigated, which included “excessive alcohol consumption.” Logs of email exchanges were also featured, including some where staff openly discussed hiding their partying from the media.

Speaking in Parliament moments after the report was published, Johnson said he was “humbled” and has “learned my lesson,” adding: “I take full responsibility for everything that took place on my watch.”

But he also repeated previous claims that parties only escalated after he left, and insisted he was “surprised and disappointed” that several drink-fueled events took place.

And he suggested that the cramped quarters of the government buildings and the “extremely long hours” of his staff responding to the Covid-19 crisis could explain why several parties and social events took place.

The scandal has shattered Johnson’s reputation and led to outrage among the public. Millions of Britons were unable to socialize or visit sick relatives in hospital during Covid-19 lockdowns, a stark contrast from the actions revealed in Gray’s report.

According to a snap poll from Savanta ComRes published after the report, two thirds of Britons (65%) said that Johnson should resign over the findings.

Johnson has faced criticism on other issues, including his handling of the cost of living crisis, but it is Partygate that has most directly led to Monday’s vote on his political future.